If Orion is being designed for interplanetary space travel, where will the crew live for the long duration? The Orion Crew Module is not much bigger than Apollo and I would not think a crew of 4-6 could spend months in such a small space unless they were in some sort of hibernation.

The Orion Service Module does not extend the habitat area, but it does extend the configuration's life support capabilities by, according to ESA, providing propulsion, power, thermal control, as well as supplying water and gas to the astronauts in the habitable module. The Orion MPCV (Multi-Purpose Crew Vehicle) however will come with NASA Docking System, allowing it to mate in orbit with other modules, such as e.g. Deep Space Habitat. Wikipedia on Orion MPCV puts it like this:

The MPCV resembles its Apollo-era predecessors, but its technology and capability are more advanced. It is designed to support long-duration deep space missions of up to 21 days maximum active crew time plus 6 months quiescent. During the quiescent period crew life support would be provided by another module such as a Deep Space Habitat. The spacecraft's life support, propulsion, thermal protection and avionics systems are designed to be upgradeable as new technologies become available.

And here's an image of a concept full-length Orion configuration, again from ESA pages: 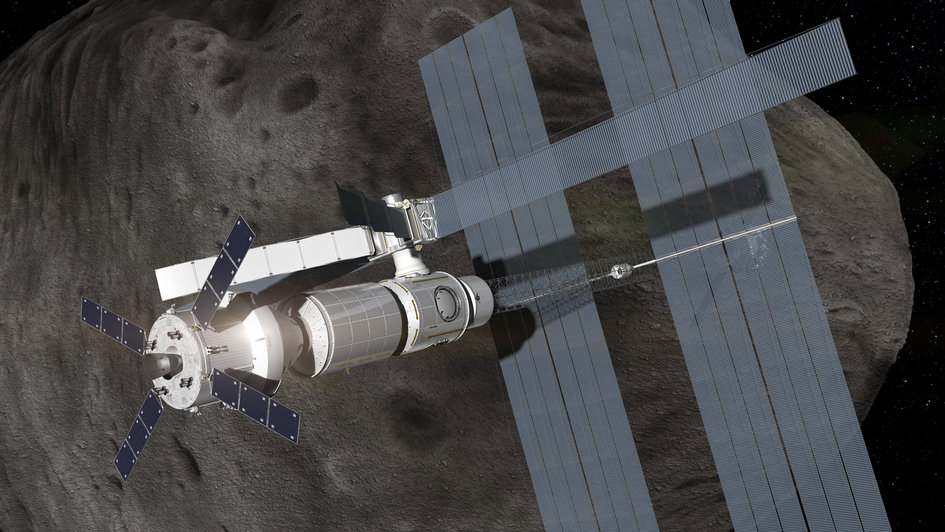 So no, the Orion Crew Module itself, or together with the Orion Service Module aren't enough to support long duration manned missions beyond cislunar space or missions of over 21 days maximum active crew, and the Crew Module and Service Module that will be launched atop the SLS (Space Launch System) Crew Block will have to dock in-orbit with previously launched Deep Space Habitat or other habitat modules atop the SLS Cargo Block launchers.

One proposal is for a Mars Transfer Vehicle (MTV) for the astronaut crew. The MTV has been given the name Copernicus, for the 16th century mathematician. This vehicle will be constructed on earth, and lifted into Low Earth Orbit (LEO) by several heavy lift SLS vehicles. The MTV will then need to be assembled; either in LEO or at the Mars-Earth Lagrange Point. Copernicus (~93.7m long) will consist of 3 basic components: 1) Crewed payload element (~33.8m long), 2) a propulsion module, and 3) an integrated saddle truss & LH2 propellant drop tank assembly that connects the payload and propulsion elements. The payload consists of an inflatable Crew Transfer Habitation (CTH) (also called a Transhab), a long life CEV/SM for vehicle to vehicle transfer as well as end-of-mission Earth entry, a secondary T-shaped docking module, a contingency consumables container, and a connecting structure.

Two cargo vehicles would make the trip to Mars 1 to 2 years ahead of the crew, and will be used to pre-deploy a cargo lander to the landing site, and a habitat lander that is placed in Mars orbit. Once these vehicles check out, the MTV is readied and departs. Following the trans-Mars insertion maneuver, the drained LH2 drop tank is jettisoned. Once in Mars orbit, the MTV rendezvous with the awaiting orbiting hab lander.

Not the answer you're looking for? Browse other questions tagged interplanetary or ask your own question.

12
How do long-flight space probe teams preserve the interest and the know-how?
17
How do we make a round-trip journey to Mars?
14
Has an interplanetary date/time system been established yet?
6
How much accuracy is required to achieve interplanetary orbit without adjustment or deceleration?
9
Why not leave interplanetary probes on standby after primary mission, activating them at will decades later?
2
How does Accion System's TILE propulsion module compare to an equivalently sized Hall effect or an Ion thruster?
18
After the loss of Challenger, why weren’t Galileo and Ulysses launched by Centaurs on expendable boosters?
5
Tradeoffs sending a tank of fuel ahead of a crewed mission to another planet?