I was playing around with the math for getting a pressure-fed rocket to orbit and came across something that I haven't seen addressed anywhere.

The weird part is that (after playing around in RPA) ISP doesn't seem to decrease linearly with chamber pressure. That means that decreasing tank pressure (and thus chamber pressure) decreases ISP but actually INCREASES delta-V because the mass fraction improves at a faster rate than ISP falls off.

My first question: Is it correct that ISP does not fall off linearly with chamber pressure?

My second question: Are there other inherent factors that stop delta-V from increasing with decreasing ISP?

My third question: What factors (if any) prevent a rocket from taking advantage of this and running at extremely low chamber pressures (like 5bar)?

Follow-up question: I assume combustion instability is the limiting factor, correct? Can that be mitigated by using more, smaller nozzles?

First of all: great observation! This is indeed the reason why pressure fed rocket engines are limited in possible chamber pressure, the added weight from the tanks isn't worth it at a certain point. Which is why we have pump fed rocket engines.

Some equations from Ideal Rocket Theory:

Now we aren't really interested in any of the other parameters, we just want to know what happens if we change the chamber pressure, $p_C$. So we make all the stuff before the brackets 1 constant, let's call it $a$. (Important to note is that the chamber temperature $T_C$ is thus assumed constant, while it actually depends on $p_C$, but let's ignore that for simplicity as well. $\gamma$ and $R$ aren't dependent on $p_C$ for an ideal gas)

Furthermore we fill in some typical values for the ratio of specific heats $\gamma$ and the exit pressure, $p_e$.Let's say $1.2$ and $10^5\ Pa$ (approximately 1 atmosphere) respectively. You then get:

As you can see from the graph above, the exhaust velocity drops faster and faster if you decrease the chamber pressure, so at a certain point the opposite of your observation will be true: loss of pressure will not be worth the decrease in $I_{sp}$ relative to the savings in weight.

I think should be answered by the previous two: There is an optimal pressure for the design of a pressure fed engine. A lower pressure will mean a bigger decrease in $\Delta V$ due to less specific impulse than an increase in $\Delta V$ due to weight savings. A higher pressure than this optimum will be the opposite: less gain in DV due to increased specific impulse than loss due to increased weight.

Just as an extra: a graph that shows some rockets plotted by their tank volume and tank pressure. It shows that choosing between pressure or pump fed is actually largely determined by size (volume of propellant). It also shows that the lowest pressure designed pressure-fed engine had a tank pressure of about 2-3 MPa, so 20-30 bar. Even accounting for feed line and injector losses, the chamber pressure would be way higher than 5 bar. (It uses data from 1975 though, so there might be newer engines with lower operating pressures) 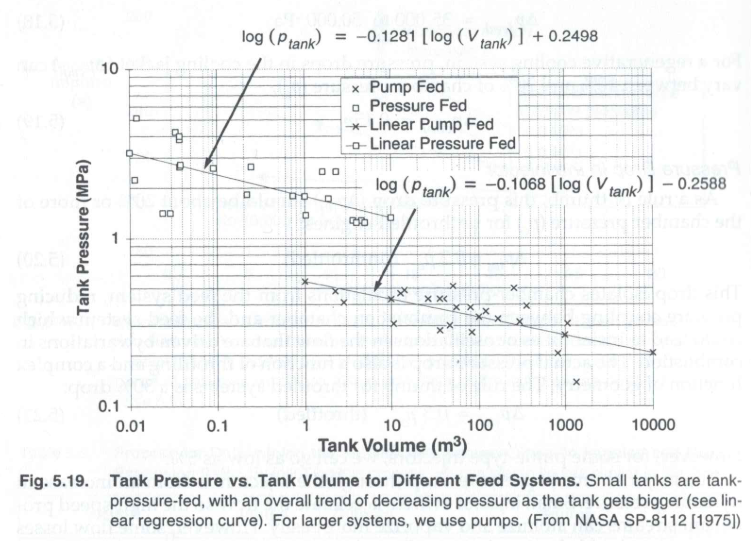 Graph taken from Humble's Space Propulsion Analysis and Design (1995). The 1975 NASA report it references only has the data, not the graph.

15
Why do pump and pressure fed liquid engines need to operate at high pressures?
5
How do pressure fed and pump fed systems compare at different scale of rockets
2
Pressure levels inside rocket liquid oxygen tanks?
4
Calculating the propellant needed for a trip from LEO to Low Mars Orbit at constant acceleration of 1g
2
Can propellant tanks in a pressure-feed rocket be pressurized by burning the propellant inside those same tanks? Recipe for Ka-BOOM?