How did three 1.2 meter spheres and a Xe+ plasma contactor keep the Shuttle "grounded"? What did they look like?

This answer to Highest DC voltage ever intentionally produced in space? mentions particle beam experiments done from the Space Shuttle while it flew through Earth's atmosphere at an altitude of 990,000 feet in a region that was substantially ionized. In fact it was in the ionosphere and we can also call this area of Earth's atmosphere space.

Since this Shuttle-based experiment was exploring the nature of Earth's atmosphere, we can also say it was studying atmospheric effects... in space. We can even say that this effort was space exploration.

Thus, this question self-demonstrates that it is on-topic here, because it is relevant to space exploration.

This answer sent me searching for "SEPAC" and I found a copy of Space Experiments with Particle Accelerators (SEPAC) and the button labeled Deepblue.Lib.Umich.Edu provides an open access downloadable copy of the paper.

The Space Experiments with Particle Accelerators (SEPAC) were conducted as part of the ATLAS 1 Speeelab mission from March 24 through April 2, 1992. One of the objectives was to perform artificial aurora experiments from orbit using high-power electron beams and the optical imaging capability of the Atmospheric Emissions Photometric Imaging (AEPI) instrument/1/. The SEPAC electron beam accelerator (EBA) is capable of injecting electrons with beam energies up to 6.25 keY. At this energy the perveance-limited electron gun can emit beam currents of up to 1.21 A. The previous flight of SEPAC on Spacelab 1/2/ showed that at these levels special means of neutralizing the Shuttle are necessary; therefore, for ATLAS 1 the SEPAC instrument complement included three 122-cm diameter conductive spheres for charge collection and a 1.6 A hollow-cathode Xe+ plasma contactor. The flight data show that the effectiveness of these charge neutralization devices was sufficient for injection of electron beams up to the highest beam currents available with the SEPAC EBA. Another objective of SEPAC was to conduct neutral xenon releases from the plasma contactor (PC) to test the predictions of the critical ionization velocity theory.

An excellent summary of the mission can be found here: https://earth.esa.int/web/eoportal/satellite-missions/a/atlas

SEPAC involves the firing of a 1.6 Å 7.5 kV electron beam accelerator from the Shuttle bay to study a variety of phenomena related to vehicle charging and charge neutralization, atmospheric interactions, and virtual-antenna operation. The Plasma Contactor Neutralizer System consists of a 25 cm diameter xenon plasma source, neutral gas source, xenon-storage and control unit, and power supply. The flight plasma source produces 1.5 Å of xenon ion current with an input power of about 210 W and a xenon gas flow of about 2.2 standard liter/h. The neutral gas source is sized to release $10^{23}$ atoms of xenon in 100 ms pulses.

Particularly visible on the ATLAS-1 pallets were the black spheres of the Space Experiments with Particle Accelerators (SEPAC), designed by Japan’s Institute of Space and Astronautical Science, based in Tokyo. It comprised an ‘electron gun’ to investigate the charged-particle dynamics of the ionosphere and during the mission was used to emit a stream of xenon plasma to ‘clamp’ the electrical potential of the Shuttle to the plasma potential of the upper atmosphere, as part of efforts to gain a clearer understanding of aurorae, the nature of the planet’s magnetic and electric fields and the effects on the orbiter itself.

The details of the neutralisation I was finally able to track down here: https://arc.aiaa.org/doi/10.2514/6.1978-661. I don't have access to the full paper, but the first page contains the most relevant information:

When an electron beam is injected into the ionosphere from EBA, a positive charge builds up on the Shuttle to which the EBA is grounded. The capacitance of the Space Shuttle is a few hundreds of picofarads. Supposing an electric charge of 1 C (1 A x 1 s) is removed from the Shuttle to infinity, a positive potential of $10^9$ V appears on the Space Shuttle. If the initial beam energy is not high enough, the electron beam is attracted back to the spacecraft within a period much shorter than 1 s. In order to maintain steady beam ejection, the return current must be supplied from the ambient plasma. Since the amount of the return current depends on the turbulent plasma conductivity, the charge neutralization is an important problem of plasma physics and, at the same time, it is one of the major SEPAC objectives. A similar charging problem has occurred with satellites, and arcing phenomena have been studied. Further studies are under way on the SCATHA (Spacecraft Charging at High Altitude) satellite launched in Jan. 1979. Although the polarity of satellite charging is contrary to that of the beam ejection experiment, they share the underlying physics. The general guidelines for the establishment of charge neutralization are: 1) the emitting current is balanced by the return current, and no charge accumulation is promoted; 2) the potential distribution of the spacecraft and its surrounding is uniform with no strong electric field; and 3) the spacecraft potential with respect to that of space plasma is sufficiently low. The second condition is necessary to prevent surface arcing and sputtering. The third is the condition for the absence of the bombardment of the particles accelerated over long distance.

Finally this paper: Electron Beam Experiment in Space has this to say:

The vehicle charging was measured by using a floating probe and a Faraday cup. Generally, the vehicle potential increases as the beam current is increased as naturally expected. The charging is strongly dependent on the shuttle configuration with respect to the ambient plasma. When the shuttle is in the wake, that is, the engine bell housing which is supposed to have the largest conductive area is in the wake, the shuttle potential goes up completely to the beam energy for the beam current above 100mA (Fig. 2). Due to the charge-up effect, the surface of the shuttle is strongly illuminated by electrons accelerated by the charge-up potential (Fig. 3). On the other hand, it is quite natural that when the engine bell is not in the wake, no high charge-up phenomena are observed. In order to study the neutralization of charging by a plasma ejection, MPD arcjet plasma was produced during the electron beam firing. As shown in Fig. 4, the floating probe signal dropped to zero when the MPD arcjet plasma was fired. It did not last long, because the plasma was ejected in pulse and expanded around the shuttle very rapidly but it shows that the MPD arcjet plasma really works as a charge neutralizer for the beam emission. 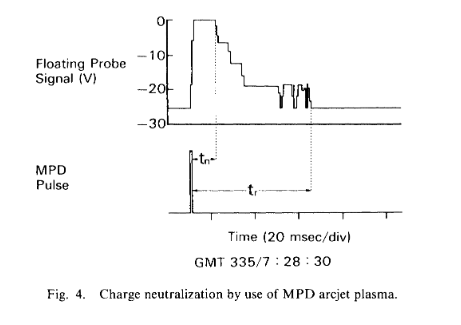 STS-45 payload bay (PLB) configuration onboard Atlantis, Orbiter Vehicle (OV) 104, includes the Shuttle Solar Backscatter Ultraviolet 4 (SSBUV-4) and Atmospheric Laboratory for Applications and Science 1 (ATLAS-1) instruments. The SSBUV get away special (GAS) canisters are mounted on a GAS adapter beam on the starboard PLB sill longeron. THE SSBUV support canister is in the foreground and the SSBUV instrument canister with motorized door assembly (MDA) is next to it. ATLAS-1 equipment includes the igloo (center - decorated with several insignias), the Space Experiments with Particle Accelerators (SEPAC) spheres, and additional instruments mounted on unpressurized spacelab pallets. In the background, are the orbital maneuvering system (OMS) pods and vertical tail highlighted against the cloud-covered surface of the Earth. 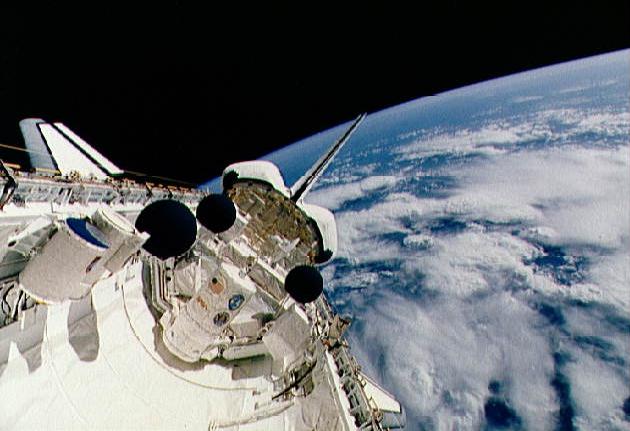 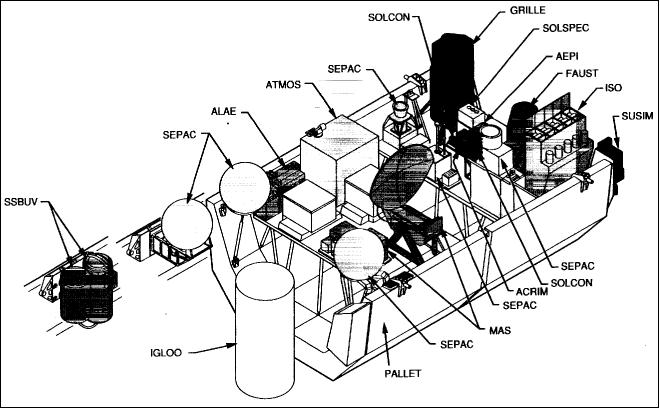 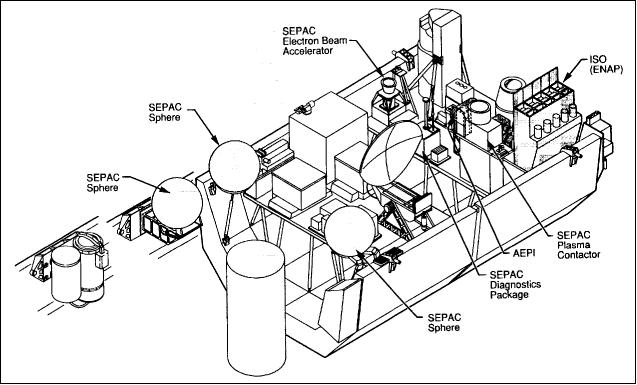 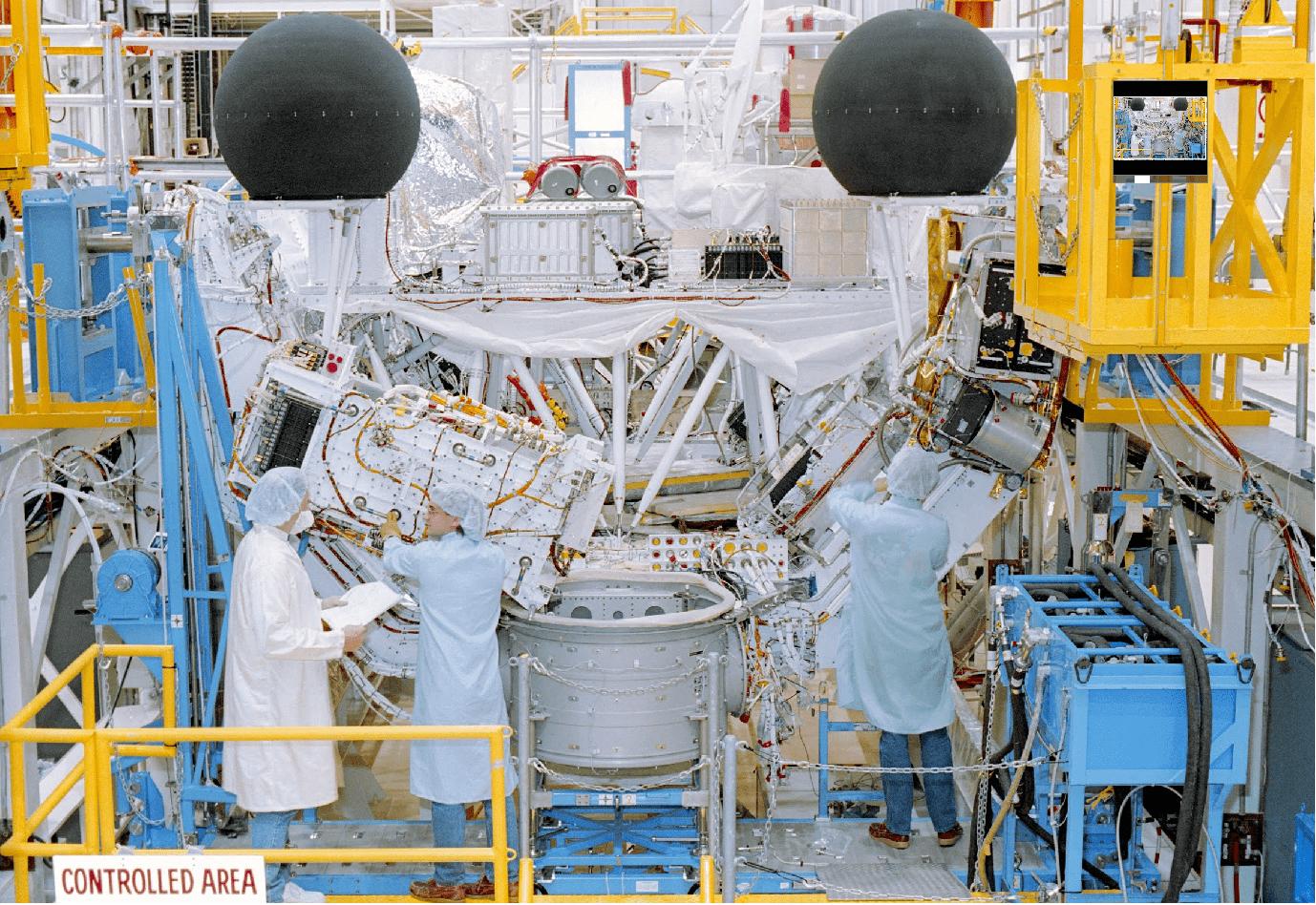 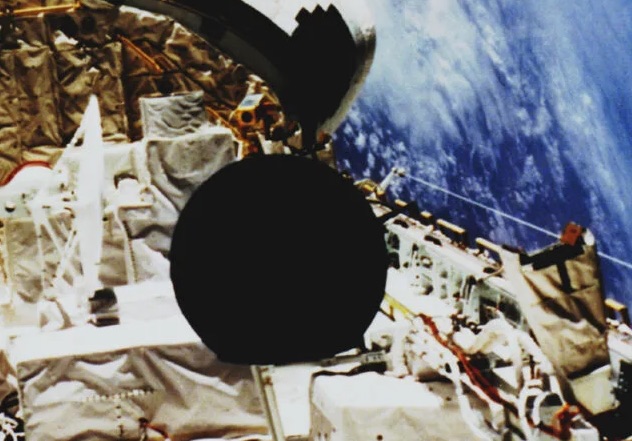 Supplementarily, I've just run across the following image in Popular Science's The silliest names scientists have given very serious telescopes The image shows in the foreground:

Back in 1992, the FAr-Ultraviolet Space Telescope rode on NASA’s Atlantis space shuttle as one of the experiments on the ATLAS-1 Spacelab. Its job was to capture wide-field images in far-ultraviolet light. FAUST won a spot on this list over the more recent FUSE (Far Ultraviolet Spectroscopic Explorer) mission, which ended in 2007, because which one would you prefer to travel through space with—a piece of string, or a scholar who’s not afraid to bargain with the devil?

But in the background of this large image can be seen the three spheres. 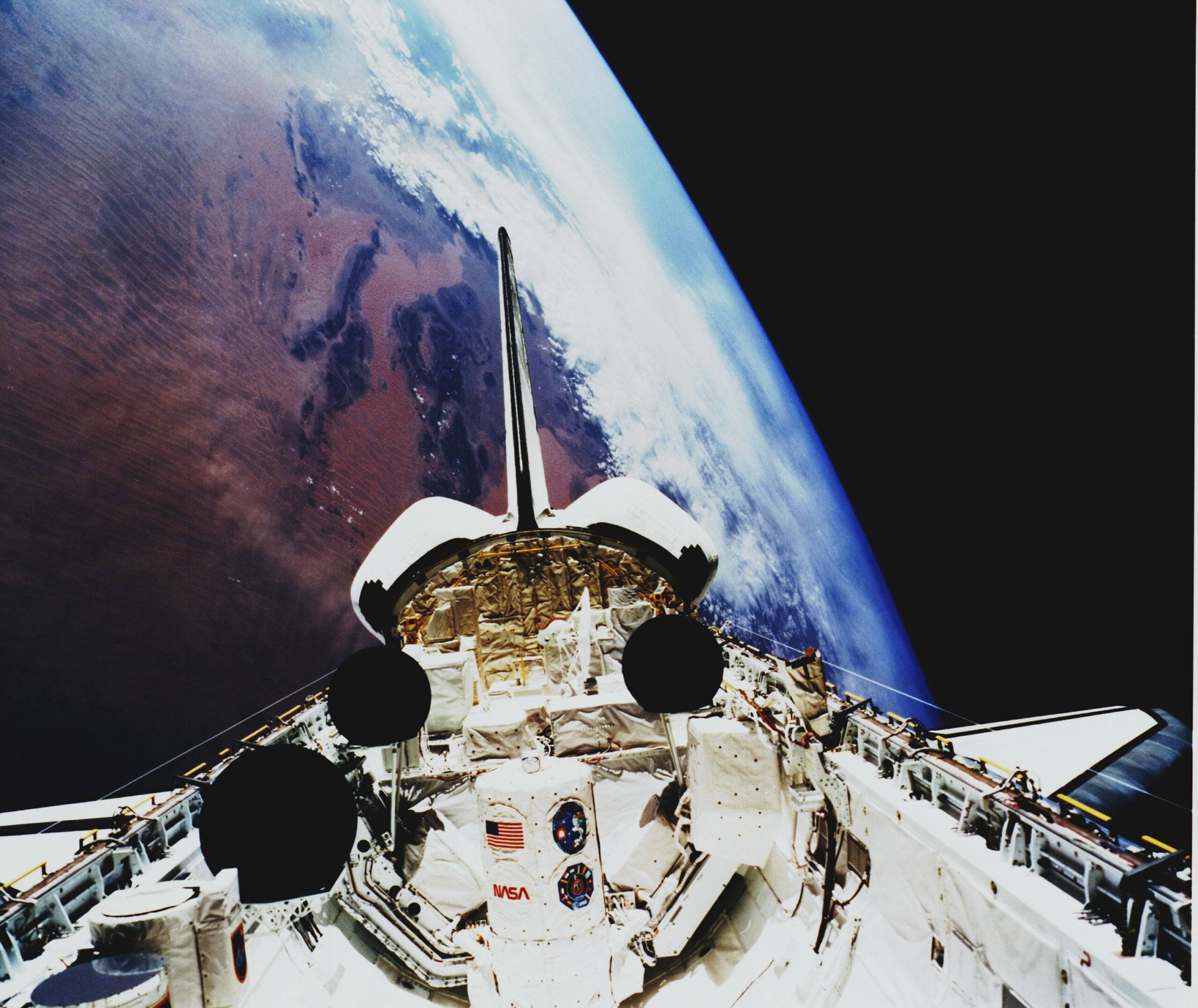 Not the answer you're looking for? Browse other questions tagged space-shuttle low-earth-orbit atmosphere plasma spacecraft-charging or ask your own question.

11
How did the Space Shuttle keep its cryogenic fuel cold?
4
What would a Venus sky look like above the cloud tops night and day?
7
What are these Space Shuttle cockpit elements and what are they for?
10
What did Karman's original "Karman line" calculations look like?
4
Did the Space Shuttle crew have to worry about the ionosphere? What relevant training or specific briefings did they receive?
0
How long did the plasma blackouts of Perseverance's signals to MRO and direct-to-Earth last during its seven minutes of terror?
1
What are, and what has been learned from making plasma crystals in space? Is a tl;dr-like answer possible?
3
What is final positioning of rideshare satellites (like transporter-2 mission) and how do they get there?
0
Why were the three 122-cm diameter conductive spheres for charge collection in the Shuttle's Space Experiments with Particle Accelerators black?