A balloon in the Venus atmosphere?

A spacecraft can enter in the atmosphere and inflate a balloon to fly for a few days or weeks. That can help collecting a lot of data.

This is a very similar question but featuring old answers

Yes and kudos to OrganicMarble's power of deductive reasoning! I am sure there have been several proposals or studies of this. Below is a 2018 report of a meeting of over 50 expert participants and it likely contains a thorough listing and summary of previous studies as well as current thinking.

Phys.org's recent The detection of phosphine in Venus' clouds is a big deal, and here's how we can find out if it really is life says the following:

But even orbital data can't tell us the whole story. To fully get a handle on what's happening at Venus, we have to actually get into the atmosphere. And that's where aerial platforms come in. Capable of operating above much of the acidic cloud layer—where the temperature and pressure are almost Earthlike—for potentially months at a time, balloons or flying wings could take detailed atmospheric composition measurements there. These craft could even carry the kinds of instruments being developed to look for life on Europa. At that point, humanity might finally be able to definitively tell if we share our Solar System with Venusian life.

A new dawn for Venus exploration?

Thirty-one years have elapsed since the United States last sent a dedicated mission to Venus. That could soon change as NASA considers two of four missions in the late 2020s targeting Venus. One, called VERITAS, would carry a powerful radar to peer through the thick clouds and return unprecedented high-resolution images of the surface. The other, DAVINCI+, would plunge through the atmosphere, sampling the air as it descended, perhaps even able to sniff any phosphine present. NASA plans to pick at least one mission in April 2021.

Clicking the 1st link, we see 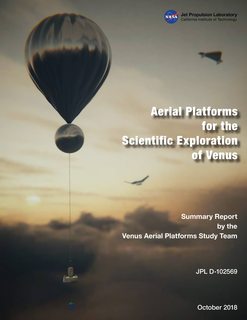 In 1985, two balloons were inserted into the atmosphere as elements of the Venus-Halley (VeGa) mission, the last mission to Venus conducted by the Soviet Union. In two Earth days, each balloon travelled approximately 11,500 km in the superrotating winds at an altitude of about 54 km, tracked by a global array of twenty radio observatories. Observations by instruments on the balloons and from radio tracking of their motion provided unique information on the circulation of the Venus atmosphere.

Now, almost 35 years later, the time is ripe to resume the exploration of Venus by once again deploying aerial platforms that can investigate the Venus environment in situ, yet avoid the extreme temperatures of the surface. Aerial platforms much more capable than the VeGa balloons can now be designed to be equipped not only to investigate the structure of the atmosphere and its circulation, but also to determine the chemical nature of the gaseous atmosphere and the Venus clouds. A platform high can also be used to investigate the surface and interior in a way that is neither possible from orbit, nor from short duration landed missions feasible with current technology.

The Venus Aerial Platforms study involved 52 participants with expertise in Venus science, planetary mission engineering, and aerial platform technology. A process developed by the Keck Institute for Space Studies (KISS) was used to perform the study, which was conducted at the KISS conference facilities at Caltech. A range of possible Venus aerial platform concepts were considered and evaluated with a methodology which included the merits of the science that could be performed, the size and complexity of the platform, and the maturity of the technology...

The Soviet Union actually deployed balloons on Venus, so I assume they studied them before that.

Yes. Here's a recent proposal, Calypso, which involves a balloon in the high atmosphere lowering a probe beneath the cloud layer. The probe would be drawn up to cool off when it starts to overheat: https://www.space.com/venus-calypso-surface-survey-idea.html

Not the answer you're looking for? Browse other questions tagged probe venus balloons or ask your own question.

31
When will we send floating probes to Venus?
6
Why is there no plan for a Venus orbiter by ESA or NASA?

12
Around Venus in 8 days by Balloon?
8
What stage of development are meteorology models of Venus?
11
How could the proposed floating base in the atmosphere of Venus receive supplies?
31
When will we send floating probes to Venus?
4
What is the atmospheric composition of Venus at the 34 mile (50 km) altitude of the proposed HAVOC program?