Challenger Shuttle: could the crew have survived?

Some sources point out that the shuttle cabin stayed intact following the solid rocket booster explosion, and that in fact, it is likely the crew died upon the cabin impact into the ocean. 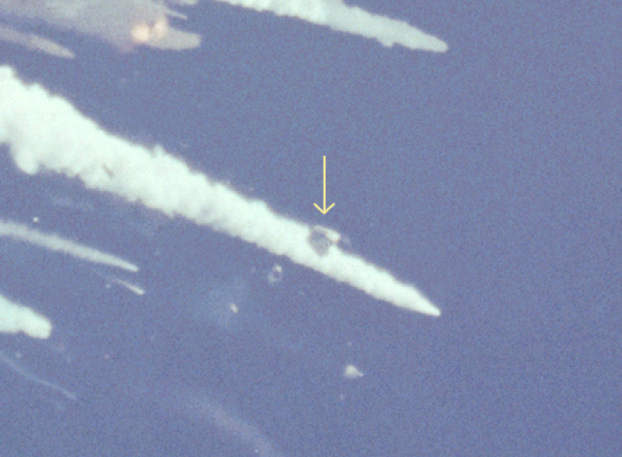 The space shuttle was probably not designed for such scenario, but could the crew have survived if the cabin was equipped with parachutes, just like the cabins used for moon landings from the Apollo era? (To be clear: I mean parachutes attached to the cabin, not for crew members!)

The fact that the cabin part of the shuttle stayed intact at least demonstrates that the shuttle was designed in such a way that upon some catastrophic scenario, the very cabin of the shuttle was durable enough to "break off intact". The shape of the cabin (visible in the footage immediately following the explosion) does seem (at least remotely) similar to the shape of the moon-landing Apollo-era cabins. So in hindsight, I am thinking that it could have been designed as a "last resort survival cabin", should the shuttle catastrophically fail, and could have been equipped with parachutes, so that the cabin could descend on parachutes into the ocean?

One of the major errors in the Space Transportation System (STS) design was the lack of a crew escape system usable from launch to landing.

Escape systems are costly, take up mass allowance that can be used for payload, and can cause problems on their own. The STS designers had an idée fixe that STS would be an "airliner to space" and would operate with airliner levels of safety. They concluded no escape system would be required due to what they considered a completely safe design.

After the failure of STS-51L which destroyed the Challenger Orbiter and killed its crew, the rationale for not including such an escape system was heavily scrutinized by the press, public, and government. Studies were done regarding retrofitting escape systems into the existing Orbiter. Much of this work is mentioned in the NASA report IMPLEMENTATION OF THE PRESIDENTIAL COMMISSION RECOMMENDATIONS which summarized the work done after the STS-51L failure to return the STS to flight operations.

Note that the Rogers Commission recommendation re: escape was only...

Make all efforts to provide a crew escape system for use during controlled gliding flight.

...which was a 'softball'. However, a recommendation to provide a launch to landing escape system would have shut down the program, which at the time was supposed to be the sole US launcher of payloads...

The study, completed in September 1986, considered ejection seats, tractor rocket extraction of seated crew members, bottom bail-out, and tractor rocket extraction through the side hatch. Each option considered the crew size, the required orbiter modifications, and the implementation schedule. These options are summarized in the following paragraphs.

Another extraction concept investigated was a tractor rocket system that would extract up to six seated crew members. Once activated, this system would jettison the tops of the crew module and forward fuselage and extract the crew using tractor rockets. This concept would require modification of the crew module and forward fuselage structure, the flight deck floor, and overhead consoles, and would affect payload station usage. The earliest availability of this modification is mid-1990. This configuration is no longer being pursued because of late availability, vehicle modification requirements, and crew size limitations.

A bottom bail-out concept that would provide safe egress for up to eight crew members was also assessed. In this concept, a panel would be opened on the bottom of the orbiter to deploy a guide chute, permitting the astronauts to exit the orbiter through the chute. This concept would require extensive structural modifications, including installation of a deployable panel and pyrotechnic devices to open the panel, design and installation of the chute, and relocation of some subsystem components. Modifications could potentially be completed and certified by 1989, but the concept is not being considered because of the highly complex vehicle changes required.

The final concept evaluated was escape through the side hatch using tractor rockets to propel the astronauts out of the orbiter. This method, which could safely extract up to eight astronauts, would require early venting of the crew module to equalize the crew module internal pressure with the external pressure. After venting is completed, the side hatch would be jettisoned. The crew members would then exit sequentially by using the tractor rockets. Required orbiter changes include addition of a cabin vent capability, modification of the side hatch structure to allow for hatch jettison, addition of pyrotechnic devices to jettison the hatch, and installation of the tractor rocket system.

I personally remember proposals to incorporate an escape capsule containing the entire crew compartment; this is not mentioned in the report although this newspaper story alludes to them.. Also note that the proposals mentioned would likely be ineffective for ascent.

Similar systems certainly exist but not at this scale

Some spherical cow approximations - a parachute for a 70kg human weighs 14kg, giving 0.2kg of parachute per kg of payload.

The dry mass of the shuttle was around 165000kg, take 1/4 of that for mass of the crew section minus wings and fuselage for 41250kg gives a very approximate parachute weight of 8,250kg or 8 tonnes.

The space shuttle payload is around 29 tonnes, so there would be some left but this system would be using somewhere between one third and one quarter of the shuttle capacity, and only work if the shuttle suffers an inflight break up in an environment where the parachute helps.

And an incorrect activation of this system at pretty much any point in a normal flight will be quickly lethal, so this is a safety system that adds little and brings exciting failure modes. Designing the system to separate the crew cabin in flight and operate as a crew escape system allows it to perform over a wider range of conditions (deliberately disintegrate the orbiter) but this further increases the mass and adds more really exciting failure modes if say one destruction charge randomly fires.

I suspect if the astronauts had been offered 1/4 of the payload capacity for improved safety they would have happily used it, but probably in a different way to trying to recover the entire cabin. Moose comes to mind as a starting point.

One consequence of eating payload capacity is that more flights might be flown - if only 2/3 of our timeline payload capacity is available 50% more flights are required which means very approximately the program would have seen three major mishaps. If the safety improvement from the payload reduction does not save at least one of the crews then it actually makes things more dangerous over the life of the program.

Designing for safe spaceflight is a hard problem.

18
In a shuttle launch, what would have happened if all three SSMEs failed during flight?
4
Why aren't ejectable engine blocks in use today?

34
How could a 90 m/s delta-v be enough to commit the space shuttle to landing?
8
Were ejection seats on the Space Shuttle a practical safety system?
14
Was a method available to save the Challenger Crew?
13
How was the Space Shuttle Orbiter used for ISS Reboost?
1
Is a low-altitude, stable glide really absolutely needed to bail out of the space shuttle?
3
Was it possible to simulate another atmosphere during Shuttle training?
14
Did the U.S. Space Shuttles have a way for crew to bail out?
2
Riding out an exploding rocket