If you imagine two satellites orbiting earth, each in a circular orbit in the same plane and at the same altitude, but varying in their angular position, the simplest way in my mind to travel from a rendezvous with satellite A to a rendezvous with satellite B is to either speed up or slow down such that after one orbital period, you arrive back at the same altitude, but at the angular position of the target. I believe this is also the most dV efficient method, but please let me know if I'm mistaken.

However, if you instead imagine traveling between, say, jupiter and an artificial satellite 5 degrees ahead of jupiter in the same orbit, this method would work but take something like 12 years despite the fact that the separation is not that great.

My question is what other options exist in this case. Surely you could accelerate greatly and just travel in a roughly straight line to the target, but this would be outrageously expensive. It seems to me that there must be a set of maneuvers that minimize both time and dV requirements given some arbitrary valuation for each (e.g. 1 year = 10pts, 1000m/s = 40pts, find maneuvers that minimize total score).

I made an image that shows one kind of phasing maneuver I'm aware of that takes less than one period and works (at least for small phase changes). 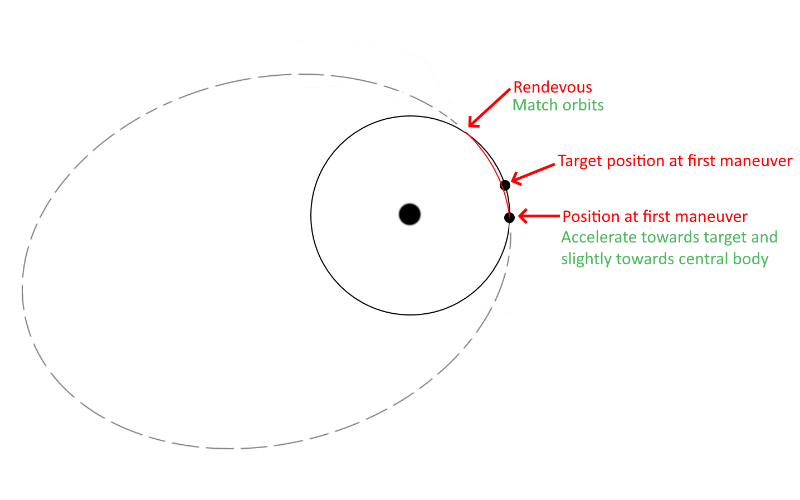 This is a three-variable solution space, with phase angle, delta-v and transfer time as its axis.

To keep things simple, I'm assuming a two circular orbits with equal radius. These have unit radius, unit velocity. Scale to your actual use case.

Ahead in the orbit is the positive direction of the phasing angle.

These rely on the neat fact that if you do some impulsive manoeuvre, you will eventually reach the exact same location again, and will be able to "undo" the manoeuvre to get back the original orbit. Phasing using this method relies on the intermediate orbit having a different orbital period.

As the rendezvous point is fixed, the transfer time is quantised, and is on the form:

Where $n$ is a whole number and $\theta$ is the phasing angle. 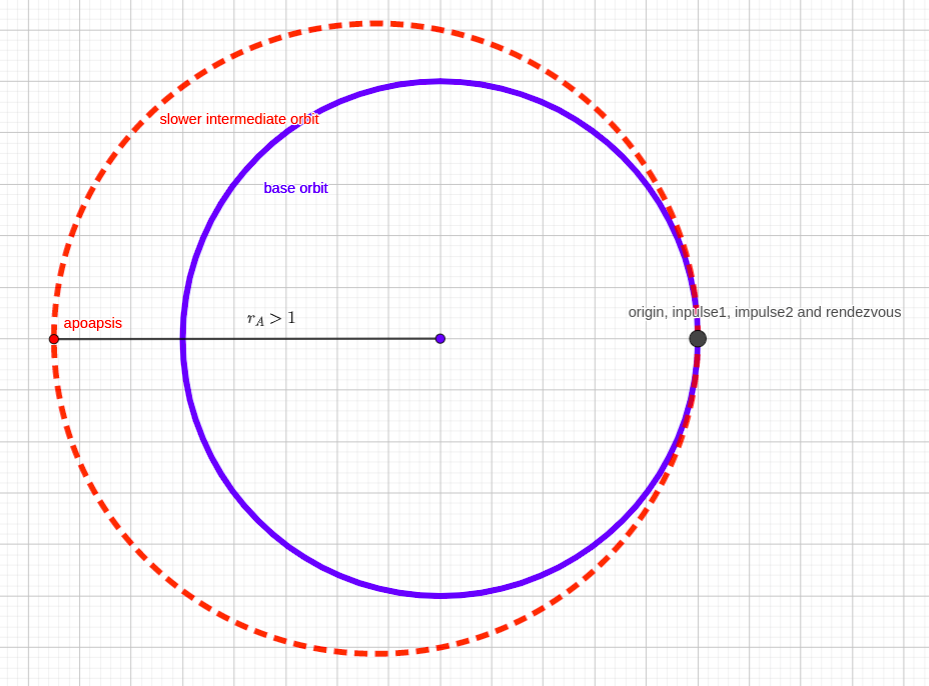 This helps increase the phasing angle. Useful when it's already close to $2\pi$, and you want it to roll around to 0. That is, a "trailing" target.

We will be in the transfer orbit for $\lfloor{t\rfloor}$ orbits, meaning the orbital period of it is $\frac{t}{\lfloor{t\rfloor}}$. Clearly, this approaches 1 when $t$ is very large.

Orbital period is calculated from the semi-major axis by $2\pi\sqrt{a^3}$, so from that we can find the needed apoapsis height:

From the vis-viva equation, the total delta-v is:

The worst case scenario for this is when the target is slightly leading, and one tries to reach it as fast as possible by changing into a transfer orbit with an orbital period close to 2.

That would however be a very misguided use of resources, since the following method should have been used instead in this case: 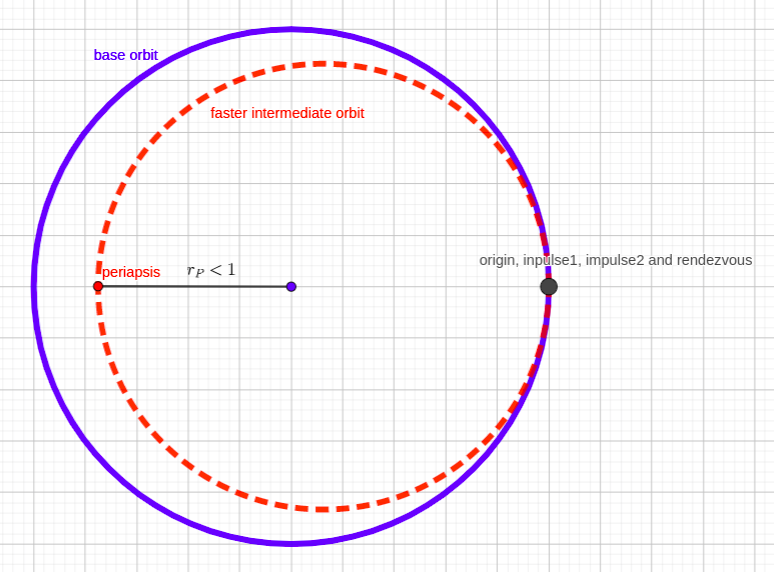 This helps reducing the phasing angle. Useful when it's already low, that is, a "leading" target.

Additionally, there's often the constraint that some lower limit exists for the periapsis, since there's often a planet in the way. These two complications makes analysis slightly more difficult.

Nevertheless, one may still use a similar strategy as in the case with the increased orbital period, this time lowering the periapsis into an elliptical transfer orbit. The orbital period is now $\frac{t}{\lceil{t\rceil}}$. Unlike the previous strategy, $n$ is not required to be 2 or greater, but as an additional constraint, the orbital period is not allowed to be lower than $\frac{1}{2\sqrt{2}}$.

You should generally check the delta-v for both the increased and reduced orbital period strategies, as they have different costs but similar transfer times (except in the $n = 1$ case where only the reduced period solution may exist). The best choice depends on the phasing angle. 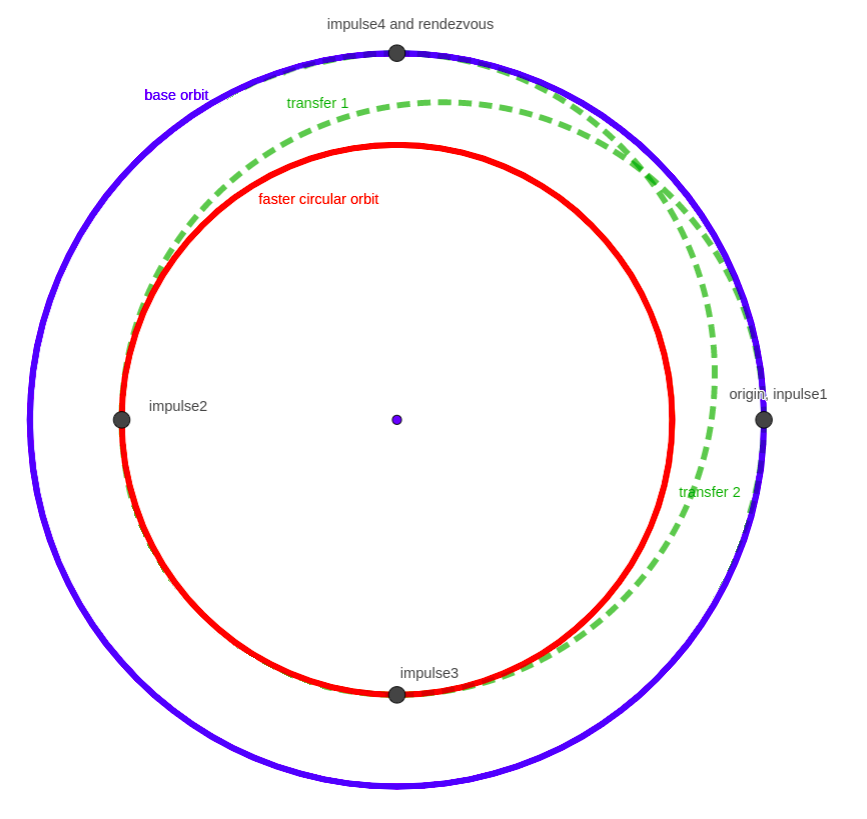 The most efficient way of reducing orbital period is to first lower the periapsis, and then circularise. In other words, a Hohmann transfer (bi-elliptic transfers are not useful for this particular problem).

This increases the manoeuvre from two impulses to four:

Unlike the two previous strategies, transfer time is not quantised, since the transfer back into the original orbit can be done at an arbitrary phase angle, because the intermediate orbit is circular.

Transfer time is a bit more involved. The phase angle is reduced both in the two Hohmann transfer legs, and during the time spent in the lower circular orbit:

At very cheap, long transfer time uses of this (that is, the time spent in the inner circular orbit is much higher than the Hohmann transfers), the equations can be simplified:

Meeting up at a different location 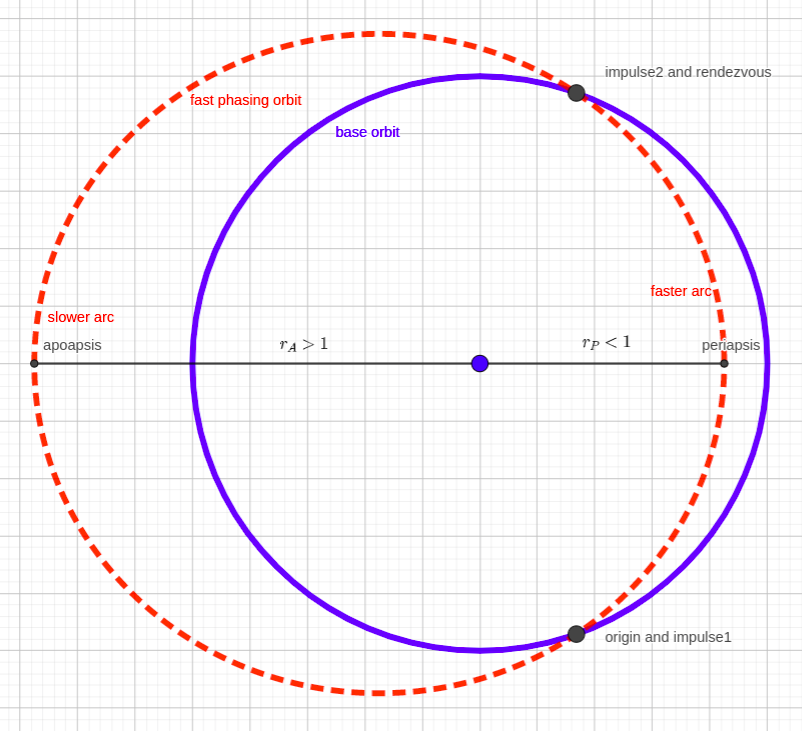 (also quite an important TODO for fast phasing at reasonable cost. It's what's illustrated in the image in your question)

The transfer time is not straight forward, and I don't quite have the equations for picking an optimal $r_P$ and $r_A$ at your delta-v budget.

The cost is however given by:

A class of such trajectories, nadir catch-up burns.

These are the direct phasing manoeuvres that meet up on the exact oppsite side of the orbit. These are easy to calculate, hence why they are included here before completing this section. 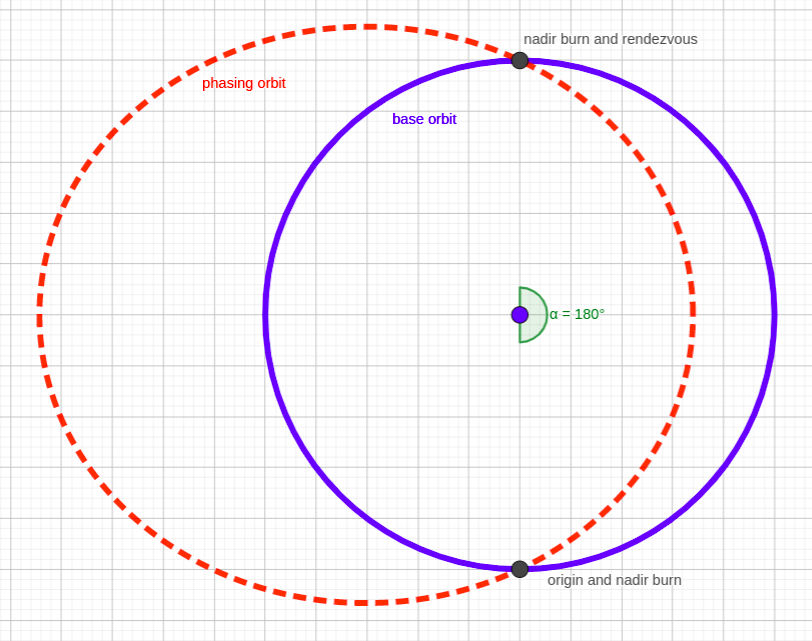 The transfer time in the fast arc is then:

From which we can find the phase angle:

In the extreme case, where available acceleration is arbitrarily high and delta-v is much higher than the orbital velocity, the problem approaches a simple relationship to distance:

Certain spacecraft, such as those propelled by ion engines, have very limited thrust. They can therefore not perform impulsive burns, and instead follow constant thrust spirals.

In such low-thrust spirals, the spacecraft is always in an approximately circular orbit. The delta-v cost between two such circular orbits is remarkably simple:

That is, simply the difference between the orbital velocities.

A low-thrust spacecraft would spiral up (or down) until half the phasing angle has been reached, and then return in a similar spiral transfer to cover the other half.

The relationship between transfer time and phasing angle is here highly non-linear. The change in phasing angle at any instant is $\theta' = \omega - 1$, where $\omega$ is the current angular velocity, which itself is given by $\omega = \frac{v}{r}$, where $v$ and $r$ is the current velocity and orbital radius.

Integrating over time is then:

Where $a$ is acceleration. With the base orbit as the origin, it yields the result:

(positive $a$ is here spiralling outwards) 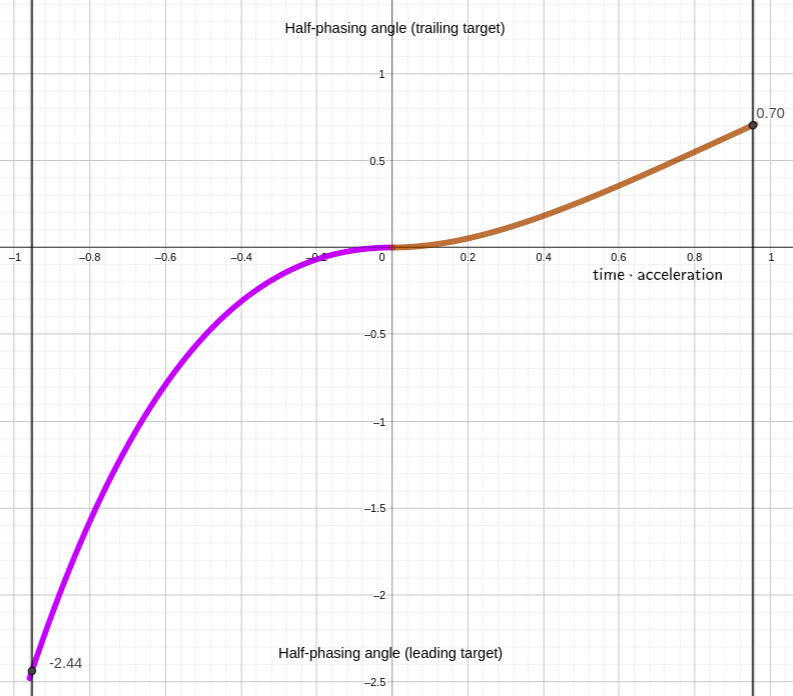 I have never computed the energy efficiency but my experience with Kerbal Space Program is that for catching stuff in basically your orbit but a bit ahead of you by far the easiest answer is to burn towards the planet. Likewise, for something a bit behind you burn away from the planet. In both cases you will make a matching burn half an orbit later. Note that the required burns go up rapidly as the angular distance goes up, the relationship is very non-linear but I do not know the formula.

Otherwise, you'll have to use a staging orbit.

10
Are ion thruster trajectories classified as brachistochrones?
5
How to create a satellite intersection/conjunction in GMAT?
6
Brachistochrone variation for Earth-to-Mars Orbit
5
References for constant low-thrust spiral up-coast-spiral down phasing maneuvers for circular and non-circular orbits?

10
At which point would two GSO/GEO satellites with similar orbital elements be closest to each other?
14
Orbital mechanics: trying to understand counterintuitive behavior (braking to overtake)
15
Do we sufficiently understand mechanics of Lagrange point stationkeeping for EML2 rendezvous and assembly?
30
Why is geosynchronous orbit an altitude, rather than a velocity?
10
Clohessy-Wiltshire/Hill's Equations - F=ma?
11
If you throw a baseball from the space station, will it return to you in 90 minutes?
5
References for constant low-thrust spiral up-coast-spiral down phasing maneuvers for circular and non-circular orbits?
3
Why end-of-life GPS satellites given orbits that seemingly still intersect active satellite orbits but with a different period? Recipe for disaster?