I recently saw a program by Prof. Brian Cox (Human Universe Ep.1) where he mentioned that just by using two equations - f=ma and the universal law of gravitation, you could calculate how much a spacecraft would have to slow down by to enter a spiral decent for a reentry. With orbital velocity known, he stated that the astronauts would need to slow down by 128 m/s and gravity would do the rest.

I've tried to figure how this could be, if there is anything more than just employing two formulae.

It's true that you could calculate how much a spacecraft would have to slow down by to enter a spiral decent for a reentry from frist principles.

A "spiral" descent isn't an effect of gravity alone (things don't orbit in spirals), but an rather an effect of atmospheric drag. 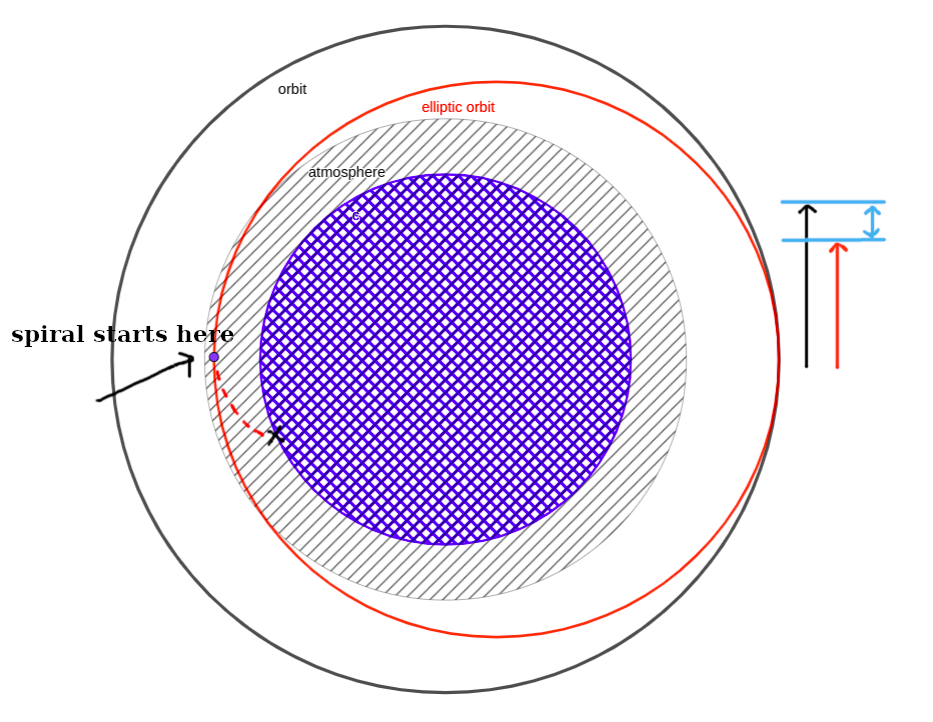 All that is needed for this calculation is the following formula:

You can see the entire 12-step derivation of this equation at Wikipedia, the vis-viva equation It uses nothing but the law of gravity, conservation of energy and momentum, and geometry. That's exactly as close to the metal as what Brian Cox claims.

Using it is very simple. See that part to the right in the diagram where the black (original) orbit and red (desired) orbit touch each other? We only need the difference in velocity at that point.

The vis-viva equation tells us exactly what the velocity ($v$) is at any part of an orbit, using only four numbers we already have available:

The semi-major axis is simply the average of the lowest point and highest point of the orbit.

For the first orbit, $a = r$ since it's circular. For the second orbit, $a$ is the average of $r$ and the distance between the top of the atmosphere and the centre of the Earth.

You then have two values for $v$, which you can subtract from each other to reach the same conclusion as Brian Cox.

I found currently viewable copies on YouTube and Daily Motion and transcribed a bit after about 40:00 as follows:

All you need are the two laws, written down first by Isaac Newton:

and the universal law of gravitation:

Now what you can show from those, really simply, is that for a circular orbit, which is what the International Space Station is basically in, the velocity (flying along there) is given by

The explanation goes on, but the third equation, the "Now what you can show from those, really simply, is that..." bit is a form of the vis-viva Equation

but simplified for a circular orbit where $r=a$.

The derivation of the vis-viva Equation is not short, and generally requires the conservation of energy, and the understanding that it is the sum of kinetic and potential energies:

and these are reduced energies the map of the object is dropped because it divides out.

Using integration we can get

by integration and paying attention to signs.

But I don't see how we can get

It's possible he was wrong.

I say that because there's another mistake on the same page! He works out the orbital velocity for the ISS to be 7358 meters per second.

Of course one can argue that Cox used a spherical cow/horse and that the ISS is closer to 1000 km than 100 km on a logarithmic axis, but I think (though I'm not sure) that he might not be right and that we need one more equation. 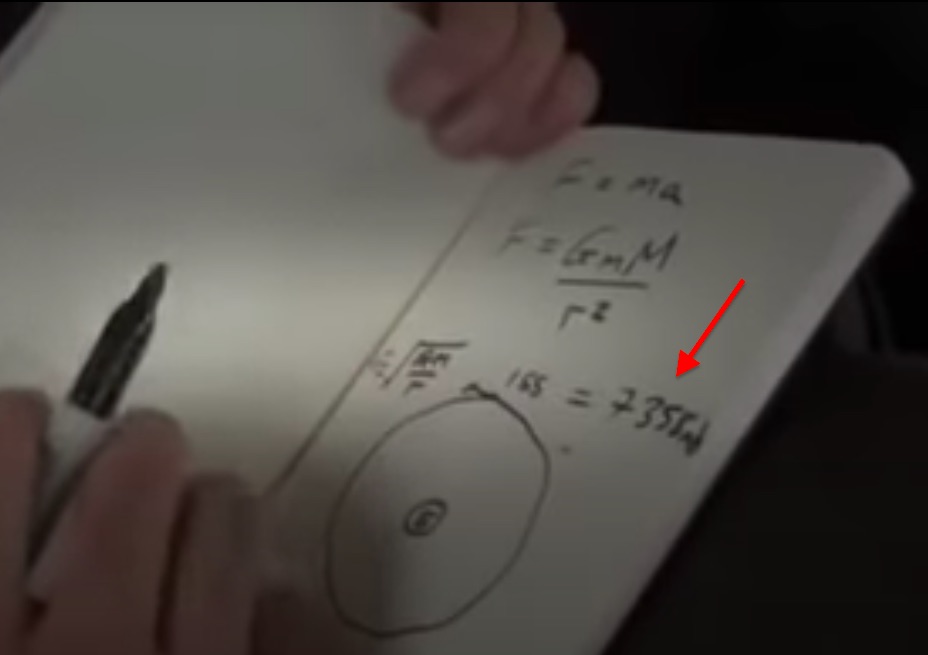 Not the answer you're looking for? Browse other questions tagged orbital-mechanics spacecraft reentry orbital or ask your own question.

31
How could a 90 m/s delta-v be enough to commit the space shuttle to landing?

18
What was Apollo 11's reentry speed at parachute deployment?
13
How is the periscope port on Soyuz spacecraft secured for the atmospheric reentry?
3
Lunar-built Spacecraft
14
Can we see the Russian Progress 59 spacecraft burn up on reentry?
8
Requirements for full destructive reentry?
18
Did the Apollo astronauts ever describe reentry deceleration?
6
How do orbital spacecraft calculate reentry?