What are the most-delayed missions that eventually launched successfully?

I author this question off of two failed cross-country trips to see NROL-44 and three lost bets on whether it'll launch. As ULA scrubs this Delta IV Heavy yet once again, I wonder, has there ever been any other rocket so delayed?

I understand that the vehicle to carry NROL-44 has been stacked for a very long time awaiting a late payload. Not only that, it's been several weeks since the scrub-after-ignition during the first launch attempt (which itself was postponed several times due to weather).

I suppose answers can offer both "longest complete rocket awaiting launch" and "longest delay between first launch attempt and actual launch". Maybe throw "most scrubs" in there, if so inclined.

Note: answers do not have to be the longest delayed rocket, runners-up are fantastic too. We celebrate space history here, even the painful parts.

NASA's ICON mission was fully stacked some time prior to June 6 2018 when the carrier aircraft took off on a ferry flight to its then planned launch site at Kwajalein Atoll only to turn around mid-flight after problems were detected in the rocket. Previous problems had already delayed it by over a year, but it's not clear when during that period it was first stacked. After additional problems with the Pegasus XL rocket it finally flew on October 11, 2019.

For shuttle at least, I believe the longest delay was the torturous launch flow of STS-35. (tl;dr it was delayed six months.)

The first official launch date for STS-35 was May 30, 1990. During tanking on that day, hydrogen leaks were detected at the orbiter / external tank (ET) interface. After a tanking test on June 6, a pad repair was deemed undoable so the stack was rolled back to the Vehicle Assembly Building (VAB) on June 13. Columbia was removed from the stack and moved back to the Orbiter Processing Facility. The umbilicals on both the orbiter and ET were changed out.

The orbiter was returned to the stack and it rolled back to the pad on August 9 for a September 1, 1990 launch date (94 days after the first attempt).

Issues with the payload then caused a slip to September 4, 1990 (98 days after the first attempt). During tanking on that day...hydrogen leaks were again detected. heavy sigh from everyone in the program. Work started in orbiter aft compartment to track down and fix leaks.

After aft compartment work was completed the next attempt was September 17, 1990 (110 days after the first attempt). During tanking on that day...hydrogen leaks were again detected. very heavy sigh from everyone in the program.

The STS-35 stack was then rolled to Pad B so Atlantis could launch on STS-381 as planned from Pad A. Then there was a tropical storm (Klaus) which forced the stack to be rolled back to the VAB yet again. Back to pad B on October 14, 1990. On October 30 a tanking test was conducted. No leaks!

The launch date was then set for December 2, 1990 (186 days after the first attempt). Tanking went well - no leaks - and after a brief range delay, it finally launched. sigh of relief from everyone in the program. 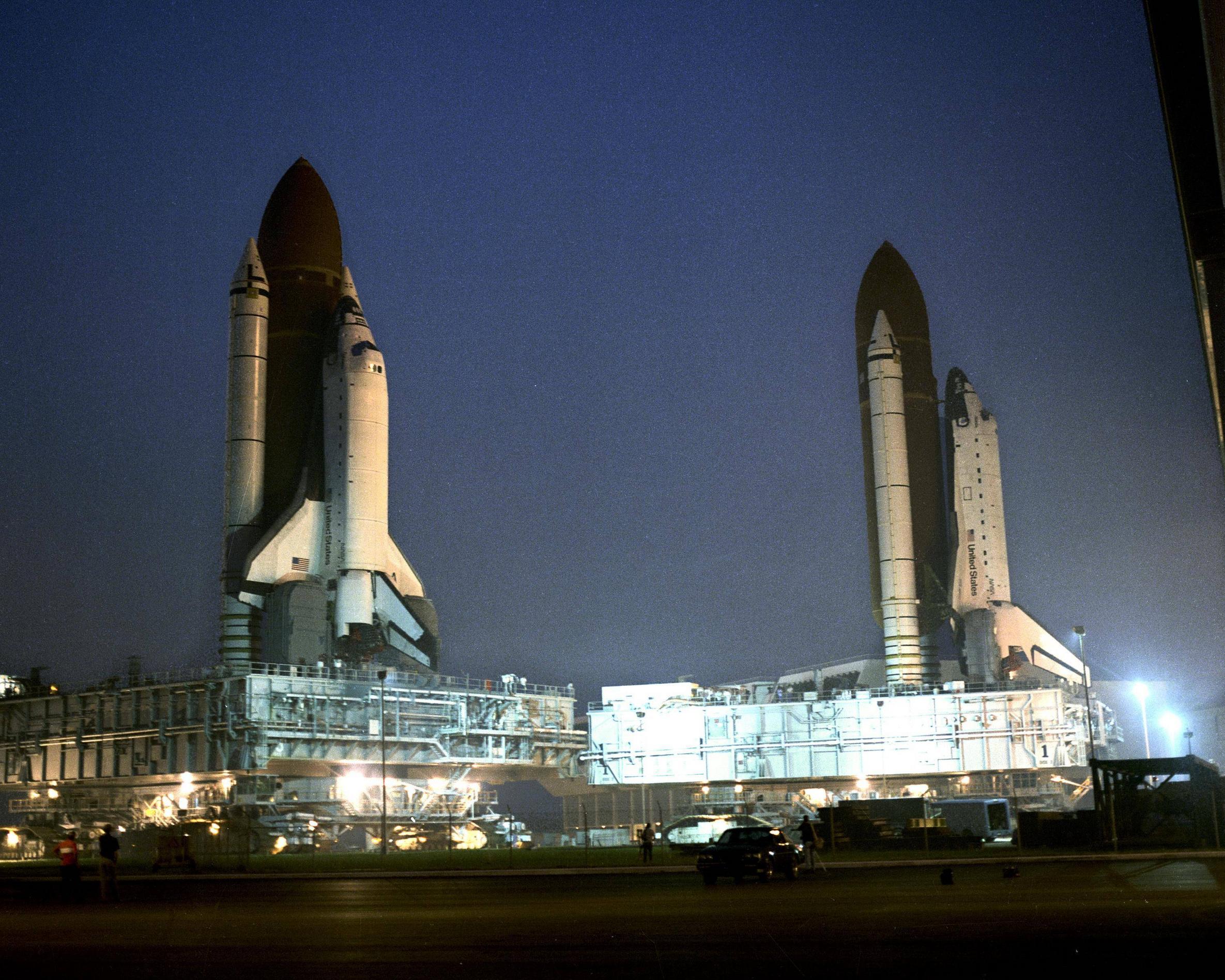 STS-35 and STS-38 passing each other to and from the VAB on the crawlerways during the "summer of leaks". Photo credit-NASA

HETE-2 was attached to its Pegasus launch vehicle in December, 1999, ready for a January launch. But then, NASA got cold feet. On January 14, 2000, they decided to postpone the launch. We had built it in an MIT lab for about 1/3 what the parametrics said it should cost, and that made some people nervous. Even though it was already well-tested, NASA demanded more testing. So, back to Massachusetts it went. No problems were discovered. We finally launched on October 9, 2000.

Not the answer you're looking for? Browse other questions tagged launch record or ask your own question.

21
How was fuel crossfeed achieved, between the main tank and the Shuttle?
6
Were all three Mobile Launch Platforms ever in use simultaneously?
8
How often were Space Shuttle launches scrubbed?

7
If a rocket launch is delayed, what happens to the cryogenics?
9
Are most Earth polar satellites launched to the South or to the North? And why?
15
How often are space launches substantially delayed by protests physically at the launch site?
25
Which has been the most gregarious rocket, launched from the most sites?
1
What company has the most satellites in orbit?
16
When was the last time that an incandescent light bulb was launched into space?