What is the name of the area on Earth which can be observed from a satellite?

The following image shows Earth and the trajectory of the ISS. A green line indicates which part of the earth can be observed from the ISS simultaneously. 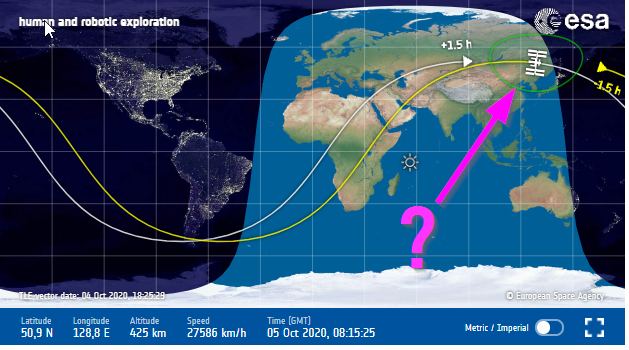 A term for the line that's perfectly usable for this purpose is "horizon".

The horizon, the line line separating the land from the sky, would be the green line in your image. Anything closer than the horizon will be visible to the spacecraft.

Note also that even though the area appears to have an irregular shape in your image, it's just distorted due to the map projection. It's otherwise circular.

Typically, the part of the earth's surface that a satellite can view at any moment is known as its footprint, a term frequently used for remote sensing satellites and communications satellites.

SE's answer about the horizon applies if the satellite is viewing the entire visible portion of the globe at once. As somebody pointed out in a comment, that would require a camera with an extremely wide-angle lens.

Your question is asking about ANY satellite, but then you go on to ask about the ISS. Different satellites have different orbits. A remote sensing satellite will probably have a polar orbit, where it covers the entire surface of the earth after a number of orbits.

Not the answer you're looking for? Browse other questions tagged low-earth-orbit terminology earth-observation or ask your own question.

14
What is the highest frequency at which Earth is, or has been, observed from space?
19
How often does the ISS orbit align with the day/night terminator?
48
What caused this bright light from the ground at night seen from the ISS?
6
Hovering Carbonite! Why do these satellite videos of Earth appear to be made from a geostationary location?
9
Can ISS astronauts see the lava from the Kilauea volcano at night?
2
Why is there no image of the Earth taken from the lunar surface during Apollo 12,15 and 16?
9
What is the extent of on-orbit refueling experience at the ISS? Which fuels? which spacecraft?
13
What is your name? What is your quest? What is the story behind Satellite 1963-38C?