This answer to Is there really microfilm on the Moon? includes a block quote which includes the following subquote:

The equipment was installed in the service module and consisted of a coherent synthetic aperature radar, the associated antennas, and an optical recorder. The radar system operated in the two RF bands of 5 megahertz (HF 1) and 15 megahertz (HF 2), or in the VHF band of 150 megahertz, and transmitted a series of swept frequency pulses. A small part of the pulse energy was reflected from the lunar surface and subsurface features and subsequently was detected by a receiver on the spacecraft. The radar video output from the receiver was recorded by the optical recorder on film, and the film cassette was retrieved during the transearth extravehicular activity.

SAR synthesizes a large aperture by capturing phase information from reflected radar signals from two different positions along a trajectory, then performing interferometry computationally after the fact, which could be anything from milliseconds to years later.

Another extreme example of a synthetic aperture (though not radar) is when radio telescopes record phase information from signals from a black hole onto hard drives, then fly boxes of hard drives to a single location for interferometry afterwards. (cf. Astronomy SE: 1, 2, 3, 4, 5, 6, 7) 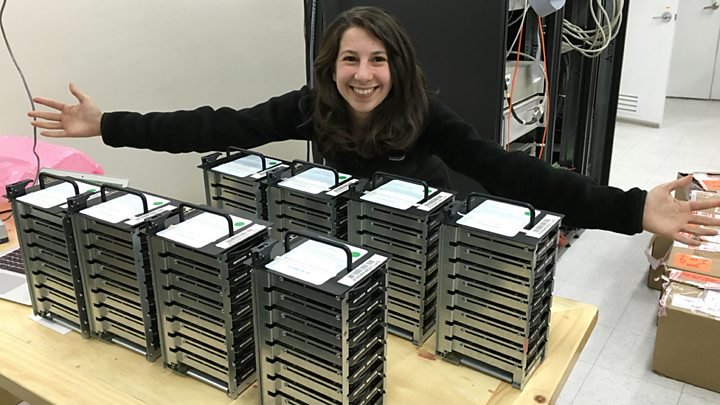 However this is Apollo 17 and the recording medium is photographic emulsion!

Question: How (the heck) was coherent synthetic aperture radar (SAR) implemented using photographic emulsion for the Apollo 17 mission? How did they record and later recover phase information and reconstruct radar topographic data using interferometry from a piece of film?

Very low frequencies of 5 , 15 and 150 MHz and 60 , 20 and 2 m wavelength were used. These low frequencies were selected to image not only the lunar surface but also the soil below down to a maximum depth of exploration of approximately 1 km.

It was not possible to use an antenna of several wavelengths size. So I guess a "synthetic aperture" was used for beam forming using two small antennas much shorter than wavelength.

The two occurencies of the word synthetic within the Apollo Program Summary Report do not explain SAR.

But in the link found by uhoh there is the missing information about optical SAR processing:

The ERIM Precision Optical Processor Facility and the techniques used to process the sounder data have been developed over the past two decades for use with synthetic-aperture radar (SAR) data. These techniques have been extensively reported in the literature [Refs. 4-8).

The coherent optical processor is an analog computer which performs linear integral trans-form operations on the data as required when processing SAR data. The sounder, as for any other SAR, requires that two independent operations be carried out with the data, one to com-press the coded (or chirp) range pulses and the other to compress the along-track synthetic aperture data records. These two independent operations reduce to a single two-dimensional operation in the orthogonal coordinate system of a coherent optical processor.

So the SAR processing was not done digital, it was done optical and analog using the record on film.

A simplified diagram of a typical SAR optical processor is presented in Figure 2. The input data film is positioned in plane P 1 and illuminated by a coherent light beam derived from a laser source. The data film is immersed in a "liquid gate" to minimize the effects of random film-thickness variations on the coherent light beam. The data, recorded on film in variable density format, modulates the light-beam intensity so that an astigmatic radar image of the lunar surface is formed; azimuth focus occurs at some plane P A' ignoring tilted plane effects, while range focus occurs at some plane PR. The pair of spherical lenses (S1, s2) operates as a unity-magnification telescope in the range dimension and transfers the range image plane to the output plane P0. The spherical, cylindrical lens pairs (S1, c1; s2, c2) operate as separate demagnifying telescopes in the azimuth dimension and demagnify the azimuth focus image as well as transferring it from P A' also, to P 0. Output film can then be used to record the image at plane P0.

The spherical lens (S1) produces a display of the two-dimensional Fourier transform of the input data in its rear focal plane P 1. Various frequency-filtering functions can be carried out in this spatial plane. Simple limiting apertures placed here act as sharp cutoff bandpass filters. Such apertures are used to eliminate both noise outside the data band and the conjugate data image which forms an out-of-focus background in the image plane; the apertures are also used to restrict the processed azimuth or Doppler bandwidth. Weighting filters may be placed in this frequency plane to reduce the range sidelobe levels. These filters are simple intensity modulation masks.

But how could they store an analog phase information on film? If the film resolves 100 lines per mm, a film speed of 50 m/s would be needed to store a 5 MHz signal.

But the FM modulated (by a chirp signal) radar pulses had a repetiton period of 2,520 microseconds, only about 400 pulses per second. So the minimal film speed was only 4 mm per second to store the 400 pulses as distinct lines.

The linear FM property of both the signal and the Doppler signature of point targets may be viewed as a linearly varying diffraction grating.

The phase information for optical analog SAR processing was delivered by this diffraction grating.

Not the answer you're looking for? Browse other questions tagged apollo-program mathematics radar apollo-17 synthetic-aperture-radar or ask your own question.

13
Detailed radar imaging of Tiangong-1; how do they do that?
8
Is there really microfilm on the Moon?
9
Star-shaped artifacts in SAR images of the "Suez Canal traffic jam seen from space"
3
How can ICEYE-X1 capture 2D high resolution SAR images in "tens of seconds"?
6
Have traditional spinning hard drives ever been used in space outside of pressurized crewed areas? Ever beyond LEO?
2
Parallel orbits around the Earth - effectively?

8
What is the current record for the farthest detection of a "dead" spacecraft?
12
Why was the 100m Green Bank dish needed together with DSN's 70m Goldstone dish to detect Chandrayaan-1 in lunar orbit?
2
Parallel orbits around the Earth - effectively?
6
How does a three-way doppler shift measurement work?
3
How can ICEYE-X1 capture 2D high resolution SAR images in "tens of seconds"?
3
What kind of camera was used to produce this Apollo-era footage of the Earth?
9
Star-shaped artifacts in SAR images of the "Suez Canal traffic jam seen from space"
3
Has "parasitic radar" ever been used in space?