Has any space probe changed course (in a large way) over time?

I encountered the following text from here:

Generally, a spacecraft is launched with huge rockets into a certain trajectory, or path, and it continues on that that path. Often the smaller rockets that are attached to the spacecraft are not large enough to change that initial push significantly. Spacecraft traveling in one direction have a hard time turning around and going in another. Sometimes a spacecraft can use the gravity of a planet or moon for an orbit or swingby and change its direction that way.

Other than that, the course is not changed in large ways, just adjusted or corrected. If a course correction is needed, the spacecraft will fire small attitude rockets to change the direction it is pointing. After that, the main thruster can give the rocket a push in the new direction. In order to do this, the location and heading of the spacecraft must be known perfectly.

How much 'large' is 'large way'? Is it some sort of deviation at a large angle? Has any instance occurred where any space probe intentionally had its course changed 'in a large way' due to some unforeseen objective or avoiding some big asteroid impact?

So first of all, every space probe changes direction constantly due to the gravitational attraction of the Sun, and the planets and moons. For instance the Parker Solar probe orbits the Sun every few months, changing its motion (as seen, for example by an observer stationary with respect to the Sun and above its North pole) through a full 360 degrees each time. For most probes most of the time, this can be approximated by saying they are following an orbit around a planet (for instance the Mars Reconnaisance Orbiter, which orbits Mars) or the Sun (the Parker Solar probe). Let's call that its "main orbit".

When a probe passes near to another Moon or planet, it main orbit will be changed. This change can be quite dramatic, and this is exploited by mission designers to get the probes to where they want them. Parker Solar Probe makes many encouters with Venus, in order to adjust its orbit ever closer to the Sun. The Voyagers used their encounters with Jupiter and Saturn to speed and direct their courses into the outer system. Cassini used many encounters with Titan to adjust its trajectory, and so on.

For changed introduced "artificially" by firing rockets, they tend to be relatively small, because every kilo of rocket fuel that you have to carry is a kilo less for instruments etc. The biggest ones I am aware of are the braking burns needed for probes to be captured into orbit around their destination planet. For instance the Gallileo mission to Jupiter slowed by 630 $ms^{-1}$ to enter Jupiter orbit. Most of the time, a much smaller burn months ahead of time will achieve whatever goal is needed while using less fuel.

The obvious exception are ion drive probes, such as Dawn and Osiris-Rex. These can achieve quite large changes in trajectory over a period of years by a very small but prolonged thrust using only a very tiny amount of fuel. These changes can amount to several $km s^{-1}$ over a few years.

Rereading the question, are you perhaps asking about unplanned changes. Several people have mentioned secondary missions in the comments, which were not planned for (at least definitely) at launch time, but are added later, using whatever fuel is left. These almost always involve very small amounts of rocket thrust, because there is rarely much fuel available. New Horizons rerouted after Pluto but by a pretty small velocity change over a long time. Gallileo and Cassini both had mission extensions but did most of their maneuvering using the gravity of various moons. These might be called replanned.

Closer to what you maybe have in mind -- the Cassini probe trajectory had to be adjusted to overcome a flaw in the design of the telemetry link to the Huygens lander. I can't find any data on how big a change that was.

New Horizons had a contingency plan to change course near Pluto if any unexpected moons were discoverd as it approached, but this was not needed.

Another contender would be the International Space Station, which changes course slightly from time to time to avoid orbitting junk.

In 1980, the two Voyager spacecraft passed Saturn. While Voyager 2 continued on to Uranus and Neptune, Voyager 1 could have either gone to Pluto or taken a closer look at Titan. The Voyager team opted for Titan, and the best route for this involved going under Saturn's south pole, which in turn redirected Voyager 1 up and out of the ecliptic plane of the Solar System, a change in angle of about 35 degrees. All gravity assists work this way to some degree, but don't usually change direction so dramatically.

The entire maneuver was executed as intended, but it wasn't planned in detail pre-launch, so I would consider this intentional and unforeseen (at launch).

Ulysses was deployed from the Space Shuttle, burned its solid rocket and flew towards the south pole of Jupiter which swung it around by about 90 degrees straight up out of the ecliptic!

Of course our Sun, being even more of a control-freak than mighty Jupiter said "Oh no you don't!" and maintained the spacecraft in a highly elliptical 6.2 year orbit with an inclination of 79.1° and and eccentricity of 0.60. 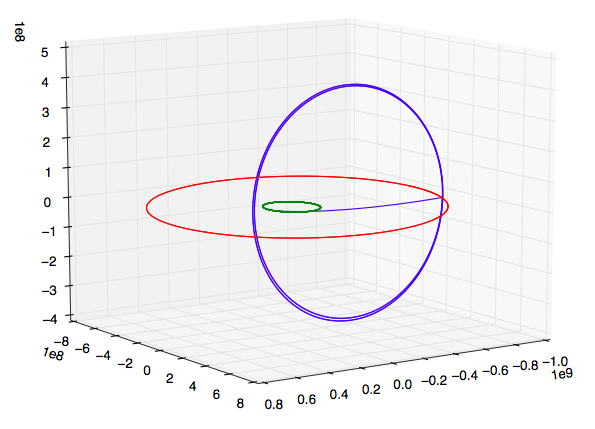 Source: Could a trajectory from Earth really wrap around Jupiter and then head straight into the Sun?

The Dawn [1] deep space probe expended over 10 km/s of delta-v after its launch, mainly to enter an orbit around the asteroid Vesta and then transfer to and enter an orbit around Ceres. This is equivalent to the delta-v delivered by the launch vehicle (which was a Delta II + PAM-D solid third stage) [2].

As far as I know this is the current record for the biggest post-launch velocity change. The mission was planned with this huge delta-v budget in mind.

It was possible only because the probe used ion thrusters instead of chemical rockets. "Dawn is powered by three ion thrusters that are provided with power by two massive solar arrays that span 19.7 meters from tip to tip. The engines deliver a thrust of 90 millinewtons at a specific impulse of 3,100 seconds; they are fed from tanks that initially held 425 Kilograms of xenon propellant that gave Dawn a delta-v budget of over 10km/s." [4] Another source even mentions a delta-v budget of 12 km/s [3].

The Japanese spacecraft Hiten was supposed to launch a lunar probe, the Hagoromo, into lunar orbit, but the Hagoromo failed, and so Hiten went into lunar orbit instead. Initially, Hiten was intended to only swing by the Moon and not enter lunar orbit. Upon the failure of the Hagoromo, the Hiten's trajectory was changed so it would be captured by the moon's gravity. This space probe utilized a technique called the low-energy transfer to create a large change in trajectory while using only a small amount of fuel.

While you asked for intentional large changes, there is also the Pioneer anomaly which was definitely an unintentional and unplanned small change in the probes orbit. This was most likely caused by thermal radiation being emitted from the probes unevenly providing a small and unexpected thrust.

5
Have space probe gone to unplanned destinations?
12
Did New Horizons also demonstrate the "Pioneer Anomaly"?
14
Flying fuel tanks! Which deep-space spacecraft had the largest fuel mass fraction?
4
How would a Jupiter flyby have helped to get to the Sun? Why was it later ruled out?
8
Delta-v obtained from Titan by the Cassini spacecraft; just how much of a "gas tank" was it?
6
Why did the Ulysses probe reach Jupiter much faster than Galileo?
3
Could a trajectory from Earth really wrap around Jupiter and then head straight into the Sun?
3
How many spacecraft deployed from the ISS have escaped Earth orbit? Are there plans for any in the near future?
3
Could any modern launch vehicle have put Ulysses in it's polar heliocentric without going to another planet first?
3
What's the highest heliocentric inclination achieved by a deep space probe, without using the outer planets?
See more linked questions

5
How do Field Programmable Gate Arrays affect the capabilities of probes?
5
Has any probe ever been launched into a highly elliptical orbit with say 20-30 year to orbit the sun?
6
Can you reach the Sun by only thrusting horizontally?
6
How are precision trajectory measurements made of trans-Neptunian spacecraft?
10
Are ion thruster trajectories classified as brachistochrones?
5
How do long range space probes adjust trajectory?
2
What probe has the shortest/longest operational surface time (non-Earth)?
1
How can I find the old reference orbit for JWST (from 2014) and get AltAz positions from Earth without learning Spice? Can Horizons do it? Can Python?