How fast is fuel escaping a rocket for it to reach the escape velocity 11 km/s?

I was having a discussion with a person and we were talking about whether or no the fuel had to be pushing out of a rocket at 11 km/s in order for the rocket to reach 11 km/s.

I said it has to be because of the fact that there has to be an equal and opposite reaction to force the rocket to that speed. Neither of us know enough about physics to find the actual answer.

The velocity of a rocket can exceed its exhaust velocity.

It is possible for the velocity of a rocket to be greater than the exhaust velocity of the gases it ejects. ...The thrust of the rocket does not depend on the relative speeds of the gases and rocket, it simply depends on conservation of momentum. 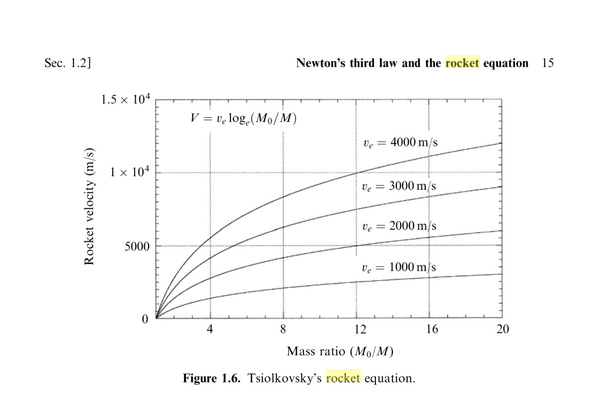 It can be seen in Figure 1.6 that the rocket can travel faster than the speed of its exhaust. This seems counter-intuitive when thinking in terms of the exhaust pushing against something. In fact, the exhaust is not pushing against anything at all, and once it has left the nozzle of the rocket engine it has no further effect on the rocket. All the action takes place inside the rocket, where a constant accelerating force is being exerted on the inner walls of the combustion chamber and the inside of the nozzle. So while the speed of the rocket depends on the magnitude of the exhaust velocity, as shown in Figure 1.6, it can itself be much greater. A stationary observer sees the rocket and its exhaust passing by, both moving in the same direction, although the rocket is moving faster than the exhaust.

Note that based on this graph, a rocket with an exhaust velocity of 4 km/s can attain 11 km/s.

An intuitive way to think about it: You have a big rocket, composed of two parts of equal mass: the payload part and the fuel part. You launch the exhaust (fuel) backwards at 1 km/s (for simplicity: all at once so you don't accelerate any of it forward first), and so clearly the payload part is now moving at 1 km/s forward. Open the fairing and reveal the payload: a rocket just like the first, only half as big, but same construction: half of it fuel, half payload! Launch its fuel backwards at 1 km/s, and the front part will accelerate by 1 km/s forward - but it was already moving at 1 km/s so now it moves at 2... and your newly ejected fuel is at stop relative to the launch speed. Now reveal the payload... which is again same type of rocket except half the size again! Once you launch its fuel backwards, the rocket will move at 3 km/s forward while the fuel - will move at 1 km/s forward!

Of course halving the size every time puts a serious damper on how far you can push it, and if you look at how much of the launch mass was fuel and how much payload, you can see how it goes - why rockets are ~95% fuel by weight, and why you need such an enormous rocket to launch a pretty tiny spacecraft. It also shows where specific impulse comes into play: what speed would you reach if instead of pushing the fuel away at 1 km/s every time you could push it at 3 km/s?

Assuming a constant exhaust velocity, integrating this with respect to time results in the ideal rocket equation for a single stage of a rocket: $$\Delta v = v_e \ln\left(\frac{m_0}{m_f}\right)$$ where

As a rule of thumb, trying to make a single stage of a rocket have a delta V that is more than three times exhaust velocity is pushing the rocket equation a bit too hard. That would require, at a minimum, a rocket whose initial mass is 95% propellant. A more realistic value is a rocket whose initial mass is in the neighborhood of 90% propellant. This results in a rocket that ideally has a delta V that is 2.3 times exhaust velocity.

This, by the way, is why the concept of a single stage to orbit rocket is appealing and yet seemingly just out of grasp. The delta V needed to put a payload into low Earth orbit ranges from over 9 km/s to a bit over 10 km/s, depending on the rocket. A rocket whose initial mass is 90% propellant and whose exhaust velocity is 4 km/s (both of which are feasible) can ideally achieve a delta V of 9.2 km/s. This is just in range of what is feasible. The problem is the word "ideally". That a single stage to orbit rocket is just on the cusp of what is feasible means that organizations that want to put things into orbit or beyond inevitably take on the significant added complexities associated with multistage rockets.

Here is what I hope is an intuitive argument that it does not need to be the case that the exhaust velocity is greater than whatever velocity the rocket is to achieve.

First of all, think about a 'rocket' which is powered by someone sitting in the back throwing pebbles out of it. The pebbles weigh $0.1\,\mathrm{kg}$ and the person can throw them at $10\,\mathrm{m/s}$ relative to the rocket.

And obviously this is true for any velocity: if I start at $0\,\mathrm{km/s}$ and I have enough pebbles to throw, I can get to any velocity I like.

I will need a lot of pebbles though.

Now consider the situation in a different reference frame. Your rocket isn't motionless at all, it's actually coasting through space at a constant speed (note: this scenario is fundamentally identical to being at rest). That speed can be anything, depending on your reference frame. But even in this new reference frame, throwing mass out the back of the rocket will still accelerate it. It doesn't matter what your speed is in your chosen reference frame, or how fast you throw the mass - it will always result in the rocket moving faster. From this, you can see that even a rocket moving very quickly can accelerate by ejecting mass an an arbitrarily low speed.

Any mass ejected from the back of a rocket will increase the rocket's forward velocity. Therefore, a rocket can move faster than the speed of its exhaust (and in fact can reach speeds arbitrarily close to c, so long as it has mass to eject). If this was not the case, it would violate the conservation of momentum - if you change the momentum of the exhaust but not the rocket, the overall momentum of the system is no longer constant. A change in exhaust momentum will always result in a change in rocket momentum, regardless of their relative speeds.

There is no lower limit; however, as you lower the exhaust velocity, more mass must be exhausted.

Rocket propulsion works by the conservation of momentum. The change in momentum of the exhaust (its mass times its velocity) is equal but opposite in sign of the momentum of the rocket. I've illustrated this below. 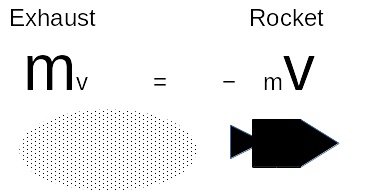 In order for the products of mass times velocity to be equal in amount, the exhaust's large mass must be multiplied by a small velocity (small v above), and the rocket's small mass is multiplied by a large velocity (large v above).

The minus sign in the above equation means that the velocities are in opposite directions. The exhaust moves backward, and the rocket moves forward.

A similar phenomenon happens with a gun and a bullet. The gun is like the exhaust: high mass but low velocity (the "recoil"). The bullet is like the rocket: small mass but high velocity.

It's more complicated with actual rockets, since the exhaust is coming out over time rather than in a single instance, and rockets are generally used in gravitational fields, but the basic principle holds.

Not the answer you're looking for? Browse other questions tagged escape-velocity or ask your own question.

5
What spacecraft has had the greatest total propulsive delta-v?

31
Why not travel to Mars in 2 months?
20
What is the escape-velocity for our galaxy?
144
Couldn't I escape Earth's gravity traveling only 1 mph (0.45 m/s)?
2
Would it be possible to go beyond Jupiter without making any slingshot?
31
How could an object barely exceeding escape velocity from the Moon eventually reach the Earth?
2
How to achieve escape velocity from Ceres?
1
Confusion with direction (vector) of minimum velocity required to reach an orbit and escape velocity
16
Non-orbital takeoff and landing?
5
Would a sniper bullet fired on Ceres reach orbital or even escape velocity?
14
Why is it so hard to build crewed rockets/spacecraft able to reach escape velocity?