Could you fly on the Moon, in Earth's atmospheric pressure, by flapping wearable wings?

According to this site, NASA produced a public domain painting representing what the Olympics could look like on a lunar colony. In the upper right of the picture, there are people flying by flapping wearable wings. Given Moon's gravity with Earth's atmospheric pressure in a lunar colony dome, like the one shown here, could this be possible? How much force would you have to push down on your arms to take off? Would taking off be feasible, or is just gliding? 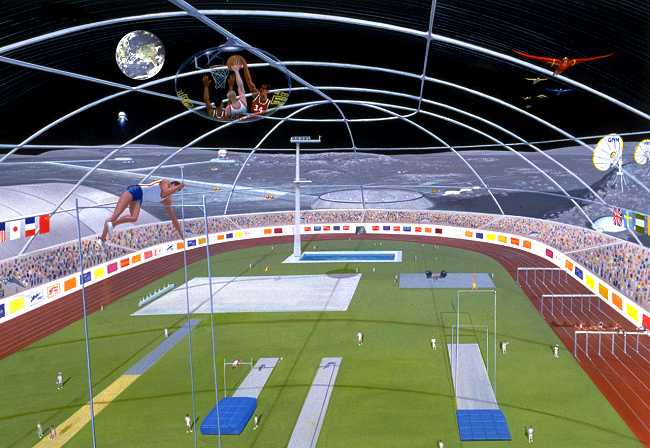 The lift force you would need to produce would have to be equal (stable flight) or greater (take off) than the force pulling you back towards the moon. If your mass is average for a male at 62kg, the force from the lunar gravity would be F=ma, = 62kg x 1.622m/s2 = 100N (almost exactly).

This is as far as you can really calculate without specifying shape/size of the wings etc. However this site shows that the human arm can exert around 50N -60N (that's per arm). So with the correct design it seems like you have 1.1 times the required force available. This all ignores the mass of the wings themselves, the percentage of force that is applied in the appropriate direction etc, it at least implies you would be able to hover on the spot until you get tired. I suppose doing so would become comparable to the world record for treading water - after 85 hours you'd be pretty bored.

This is a bit late but there have been claims that humans could fly by wing flapping on Titan.

Titan has a surface gravity of 1.352 meters per second squared, or 0.14 gravity.

Thus at a rough guess any flying area on the Moon might have to be pressurized with 1.175 the atmospheric density of Titan's atmosphere, which is already significantly denser than Earth's, in order to be equally flyable. Thus the lunar flying area might need air too thick for humans and they might need breathing apparatus to fly by flapping their wings.

Not the answer you're looking for? Browse other questions tagged the-moon crewed-spaceflight colonization humans myth-busting or ask your own question.

5
Could increased atmospheric pressure act as a countermeasure for effects of microgravity?
19
Do you need a mattress on the Moon?
31
How far can you fall on the Moon without injury?
20
How fast could a person run on the Moon?
8
Could you launch rocks from the Moon to hit Earth?
7
Could the Apollo astronauts distinguish Earth's continents and oceans from the moon?
13
Why would spacecraft docking to the ISS have a different atmospheric pressure?
8
What does the Moon's gravity feel like? If you don't move, could you still tell you're on the Moon?
1
Why doesn't NASA fly its rockets on suborbital trajectories to the Moon?