How does gravitational stability change with the distance from special places such as geostationary orbit and lagrange points?

First, it is nothing special with the geostationary orbit regarding gravity, this is just the location where an object seems to hoover in the same spot in the sky. That is dependent on the rotation of the Earth, and has thus no forces attracting it. A normal station keeping budget for a satellite in GEO is typically 50 m/s of delta-v a year. If I interpret your question as how much delta-v it is going to cost us to still hover, even though we are a little bit off, the delta-v cost is 0.5 m/s per year per meter. This is not exactly scalable, but accurate enough within a few hundred kilometres.

As for L-points, they come in two types. Stable and unstable. In the stable points, like L4 and L5, an object that is a little bit off is still hold in place and therefore "orbiting". In the unstable points, an error is growing until the object escapes. Imagine this as the difference of balancing marbles on a sphere. 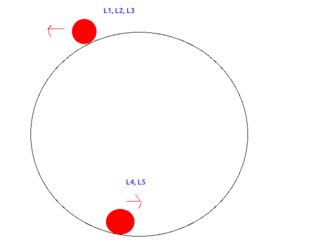 Because any error grows over time, the unstable points do not have a size, they are just points. But the delta-v cost does not have to be high, and satellites can indeed orbit them for some time, like the Genesis mission did. This is necessary if you want to accommodate multiple satellites in the same L-point.

As for the size of the L4 and L5 points, this question has been asked before, see Maximum Amplitude of a Lissajous Orbiting Object in a L4 or L5 Position at astronomy. A particular amplitude is not stated though, but from the common illustration of L-points, it seems like an object can go almost back to the L3 point in an orbit. 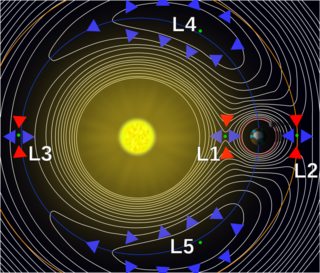 Note that for example Venus is at sometimes closer to the SEL4 and SEL5 points than the Earth, thereby causing significant perturbations, necessary to compensate.

Not the answer you're looking for? Browse other questions tagged artificial-satellite gravity lagrangian-points geostationary or ask your own question.

3
Why are the Trojan libration points equidistant and not mass weighted?

19
How deep is the force well of L4 and L5 Lagrangian Points of Earth-Sun set?
8
Can a whole planetary system have Lagrangian points?
16
How does orbital eccentricity affect positions of Lagrange points $L_4$ and $L_5$?
3
What would be the delta-v of rendezvousing with temporarily captured asteroids in Sun-Earth L-points?
6
Is there a term for the distance from an object at which it's gravitational pull is negligible?
2
How to calculate the trajectory needed to enter geostationary orbit?
10
How much is a geostationary satellite expected to deviate from the geostationary orbit?
1
Getting from LEO to a station in geostationary orbit and docking with it using a Hohmann transfer?
0
What Gravity does the Sun affect items with at the distance of 1 AU?
4
Do Lagrange points still exist if there is significant radiation pressure on the third body from the first?