Why aren't the ISS HDEV cameras left on at night?

When watching the ISS HD Earth Viewing Experiment, I realized that they turn the cameras off when the ISS enters night. How often are they turned off when its dark? How come they aren't left on?

I believe they are and my network analysis tools show nearly constant transmission (data bandwidth remains the same), even when the image is all black or all gray. According to High Definition Earth Viewing (HDEV) Experiment quick notes on its USTREAM channel:

Same is repeated in German on the Columbus Eye pages by the University of Bonn. But it doesn't say anywhere that the cameras are switched off during that time, and I get stream bandwidth in the average of 700 - 800 kB which cannot be down to buffering, since it remains constant for the whole duration of ISS's orbit in Earth's shadow.

According to NASA on High Definition Earth Viewing:

HDEV Design for Operations: The HDEV operates one camera at a time. The HDEV is designed so that when the system is initially powered on, after a 1-2 minute warm up period, the Cameras are turned on one at a time in a repeating cycle. The Forward looking camera is powered first, followed by the Nadir and each aft looking camera, such that the HDEV video “follows” a location on the earth as the ISS passes overhead. This auto-cycle mode of the HDEV does not require any input from ground operators, so the HDEV can be operated any time that the ISS power and data resources are available, without requiring a ground controller present to operate the payload. The only command required, is the initial “power on” command, which is performed by ESA’s Columbus Control Center as schedule by ISS Payload Operations.

So here's what I'm thinking is happening;

So it appears to me that during a lot of the time in one orbit, there simply isn't anything to see and that's why the screen remains black. For example, here's a screen capture from the aft facing camera when the station was entering the Earth's shadow, with a barely visible arc of Earth's atmospheric glow at dusk on the left hand side of the image: 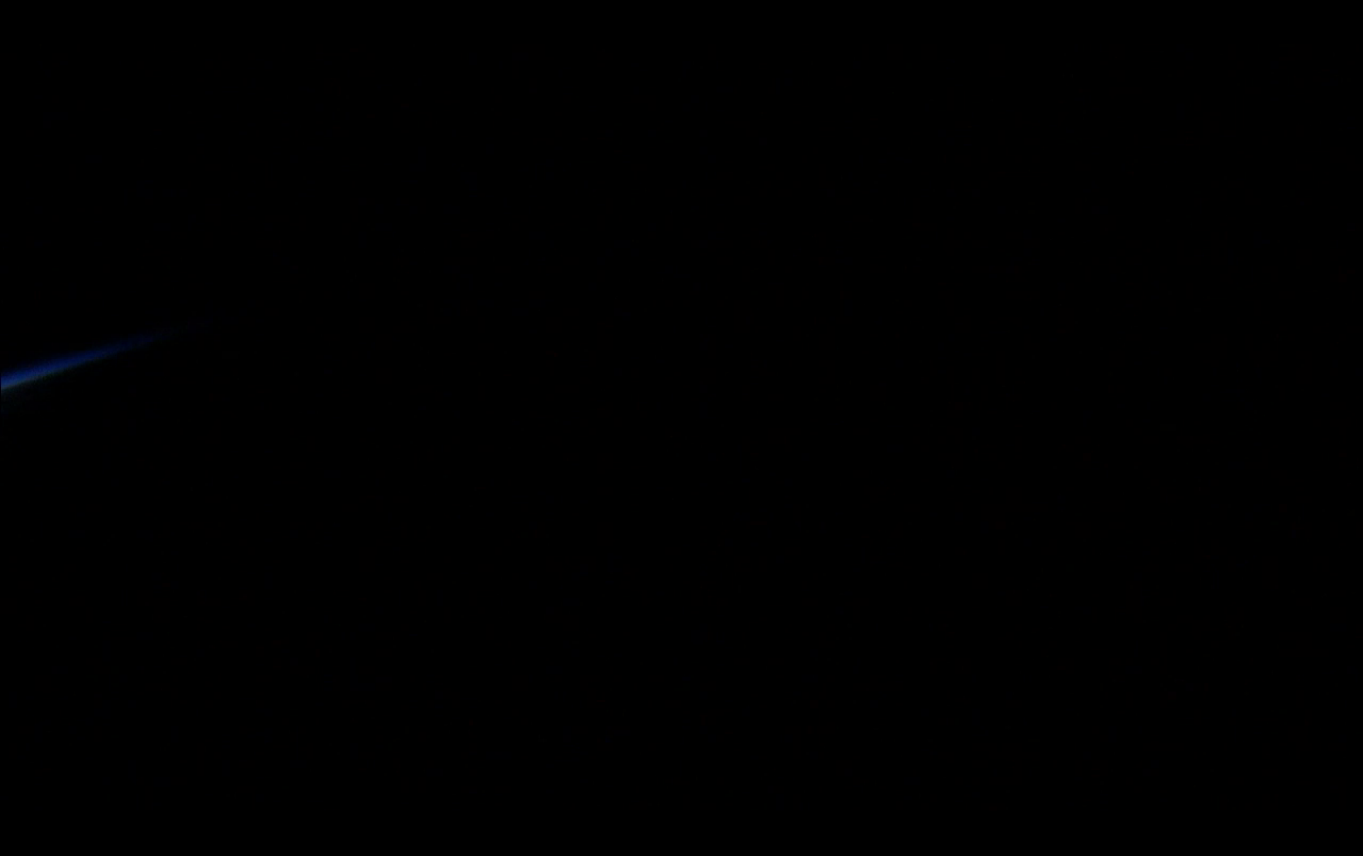 As you can see, the rest of the image remains uniformly black, even though the camera is apparently on. The remaining question is, why don't we see any lightnings, meteors and light pollution on the surface of the Earth?

For lightnings and meteors, I doubt that the frame rate of these transmissions is fast enough to catch most of them. Remember, there is limited bandwidth available to them, so the streams would be highly compressed, and the cameras are COTS (Commercial Off-The-Shelf) quality. And a sporadic bright artefact that can be seen would more likely be produced by on-sensor noise, especially when the station is exposed to more radiation when over the South Atlantic Anomaly.

As for light pollution, the cameras don't seem to employ any lens filters, like the polarizing filters that could help reduce atmospheric light diffraction and suppress glare, and their angle w.r.t. the atmosphere is simply too shallow, so all the relatively small point sources of light are blurred-out with the rest of the background, and camera sensors are not sensitive enough to pick up such small differences in illumination, or stream compression is set too high and ignores such small difference between the individual frames.

To somewhat easier appreciate image quality of these HDEV cameras, and how much the atmosphere blurs out surface features, here's my own work in trying to improve image quality of a few HDEV snaps, using only simple image post-processing filters (output levels, color normalisation, unsharp mask,...), "before and after" style: 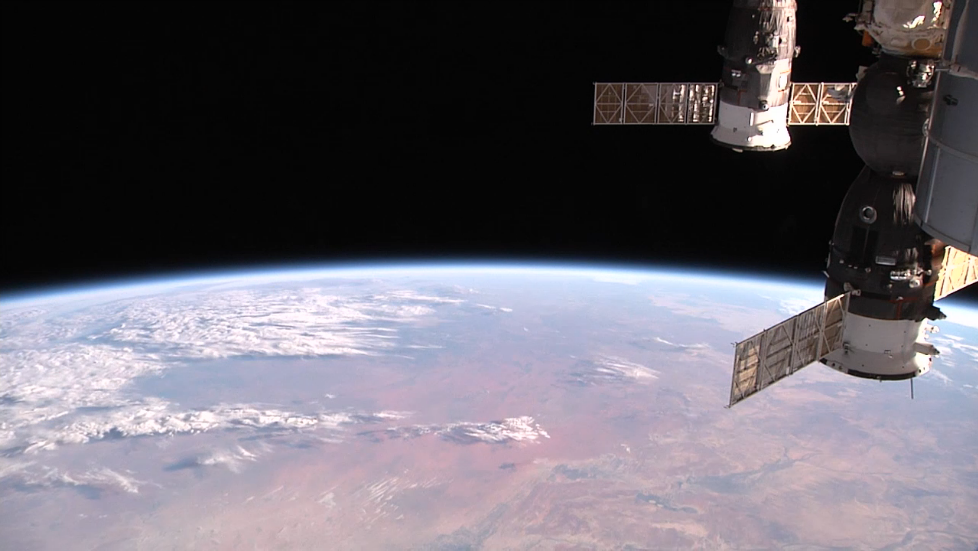 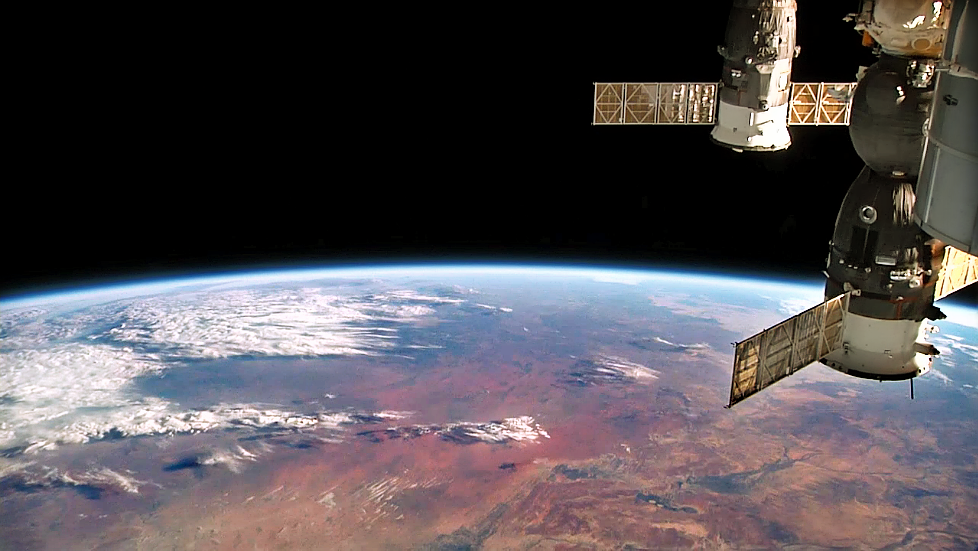 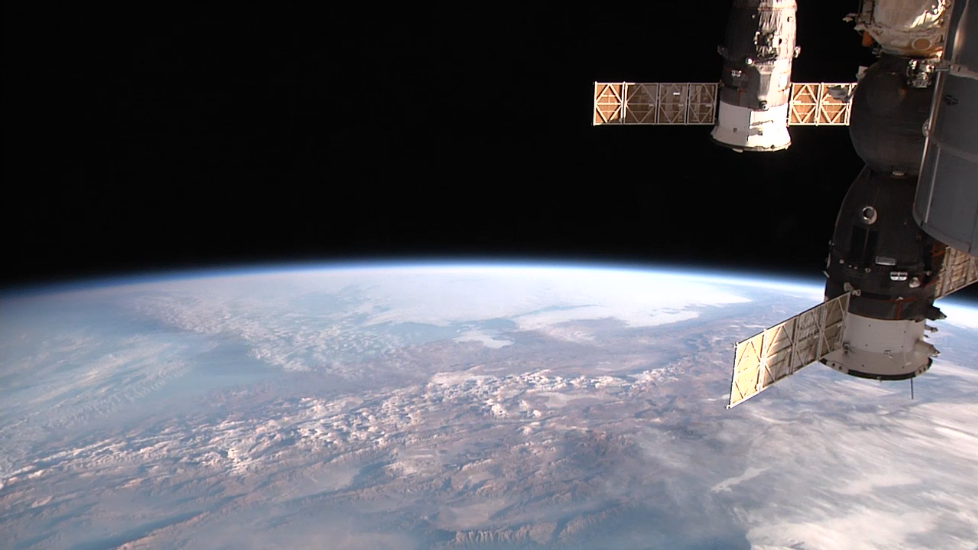 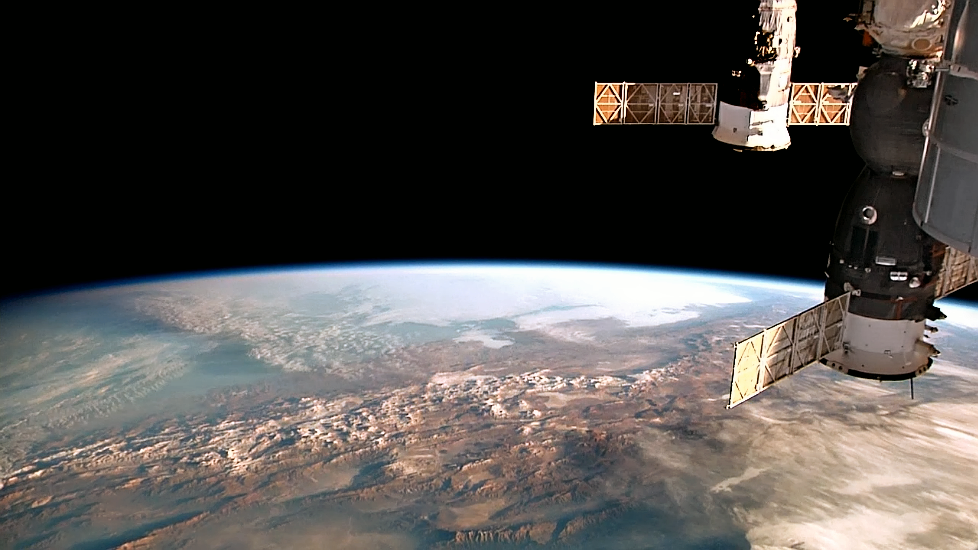 And this is one such "black frame" from one of HDEV cams a few minutes ago, somewhere over South Pacific Ocean, west of Ecuador: 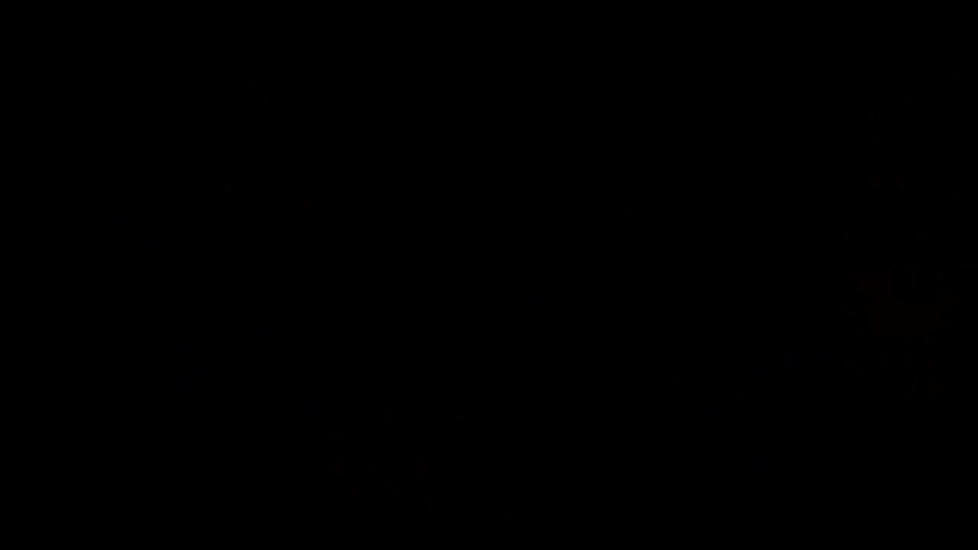 It's probably hard to believe looking at this captured frame on most monitors, but the image uses no less than 69 unique colors and the live stream data rate was in excess of 700 kB/s during the capture. This is the same frame, with highly exaggerated difference between pixels (using color palette stretching): 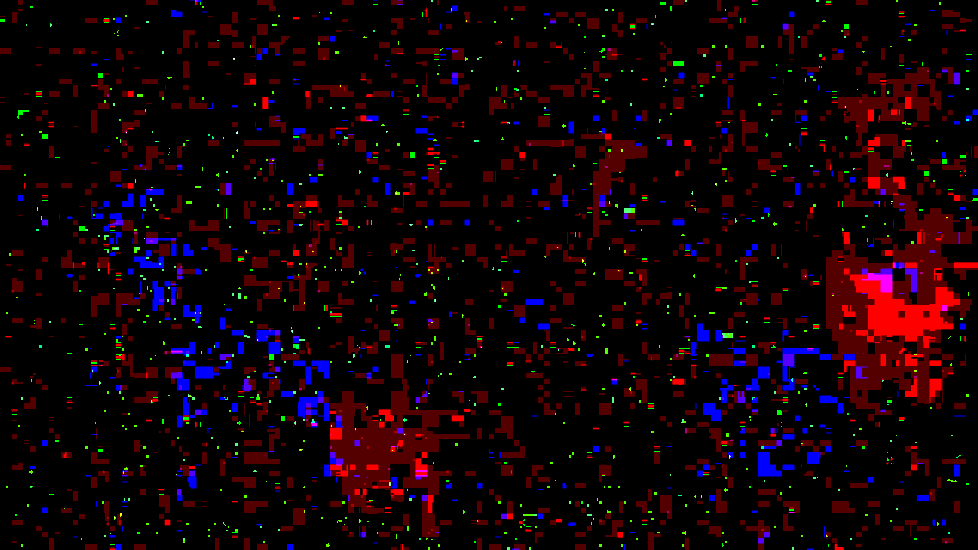 I actually worked on the team that built HDEV (came across this question while googling).

TildalWave's answer is mostly correct, though we leave the cameras on during black (ISS night) to help with dead pixel analysis. The aperture and focus settings are fixed for sunlight viewing to better characterize any radiation caused issues with the sensors (the primary purpose of HDEV). If something is extremely bright and close-ish to the station you might see it, but doubtful. I remember watching it once in a severe thunderstorm system over Brazil and could just barely see tiny specs of lightning, though even then it wasn't in complete night but only partial.

We sometimes change the cycle between cameras/durations to try and capture specific events either on the surface or vehicles docking to the station within view. Nominal ops though is just cycling through the cameras every ten minutes or so. If the payload has to be reset, it will default back to sixty seconds per camera.

Under good circumstances it is possible to see city lights during night passes. The normal image is almost black, but with some image processing you can often find such light sources.

2
Why does the ISS HDEV camera switch from rear view to front view just before rear view is aiming towards Antarctica?
-3
Whats with all the ISS camera troubles?

9
How does the ISS adjust its solar panels?
19
How often does the ISS orbit align with the day/night terminator?
21
Why does the interior of the ISS appear so disorganized?
4
What does the ISS look like by night?
9
How are the orientations of the ISS' eight independent solar arrays optimized?
1
How is the atmosphere in the pressurized housing of ISS' HDEV cameras managed? Outgassing addressed?
8
Why is there a black donut in Perseverance's SkyCam? Is it always used to block the Sun? (sky cameras on Earth don't) How does it work?