How many burns did the Apollo 11 mission need?

I'm wondering just how many burns the Apollo 11 mission required.

Did they first have to reach a circular orbit around Earth by a single burn at apogee or did they target the Moon immediately?

Then, when they've reached the Moon did they have to retroburn at perilune to circularize, or was the trajectory calculated so that it happened automatically?

On their way back was a single burn enough to leave the Moon or did they have to execute some corrections along the way?

According to the plan, an Apollo mission to the moon uses eleven-ish burns. Here are the expected maneuvers: 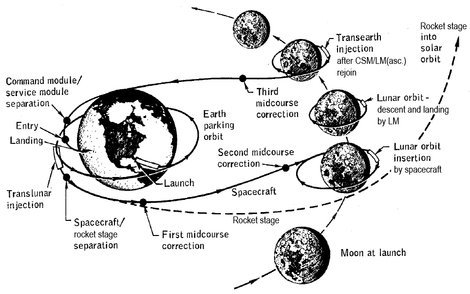 The accepted answer describes the general Apollo mission plan, but as the question references Apollo 11 specifically, we can check the mission timeline to see all the maneuvers done during the mission.

In later mission timelines the engine used for midcourse correction is consistently called out, but for Apollo 11 I had to check the transcripts to verify.

There was one SPS midcourse correction burn on the outbound leg of the trip. Four optional corrections were scheduled in the flight plan, but three were canceled as unnecessary. (Only one or two are ever needed, but by scheduling four they gain a lot of flexibility.) The sole midcourse correction on the return leg was done on RCS according to the transcripts.

So that's 11 total burns if you count each stage of the ascent separately.

There is one more burn that's not strictly necessary to complete the mission; the S-IVB stage used its auxiliary propulsion system to fine-tune its trajectory for a lunar slingshot maneuver, or, on some later missions, to crash into the moon.

47
Why did Saturn V not head straight to the moon?

12
What did Apollo need the crewed Command Module for?
20
Could an Apollo LM land uncrewed?
5
What's the closest that an Apollo mission passed GEO on its way to the moon?
4
How many AGC keystrokes did an Apollo rendezvous take?
3
STK Astrogator Earth Flyby
4
Apollo lunar mission trajectory animation
3
What is the cheapest possible way to land a crew of 2 on the moon?
15
Would the Apollo LM be able to land on Mercury?
4
Did any Apollo missions have enough fuel left to bring back the LM ascent stage?