I watched the NS-13 New Shepard launch and descent video.

The rocket descends and it reaches a maximum velocity of 2,602 km/h

Then it uses air brakes to reduce the velocity to 370 km/h and then it fires the BE-3 engine to reduce it even further.

Because from 2,602 to 370 looks like an enormous reduction for a falling object that is supposed to increase speed as it falls

Because from 2,602 to 370 looks like an enormous reduction for a falling object that is supposed to increase speed as it falls

A falling object increases speed only up to the point at which air resistance (which increases with the square of speed) balances the force of gravity (which remains constant). This balance point is called terminal velocity, and varies mostly with the mass and cross-sectional area of the falling object, and the density of the surrounding air.

That last part, the air density, is the most important factor. At 28km altitude, the air density is only about 2% of sea level. During that descent, air resistance increases by a factor of 50, and your speed falls accordingly.

Almost all of this reduction in speed would occur with or without the air brakes, the same way it does for any crewed-capsule reentry. The air brakes, when deployed, slightly increase the cross-section of the stage, and thus the air resistance, which lowers the terminal velocity.

The other function of the air brakes is to improve the stability of the descending stage. Objects moving ballistically through air tend to orient themselves with the denser end forward and the air-draggy end backwards -- like a throwing dart, with a heavy head at one end and a finned tail at the other. If the stage starts to turn in flight for any reason, the extra drag on the extended air brakes tends to straighten it back out.

The biggest difference, more than the air brakes, is the increasing atmosphere. When New Sheppard reaches the peak point, it is well above the atmosphere. It has 70 km to build up speed as it falls down, with essentially no atmosphere at all. Even from 30 km to 10 km, the air is still pretty thin. Only at 10 km does the atmosphere actually reach enough to significantly affect the speed, which will cause it to slow down.

The air brakes, while they do actually slow the booster down, are as much to help guide the booster than anything. The booster aims to land at a specific point, the air brakes help it to navigate to that point. They will significantly increase the area. I'm not sure exactly how much the air brakes do in terms of increasing the drag, but the bigger effect is just that it is getting lower and entering the atmosphere, which will slow it down quite a bit.

Posting the two images of the deleted answer 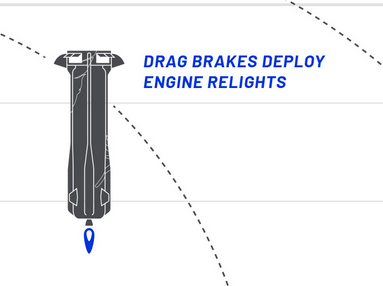 Not the answer you're looking for? Browse other questions tagged landing-gear or ask your own question.

6
How many burns does New Shepard have during a descent?