Why do the contents of the Space Shuttle External Tank not match the mixture ratio of the engines?

That's an oxidiser to fuel ratio of 5.92

Meanwhile, the Space Shuttle Main Engine has a constant mixture ratio of 6.03

Where is that extra hydrogen going? (or extra oxygen appearing...?) The Space Shuttle used regenerative cooling and staged combustion, so all the fuel and oxidiser should eventually end up in the combustion chamber despite turbo pumps and engine cooling needs.

tl;dr as SF said in a comment "...they always packed a little more hydrogen than oxygen (for that ratio), so that at the end of combustion they wouldn't risk running oxygen-rich (and as result engine-rich)."

If you are interested in details, please refer to this propellant loading table for the following explanation. 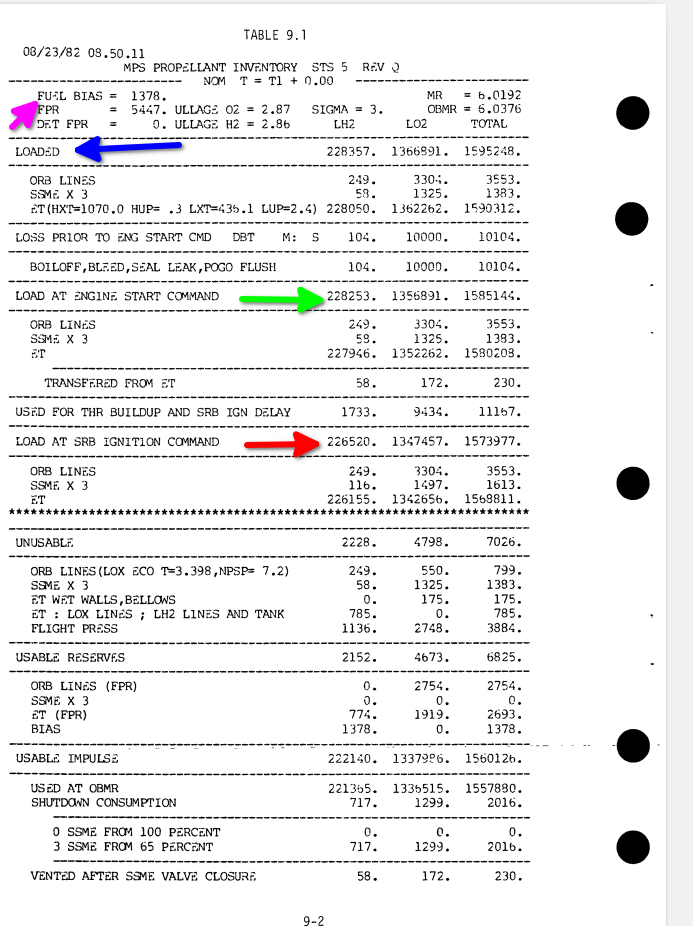 From the answer to this question: Is "liftoff mass" = "ignition mass"?

An important thing to know when interpreting this information is that there is not just one mixture ratio for the engines.

This is because the shuttle main propulsion system used autogenous pressurization. Some of the propellant entering the engine was vaporized and returned to the tank as pressurant - it did not flow overboard.

So there are two mixture ratios in play:

Since the pressurization flow of both propellants was ~ 1 lbm/s, but the inlet flow of LH2 was much less than the LO2, the OBMR was always higher than the MR. You can see these numbers in the upper right corner of the chart.

(Also note that the mixture ratio was programmable for the SSMEs and changed over the course of the program. This chart is for STS-5, which was the last flight of the original version of the SSME. See Taxonomy of the SSME.)

So if you wish to match the overboard mixture ratio, the line in the chart is USED AT OBMR, defined as

The FPR and FUEL BIAS are included in the USABLE RESERVES as propellant that is not planned to be used but is available for off-nominal situations. A lot of work went into safely minimizing the usable reserves because every pound of this propellant was a pound that could not be used for payload.

Liquid hydrogen is much colder than liquid oxygen, the heat of vaporisation is much lower too, therefore more volume of hydrogen than oxygen is evaporating in the tanks from ignition until engine shutdown.

It is difficult to compensate the evaporation with more insulation for the hydrogen tank, the volume is about three times the volume of the oxygen ( 1,497,440 to 553,358 l), so also the tank surface is bigger. Both tanks have the same diameter (8,4 m), but the hydrogen tank is much longer (29.6 to 16.6 m). The insulation should not weigh much more than the saved hydrogen.

So the ratio of hydrogen to oxygen in the tanks at launch is bigger than the ratio used for the engine. At engine shut down hydrogen is feeded longer than oxygen to protect the engine from oxidation. So there should be more hydrogen left just before shutdown.

7
Which STS mission raised the normal engine throttle above 100%, and what change to the SSME made that possible?
2
Is "liftoff mass" = "ignition mass"?

17
How feasible is it to use aluminum and liquid oxygen as future propellant sourced from the moon?
6
Why did the External Tank not have its own engines?
4
Is it possible to estimate the nozzle characteristics of the Rocketdyne HG3 engine?
6
How big of an external tank to replace the shuttle SRBs with more LH2 and LO2?
2
Why didn’t the space shuttle external tank have pressure-relief vents?
23
Pre-mixing cryogenic fuels and using only one fuel tank
10
How were the Space Shuttle and its External Tank connected (structurally)?
5
Why did the Space Shuttle dump excess fuel from the external tank?