Would it have been possible to launch rockets in secret in the 1960s?

I had a discussion the other day with a friend who claimed that many more cosmonauts were lost during the the Space Race than the Soviet government publicly admitted. He argued that it was easy for the USSR to hide their rocket launches and report only the successful ones because there wasn't a network of surveillance satellites yet, and there was no direct way that reports from local eye-witnesses would reach the West.

There is already a question on spaceSE about these "Lost cosmonauts". The consensus seems that these stories are either hoaxes or lack reliable evidence.

But I'm still wondering whether the claim of secret rocket launches is technologically plausible for that historical period. I think that there was much public participation in the early days of space exploration, with radio enthusiasts all over the world listening attentively to every signal transmitted from vehicles in orbit (this website hosts some historical audio recordings of radio signals from the Space Race, including recordings of Sputnik-1 and Explorer-1). And if amateurs did that, it's highly probable that both involved nations (USSR and USA) closely monitored all radio signals in order to gather as much information about their opponent's steps as possible (we know that this is what the ECHELON program did at least since 1972).

Yet, as I'm neither a radio nor a rocket expert I might be overestimating the difficulty of concealing a rocket launch during the early stages of space exploration. So, would it have been possible for the USSR (or NASA, for that matter) to launch rockets in secrecy at that time?

Very unlikely. The first launch of a satellite in space, Sputnik, was launched without any prior public announcement. The US knew about it 7 months before the launch happened. It is pretty inconceivable that a launch could have happened that we wouldn't have had any knowledge of beforehand. The linked CIA papers even predicted the launch date to within a 2 week period of time before it happened, and were predicting Fall 1957 6 months prior.

Satellite launches can be visibly seen for hundreds of miles, and tracked on radar even further away. This was the fact even in the 1950s and 1960s. The Ballistic Missile Early Warning System (BMEWS) could detect targets at a range of 2000 miles in 1958. Furthermore, the Missile Defense Alarm System (MIDAS) was operational starting in 1961 to a limited capacity, and that network could detect the launch of ballistic missiles from the USSR.

Furthermore, once an object was in space, the US Space Surveillance Network, also known as Space Track, was set to track objects in space, reaching operational capacity in 1961. If it remained in orbit for longer than a day, it would have crossed over one of those sites and been tracked. A short flight, such as Yuri Gargaran's, probably didn't pass over the fence. The trajectory can be seen below. 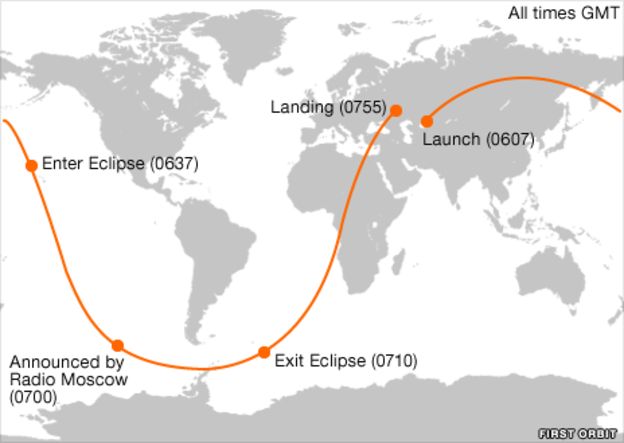 It is pretty much inconceivable that a launch could have happened from the USSR that the US would not have known about. It might have been possible to launch from some remote South Pacific island in a southern direction to get to orbit, but there is no evidence of that happening in those days. It would have become virtually impossible once the MIDAS network was running mid-1960s. And even if something had happened, the US would have no doubt tracked it quite early.

In latter part of the 1960s it would depend on any nation having developed over the horizon radar (OTHR) capabilities that could provide significant coverage of its opponents launch sites.

Australian research into HF radar IN the 1960s made some useful discoveries. One was that a rocket departing the atmosphere produced a very large and easily detected bloom in the OTHR return signal.

This had very significant implications for ICBM launch detection, and the US was most interested. In various technical talks in the 1960s, the US confirmed their own OTHR experiments which managed to detect distant aircraft – confirming to the Australian researchers they were on the right track.

Given the tendency of early missiles and rockets to blow up, it was normal for them to transmit telemetry to ground stations. Since they were at high altitude careful receiver design could allow this to be captured outside national borders and is potentially very valuable in determining system capabilities.

From the late 1950s the US was spending substantial resources doing this from various sites and also monitoring the airborne units recovering hardware. This means they in many cases they knew not just of successful launches but of launch attempts based on observed activity.

As such a launch on a human type profile with human type telementry and/or recovery operations would quite likely have been identifiable, possibly before the launch itself (eg even a fatal launch failure).

The question remains would the US have chosen to reveal these capabilities at the time or over intervening years in a source suitable for use as a stack exchange reference.

Relevant to this question is that one of the primary sources for the 'lost cosmonaut' mythos are two Italians who were listening to telemetry where the fact that it was credible at the time for a skilled amateur to receive telemetry made it somewhat plausible, but the fact that no others did at those specific times also brings substantial doubt. Orbital dynamics and line of sight from Turin makes reception after failed skip re-entry, reception during the hot phase of re-entry and 'loss of control and veering into deep space' all doubtful, with further doubts listed on the linked Wikipedia page.

Taken together it suggests that launching in secret in the 1960s would have been possible, but would have required a great deal of effort and involved basically giving up any opportunity to learn lessons from the launch, leaving a major question of what was intended to be gained.

Also relevant is the experience with Starlink indicates that in LEO even quite small craft are visible if in orbit long enough to get the right illumination angle for a given observer to see, making 'stuck in orbit' scenarios less plausible for a completely secret launch (where it cannot be called a satellite).

Not the answer you're looking for? Browse other questions tagged launch history space-race or ask your own question.

4
Is there any truth to the claims of cosmonauts lost in space?
4
What radio frequencies were used by the Soviet space program circa 1961? ("Lost Cosmonaut" recording)
2
What's the most intense beam ever sent from Earth?

11
How risky is launching a rocket during a geomagnetic and solar radiation storm?
5
Where are the "World's First Space Engines" now?
11
How many rockets have been launched into space? (roughly, of course)
3
What satellites were launched into a polar orbit from Cape Canaveral in the 1950s and 1960s?
10
Who was the first to successfully implement on practice ablative heat shield?
6
Have traditional spinning hard drives ever been used in space outside of pressurized crewed areas? Ever beyond LEO?