How do US citizens vote in space?

Astronaut Kate Rubins tweeted that she has voted while being on the ISS: 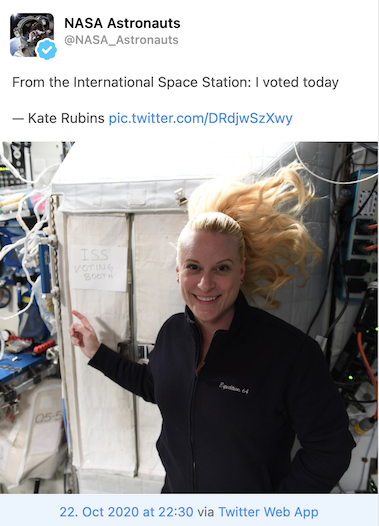 How does that work? Did she have some paperwork with her that she can send down to earth with a spacecraft soon? The expedition 63 crew departed a day earlier, so maybe she actually voted earlier and crew 63 have taken the papers with them?

(I'm not sure whether this question is a better fit for Politics.SE or Space.SE; feel free to migrate if Politics.SE would be the better place.)

The relevant law is Texas Administrative Code Rule §81.35 "Voting from Outer Space" and who's going to vote against that? It is a very small modification of Texas early voting law.

(a) A person who meets the eligibility requirements of a voter under the Texas Election Code, Chapter 101, but who will be on a space flight during the early-voting period and on election day, may vote under this chapter. In order to vote by this method, the voter must apply by a Federal Postcard Application ("FPCA") and meet the requisite deadlines under state law. The FPCA may be submitted by fax or other electronic means.

(b) The National Aeronautics and Space Administration ("NASA") shall submit in writing to the Secretary of State a method of transmitting and receiving a secret ballot for persons on a space flight during an election period. The Secretary of State shall approve, deny, or request further information from NASA on the proposed method of transmission.

(c) Proposed changes to an approved ballot transmission method shall be submitted in writing to the Secretary of State for approval.

The astronaut applies to vote in space using the same Federal Postcard Application used by citizens residing outside the US. The exact voting procedure is worked out by NASA and the Texas Secretary of State.

According to NPR, the procedure is...

Voting from the space station is similar to voting absentee from anyplace on the planet — except instead of relying on the U.S. Postal Service to deliver the ballot, Rubins will get hers forwarded electronically from Mission Control in Houston.

"Using a set of unique credentials sent to each of them by e-mail, astronauts can access their ballots, cast their votes, and downlink them back down to Earth," the Smithsonian National Air and Space Museum explained in 2018.

The ballot is then sent to the county clerk for tabulation.

Basically they're securely emailed their ballot. They fill it out. Securely email it back. Then someone at NASA delivers it to the county clerk.

American astronauts have been able to cast ballots from above for over two decades now, ever since a Texas lawmaker learned that astronaut John Blaha couldn't vote in the 1996 presidential race between President Bill Clinton and Bob Dole. At the time, Blaha was serving on Russia's Mir Space Station, a predecessor to the ISS.

This article about Astronaut Drew Morgan voting from the ISS gives more detail about how Lawrence County, Pennsylvania handled it.

[Ed Allison, director of Lawrence County’s Department of Voter Services] then pulled his team together, consisting of Rick DiBello, the county’s Director of IT who would handle setting up a secure email and password, and Tim Germani, the man responsible for creating the ballots.

DiBello created a fillable PDF file that when Morgan received it all he would have to do is click the circle next to the name of the person for whom he wanted to cast a vote.

Allison said the ballot was shipped in two separate emails — one containing the ballot and one with a secured password that only Morgan would possess in order for him to cast his vote.

“Astronaut Morgan got the ballot, voted it and sent it back. That part was seamless. No problem at all.”

“It is a secret ballot,” Allison said. “No one will ever know what it was. Because it looks different from the rest - you would know it is a fillable ballot. It is going to go in the box and it is going to be destroyed just like all the other ones will be destroyed in time in order to entitle him to that secrecy he is entitled to.

As explained in video description of https://www.youtube.com/watch?v=9Emsf_udovU the voting is done electronically

Most U.S. astronauts live in Houston. Texas law allows them to vote from space using a secure electronic ballot. Mission Control forwards the ballot to the space station and relays the completed ballot back to the county clerk.

Not the answer you're looking for? Browse other questions tagged iss nasa astronaut-lifestyle united-states international-politics or ask your own question.

13
is it possible to use mechanical pencil instead of space pen in ISS?
21
Does NASA address libido of astronauts that are in space for prolonged periods of time?
6
How well could the ISS attitude control system detect periods of astronaut activity?
16
Do ISS astronauts notice, or experience symptoms of elevated CO2 levels? Do they wear monitors regularly?
11
What is Astronaut Sunita Williams wearing on their wrist?
1
How will the Gateway-before-boots sequence benefit US business, economic and technological development?
71
Which country borders are visible from space?
15
How do astronauts keep their devices dry?