How does MEV use its "ion thruster on a stick" technology?

I was reading Politico's Biden’s space policy: One giant leap for climate change and some algorithm embedded a "Learn more about MEV; Northrop Grumman" advertisement in the story. (screenshot of advertisement; I have no affiliation whatsoever)

The video below shows a cool activity! A communications satellite in GEO moves itself to GEO Graveyard and MEV rendezvous with it, inspects it at a distance, matches the orbit, moves 1 meter away, and then docks using the original satellite's engine and bell.

But what bothers me is the placement of MEV's ion engines on long articulated "sticks" extending far away from the spacecraft's center of mass seeming to invite unwanted torque and vibration issues, and yet an articulated electric thruster might also provide some really handy advantages!

Question: How does MEV use its "ion thruster on a stick" technology? What are the advantages of and technical challenges to putting them out there rather than mounting them on the body of the spacecraft? 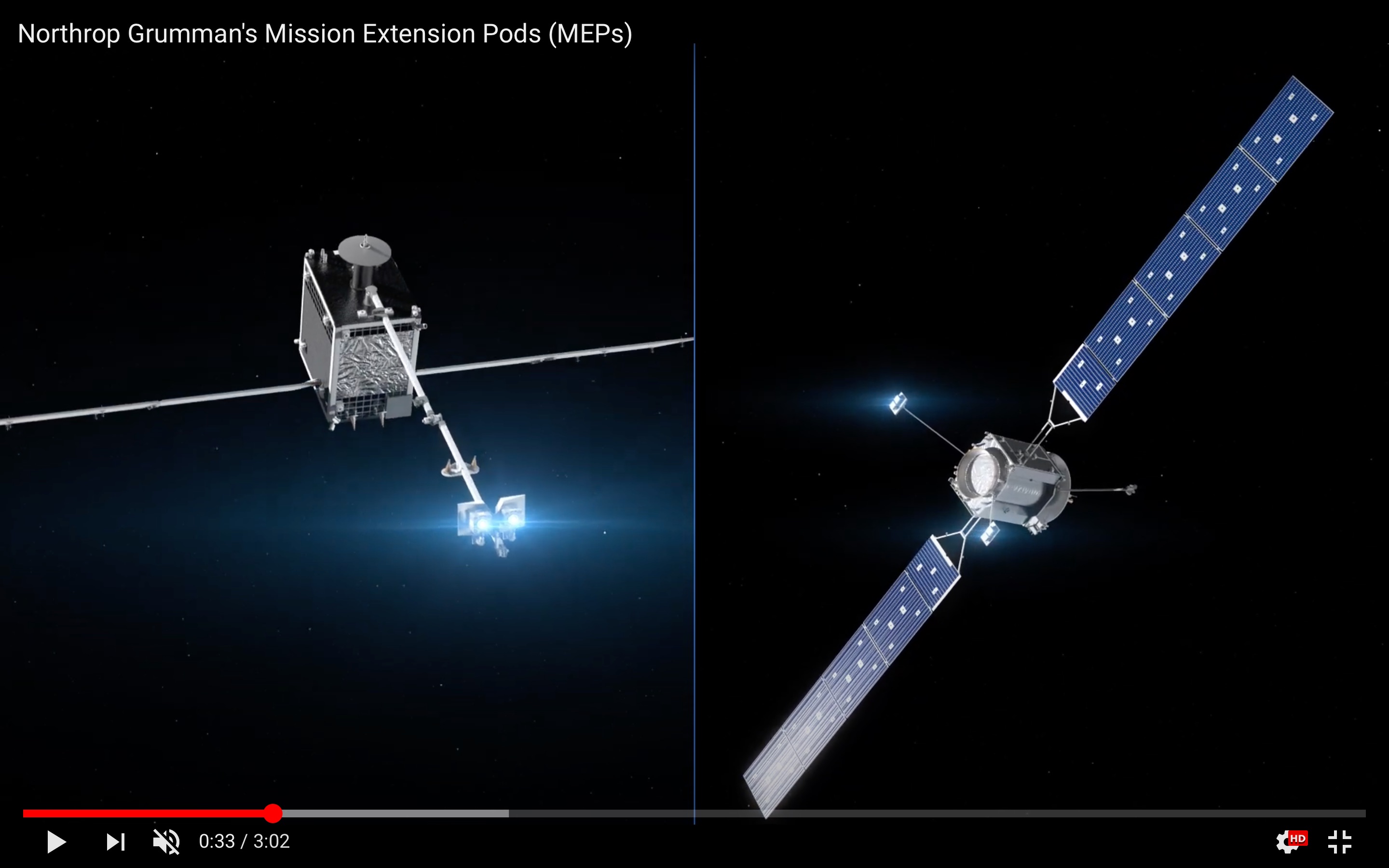 I suspect that what you suspect is the problem is actually the answer. MEV is intended to dock with spacecraft that were not intended to dock with, and control the orientation of those spacecraft. Therefore, there are a number of situations that it has to deal with, where the center of mass will be different. It has to control that center of mass when it is flying on its own, as well as when docked with arbitrary spacecraft. Having the point of thrust so far out will allow for one to adjust how it is pointed, allowing it to point through the center of mass depending on the spacecraft it is docked with.

Ion thrust is low enough that vibrations and the like aren't likely to cause a significant issue, but long term pointing from off the center of gravity can in fact have a major issue.

It will involve running plumbing over a longer distance, but as ion engines don't have the temperature concerns, it shouldn't be a huge problem. Overall it seems like a fairly simple solution to a potentially complex problem.

If the MEV could adjust orientation traditionally, with reaction wheels, then no advantage is gained by applying thrust in a line that doesn't pass near the craft's center of mass. But as far as I can tell, the MEV eschews reaction wheels because its mission is to repair satellites whose wheels have failed. Even if the failed ones are decades older, management may be leery of the embarrassment of getting the tow truck itself stranded for the same reason. So reduce the parts count.

So use the primary thrusters for docking maneuvers too. That isn't efficient, but ion thrusters have good $I_{sp}$, and their low thrust makes them less of a concern "on a stick."

I'd guessed incorrectly. A description of the MEV-1 includes reaction wheels. Maybe that description, more than a mere press release, can guide someone to a better explanation.

Merely as a second unattributed guess: the thrusters are that far outboard to clear the connected satellite. At least when the MEV undocks, they'd have to point at the satellite.

Not the answer you're looking for? Browse other questions tagged orbital-maneuver ion-thruster thrust-vectoring business in-space-repairs or ask your own question.

5
Thrust vectoring for ion propulsion - any plans or current research?