Does it make any scientific sense that a comet coming to crush Earth would appear "sideways" from a telescope and on the sky (from Earth)? [closed]

This question is about other space sciences (physics, weather, astronomy, etc), and does not directly pertain to space exploration as outlined in the help center.

In multiple different movies and fiction, there's the threat of a burning space comet heading for Earth, threatening to kill everyone and destroy the planet.

One example is the animated Comet in Moominland (1992).

When they look at it in a telescope, and later it's seen on the sky, it's depicted as a burning ball with a trail, seemingly going sideways, to the right, past Earth. If it were heading toward Earth, wouldn't it have no visible "tail", but simply be a big round burning ball which gets increasingly bigger?

Am I fundamentally missing something here? Why do they so often depict it appearing "sideways" rather than "frontways"? Would a comet heading straight to Earth ever appear to be going past Earth, or for some reason have a trail/tail to the left of the big burning sphere, even though it's coming for us?

The comet's tail always points away from the Sun. Yes, even when the comet is heading back into the outer solar system.

This is because the tail isn't a 'trail' of where the comet has been, like a rocket exhaust or contrail, but instead it's gas, ice and other debris blown off by the stellar wind.

(There's actually two tails, one made of charged particles, and one of neutral dust, but that's not especially relevant to the question)

You can see the tail behaviour clearly in the image below. 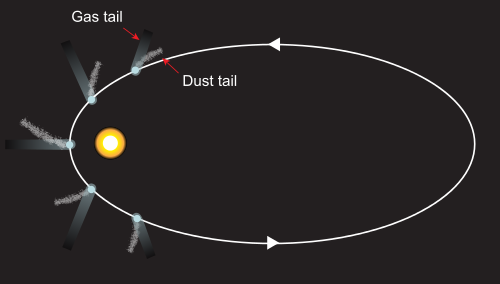 So yes, while movies about comets are often notoriously inaccurate, you can indeed have a comet coming toward earth with a tail pointed sideways. But, I suspect accuracy is not why they depict the comet with a sideways tail in movies. A front-end comet will not be nearly as recognisable to viewers as a sideways one.

While those movies probably do it because that's how comets are commonly depicted, it might not be that inaccurate. Remember that the Earth itself is moving around the Sun, so if a comet is heading for Earth, that means it's heading for a point where Earth will eventually be, not where it currently is. It would therefore be possible to see such a comet be "sideways".

If you're the comet, the way to hit Earth is not to head directly for it. That's because Earth is orbiting the sun: you need to aim at where Earth will be, not where it is right now.

This shows a transfer orbit from Earth (blue) to Mars (green), but the basics of orbital mechanics are the same for a comet. Just imagine the probe (purple) is the comet, on a trajectory to collide with Earth (green).

As you can see, the comet isn't headed "right at" Earth. Rather it's mostly headed in the same direction as Earth, which is a counter-clockwise rotation in this image. If you could somehow see the path the comet is traveling from Earth, it would not be behind the comet, but to the side.

But also, the trail of a comet does not leave debris in its path. Burning/smoking/vaporizing things do this on Earth because as the gas/small particulates/whatever is being blown off by the air as the object flies through Earth's atmosphere. Since the apparent direction of this wind is behind the direction of travel of the object, the trail traces out a path of where the object has been.

But in space there is no atmosphere, and so the "wind" blowing stuff off the comet is not related to the comet's direction of travel. Instead, the wind is always coming from the sun. Consequently, the tail is predominately away from the sun, regardless of which way the comet is traveling.

Not the answer you're looking for? Browse other questions tagged physics earth telescope comet optical or ask your own question.

17
How hard is it to fly through the tail of a comet? Has it been done?
13
Armageddon in NASA training