Do aeroshells really get hotter than the surface of the sun? 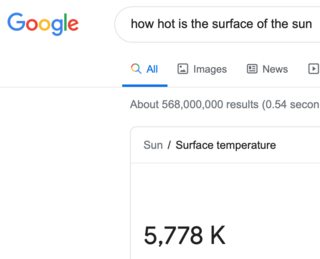 This answer to How to design heatshield bluntness? says:

Curiosity reentry dumped about 98% of its entry energy into the atmosphere, the aeroshell can still get to be temps greater than the surface of the sun.

Of course the surface of the Sun is a bit ambiguous and the temperature of the photosphere varies by 1000 K every 70 kilometers, the technical definition of the surface is usually the point at which the visible light opacity reaches 2/3, (see What is the density profile within the Sun's photosphere? Which one of these is wrong?) but since we're talking about "white hot" things we can use something like the best fit to the Sun's spectrum or it's effective color temperature of almost 5,800 K.

That's pretty close to the temperature near the Sun's photosphere as it should be.

Question: Are there really parts of the aeroshell that get this hot? Or is that the temperature of the gas or plasma nearby?

Computations show that a material made with just the right amounts of hafnium, nitrogen, and carbon would have a melting point of more than 4400 K (7460°F). That's about two-thirds the temperature at the surface of the sun and 200 K higher than the highest melting point ever recorded experimentally.

As such, the surface material does not reach solar temperatures.

Question: Are there really parts of the aeroshell that get this hot? Or is that the temperature of the gas or plasma nearby?

The later then, it is.

Not the answer you're looking for? Browse other questions tagged reentry curiosity thermal heat-shield mars-science-laboratory or ask your own question.

15
What are the top temperatures occurring during reentry?
3
Collect Helium-3 in the space (not surfaces)
2
How to design heatshield bluntness?

9
How does the surface area of a heat shield impact the ideal angle of attack for reentry?
4
What are the problems with using the sun for Oberth maneuvers?
1
What thermal effect does the Sun have on spacecraft that are roughly the same distance from the sun as the earth is?
16
Why will the BFS reenter broadside rather than engine first?
5
What is the material and reflectivity of the surface of Parker Solar Probe's heat shield that faces the Sun?
23
Why not increase contact surface when reentering the atmosphere?
0
View the surface of Mars via Hubble
5
If a Space Shuttle tile deorbited on its own, what percentage of it's mass if any would remain in one piece until it reached the surface of the earth?
3
Does curiosity's RTG generate neutrons as this NASA CheMin X-ray detection system webpage suggests? If so, how?