During an Apollo mission, were separations after dropping the S-II considered as staging events?

I would like to clarify what is a staging event. Maybe there is no definite definition. First I though it was easy as the Nasa definition is clear. Then I though of the stage-and-a-half Atlas SLV-3, and the Space shuttle for which one separation event consists in only dropping a tank.

Then, I thought of Apollo missions. A typical Apollo mission involved many separation events, some of which can clearly be qualified as staging, but what about the others?

Here is a quick list of the separation events:

During a typical Apollo mission, what separation events were considered as staging?

I don't believe the events after dropping the S-II are generally referred to as staging, but I think at least the S-IVB/CSM separation event could be considered staging.

Separation of S-IVB on one hand, the LM+CSM on the other hand. Not clear if this is considered as a staging event.

While not usually thought of as staging, the "transposition, docking, and extraction" maneuver separating the S-IVB from the CSM/LM satisfies the basic definitions of a staging event. An expended lower stage (the S-IVB) is separating from a fully fueled stage (the CSM) which will go on to make propulsive maneuvers later (mid-course corrections, lunar orbit insertion, and so on). The post-staging coast phase is unusually long, but that's an arbitrary distinction; the CSM is usually referred to as a spacecraft rather than a stage, but that's also arbitrary. The S-IVB did some maneuvering after separation to meet its eventual fate, but that's not unique (consider the Falcon 9 first stage). The separation is more complex, and gentler, than other staging events, but that doesn't seem particularly definitive to me. I can't think of anything that is fundamentally different between this and other staging events.

Separation of LM and CSM in lunar orbit. I don't think this is a staging event, but I'm not quite sure.

The most obvious distinction to me from "staging" is that the CSM is not discarded, and the LM will eventually return to the CSM. I've always seen this described as "separation" or "undocking", never as "staging".

separation of ascent and descent stage for the LM. I don't think this is a staging event as the tank and engines of the descent stage play no role during this launch.

This was, in fact, referred to as staging during the Apollo program. While the normal mission plan had the descent stage resting gently on the lunar surface when the ascent stage separated and fired, an abort from low altitude on the landing descent would look much like any other staging event. On the LM control panel were two prominent buttons: ABORT and ABORT STAGE. The ABORT button would abort the landing and return to safe lunar orbit using the descent engine; ABORT STAGE would shut off the descent engine, separate the two stages, and fire the ascent engine to return to orbit. 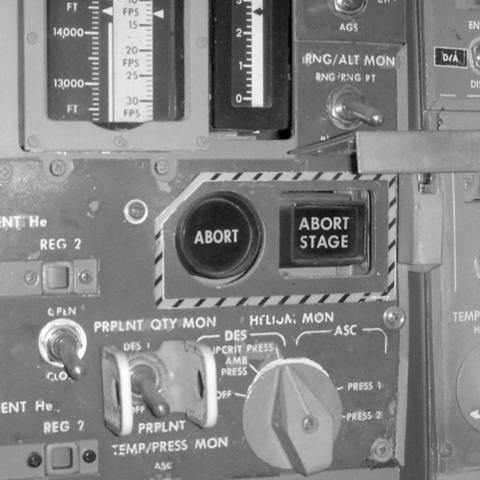 separation of LM and CSM. I don't think this is staging event.

This is just referred to as a jettison. The distinction I see from staging is that the LM is discarded, but at no point was the LM engine pushing the entire stack (except on Apollo 13!).

separation of CM and SM just before reentry. I've never heard staging for separation of reentry vehicle, yet the CM let behind a stage with empty propellant tank and a rocket engine and it looks like a serial staging.

The usual purpose of staging is to discard mass so that a following burn can be more mass-efficient, which isn't relevant to the CSM/LM separation, so it makes sense to me to classify it as a jettison rather than a staging.

Looking at for instance the list of events for Apollo 11, there are no "staging events", just a number of "separations".

On the other hand, if we are counting everything with a "stage" in the name, there are a total of five stages, three on the Saturn V and two on the lunar module.

The staging page you linked does not go much farther than explaining that staging is getting rid of spent hardware to save having to carry the dead weight for further velocity changes. That leads to at least two reasonable interpretations:

1. Several parts contributing to the same manoeuvre, with one being discarded before the manoeuvre is complete.

Under this interpretation, only the S-IC and S-II separation events are staging events.

Not the answer you're looking for? Browse other questions tagged apollo-program terminology saturn-v stage-separation or ask your own question.

21
Where were the various Apollo Lunar Modules (LMs) discarded?
40
If the Apollo mandate were delivered today, would the mission vehicle(s) and profile be similar?
36
How did the Apollo 11's Eagle ascent stage find the CSM after leaving the Moon?
13
What were the differences on the LM ascent stage engines on Apollo 9, 10, and 11?
8
Could the Apollo LM abort mode be engaged after touchdown? What would have happened if it was?
20
What happened to Apollo 13 LM descent stage?
14
Why was the Saturn V considered to be human-rated after Apollo 6?
1
When is a rocket a rocket?
4
Was LM1 of Apollo 5 equipped with additional sensors and telemetry for the umanned "fire in the hole" test?
4
Did any Apollo missions have enough fuel left to bring back the LM ascent stage?