Can the grid fins affect the rotation of the Falcon 9 descent?

Can the grid fins control the rotation of the Falcon 9 on descent?

How would they have to be positioned to stop the rotation?

If used to rotate the ship, then how they would they have to be positioned and how fast can they spin the first stage, limited of course by the descent time?

Yes, the grid fins can control the rotation of the stage -- and they're the primary mechanism for that during descent, since the cold-gas thrusters have little force and the engines are shut down for most of the time.

To keep the stage stable, the fins are left horizontal, and adjusted by small amounts to correct for other sources of rotation.

To spin the stage, all the fins are tilted in the same direction relative to their mounting point, so that opposing pairs are producing a horizontal force in opposite directions.

SpaceX accidentally tested your last question on the CRS-16 mission -- all the fins got stuck near the limit stop due to a hydraulic problem. The answer is: quite fast! 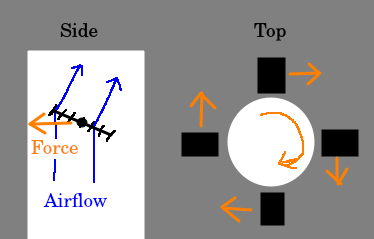 Not the answer you're looking for? Browse other questions tagged spacex falcon-9 landing flight-control grid-fins or ask your own question.

7
How long does the F9 first stage remain hypersonic under control of its grid fins?
9
Why doesn't the Falcon 9 booster use rigid air brakes during landing attempts?
15
How effective are Falcon 9 1st stage grid fins in the last few seconds before landing?
3
What's behind the design of SpaceX grid fins?
4
How do the F9 grid fins extend and rotate?
19
On the Falcon Heavy, why are the side boosters using Ti Grid fins, but not the center core?
4
Could SpaceX's grid fins be controlled by electric motors instead of hydraulics?
5
Will the New Glenn have grid fins? Why or why not?
2
What is producing these strange lights around the Falcon 9 grid fins (Starlink launch)?
10
Falcon 9 second stage roll control: fins or dracos?