Is the Ceres-1 the first Chinese rocket that was given an official Romanized name?

At present, Galactic Energy’s research and development team have more than 100 employees, and 90 percent of the staff have more than five years’ working experience in the spaceflight industry.

Transliteration from Chinese Pinyin to English or other Romanized forms is ambiguous; many Chinese characters can have the same sound, and Pinyin without the tone "ambiguifies" by an additional factor of four per character (syllable) , so while one (not me!) might be able to guess what Gu Shen Xing might be, it's impossible to be certain. (4 x 4 x 4 = 64)

In other words, you can't type pinyin like "Gu Shen Xing" or "Gushenxing" into a search engine or translator and expect to find the correct Chinese. It might try to guess, but it's a one-to-many mapping.

In other words, having an additional Romanized name using an alphabet instead of romanized equivalent is probably extremely helpful for a rocket looking for international customers.

note: "Given an official Chinese name" would be by the rocket's owners or producers or by some official Chinese government body. Romanized names assigned by foreign organizations for their own use and convenience don't count for the purposes of this question. 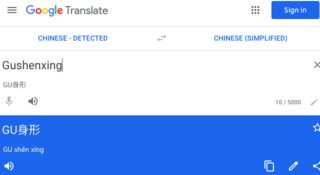 says Britannica. They were intended for export, a plausible reason for its builders to take the initiative of translating its Chinese name to one more familiar to their markets.

Not the answer you're looking for? Browse other questions tagged terminology launch-vehicle spaceflight-firsts china cnsa or ask your own question.

23
Is true that Armstrong was not designated as first to walk on the moon?
10
What was the first rocket to use gimbaled thrust?
7
What was the first large rocket to use APCP solid fuel?
18
Was Jules Verne the first to propose the retro-rocket concept?
5
When was the first strap-on booster used in spaceflight?
26
When was it publicly revealed that a KH-11 spy satellite took pictures of the first Shuttle flight?
4
Was there a spacecraft that was clearly the first to be put in a polar orbit?
2
When was liquid hydrogen used for the first time in rocket engines?
3
What is or are the official English names for the eventual space station being built by China, and of the first module that's in orbit now?