How can the gravitational force of Bennu (being so weak) hold the spacecraft in orbit?

Escape velocity depends on both distance and the mass of the body:

Where $G$ is the universal gravitational constant, $M$ is the mass of the asteroid, and $r$ is the distance between the centre of the asteroid and the spacecraft.

Another consideration is that when far away enough from Bennu, the spacecraft will tend to orbit the Sun instead of the asteroid. A first order approximation for when it's close enough for orbits to be stable is the Hill sphere:

Where $a_{bennu}$ is the semi-major axis of the asteroids orbit. This works out to a stable region of about 40km. This is a somewhat fuzzy limit as "stable" depends on the timescale you are looking at.

Along with escape velocity and sphere of influence considerations, one also needs to account for solar radiation pressure and the body's gravity field when analyzing orbital mechanics around small bodies. 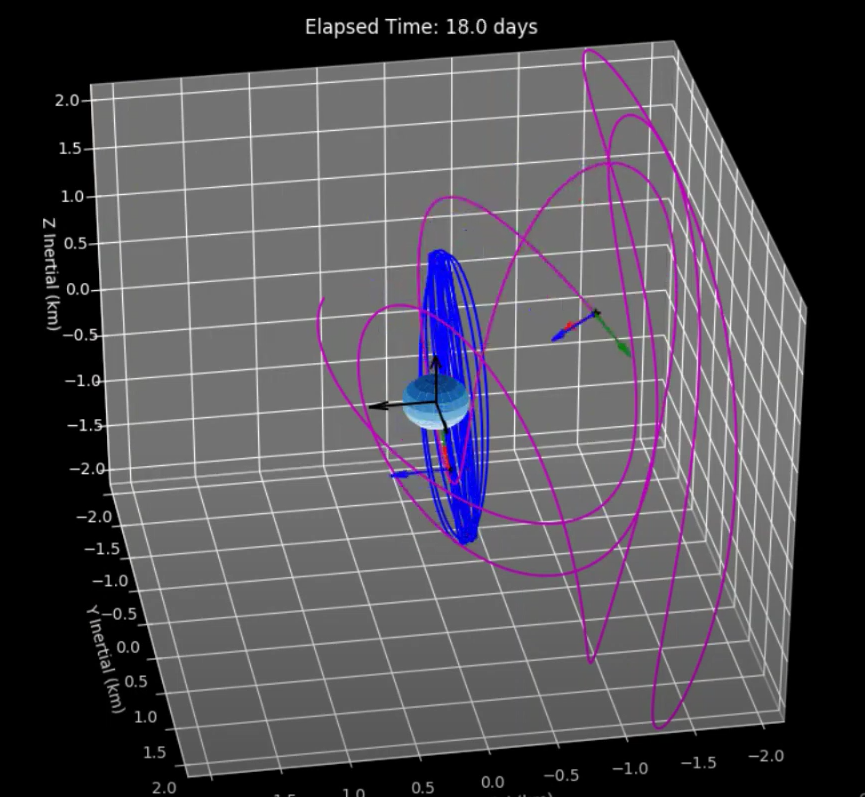 Due to the relatively large ratio of magnitude of solar radiation pressure acceleration vs. gravity (since the gravity is so small), the only ~stable orbits around these bodies are terminator orbits. A terminator line on a body is the line separating light from dark on the surface (due to incident sunlight), so a terminator orbit is aligned orbits above that line. Another way to describe it is that the angular momentum vector of the orbit is either aligned with the sun vector or 180 degrees away (pointing in the exact opposite direction). In the plot, the blue is a terminator orbit, where the sun is in the positive x direction. The purple is another spacecraft who had the same initial magnitude of velocity but a different inclination, thus is wildly perturbed by solar radiation pressure in this orbit. I chose a border line inclination and semi-major axis to get this chaotic motion, but only another few degrees on inclination would make it escape within 2-3 orbits

When accounting for solar radiation pressure, there is a limit to the semi-major axis of the orbit, which is also a function of the inclination. This also means that you don't need to have escape velocity to actually escape, you can also be "blown away" by the solar wind.

D.J. Scheeres has a great paper on this analysis, called Orbital Mechanics about Small Asteroids: https://www.researchgate.net/publication/265973243_Orbit_mechanics_about_small_asteroids

Not the answer you're looking for? Browse other questions tagged orbital-mechanics gravity asteroid bennu or ask your own question.

19
How deep is the force well of L4 and L5 Lagrangian Points of Earth-Sun set?
15
Why paint only one-half of Bennu?
2
How much will Bennu rotate faster and faster with mirrors facing the Sun on its left side?
2
How low does OSIRIS REx's record-setting orbiting around Bennu go?
2
What is the gravitational acceleration of the Sun?
2
Could ejecta from asteroid Bennu enter into temporary orbit around it? If so, how?
2
Are the estimated chances of Bennu hitting Earth in the next 200 years still about “1 in 1410” now that OSIRIS REx has scanned it?
4
Will mining water on Bennu not be more economical than collecting it at the lunar south pole?