How do we maintain the RPM of turbo pumps in liquid rocket engine?

How do we maintain the RPM of turbo pumps in liquid rocket engine? And how do we control it? And in the case of electric pump fed engine (like Rocket Labs's Rutherford engine) is easy but how we do it for other liquid propellant engines?

Your question is very general, so a general answer is that, a valve or valves control the flow of propellants to the turbine that drives the pump. An engine controller determines the proper valve setting based on sensor readings from the engine.

For the case of the Space Shuttle Main Engine

During the engine run phase, the MOV, MFV, and CCV are switched to run schedules, while the OPOV and FPOV are switched to closed-loop operations. The run schedules for the MOV and MFV cause them to simply remain fully open, whereas the run schedule for the CCV drives it between half open at 67 percent thrust (MPL) and fully open at 100 percent thrust (and above). This action maintains the appropriate flow relationships among the several parallel fuel flow paths as the HPFTP output pressure varies with thrust. During engine run, the OPOV and FPOV are used as control devices for thrust and mixture ratio. Manipulating these valves affects the output of the preburners, the speed of the turbopumps, and, therefore, the propellant flowrates. The FPOV is driven alone to maintain mixture ratio in the MCC, while the OPOV is driven with the FPOV to increase or decrease thrust while maintaining the mixture ratio. The control loops include the controller, the valve actuators, and the transducers that sense flowrates and MCC pressure; i.e., thrust. 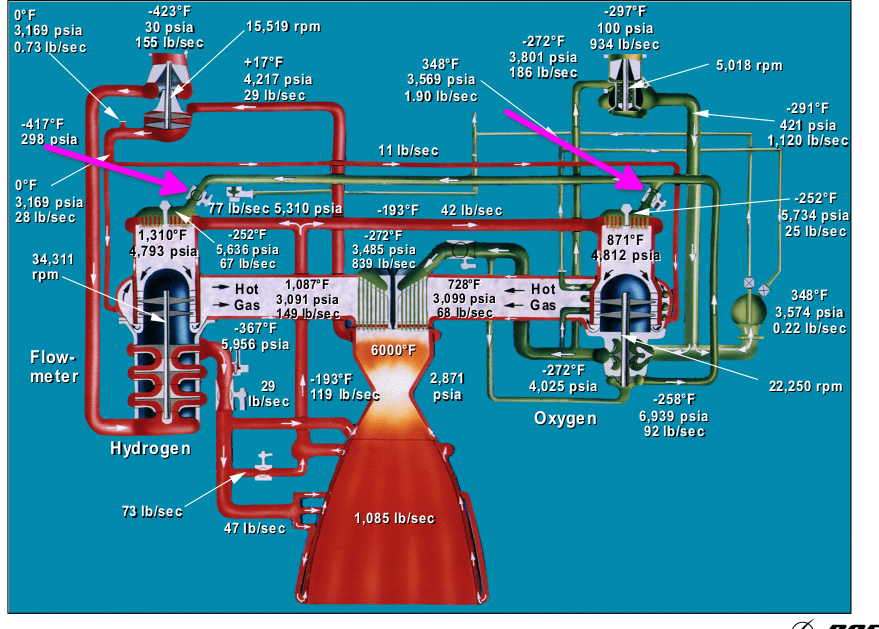 Everything from SSME Intro, figure annotations and emphasis mine

Not the answer you're looking for? Browse other questions tagged rockets engines engine-design turbopump rutherford-engine or ask your own question.