Why is the tip of this Russian ICBM folding/closing during launch?

This question refers to the page on which a YouTube video Soviet Missile SS-18 Satan / Most Powerful Rocket is shown. Screenshots below are from circa 01:10 for example and for those who can view it there are other launch sequences in this clip as well.

Can anyone explain why does the nose cone of this Soviet Missile SS-18 Satan ballistic missile fold when the ICBM is launched?

What is the reason for this? 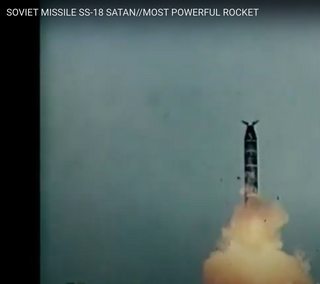 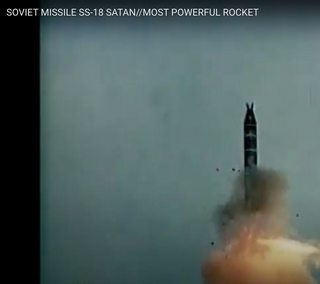 From the explanation under the video:

The R-36 (Russian: Р-36) is a family of intercontinental ballistic missiles (ICBMs) and space launch vehicles (Tsyklon) designed by the Soviet Union during the Cold War. The original R-36 was deployed under the GRAU index 8K67 and was given the NATO reporting name SS-9 Scarp. It was able to carry three warheads and was the first Soviet MIRV (multiple independently targetable reentry vehicle) missile. The later version, the R-36M was produced under the GRAU designations 15A14 and 15A18 and was given the NATO reporting name SS-18 Satan. This missile was viewed by certain United States analysts as giving the Soviet Union first strike advantage over the U.S., particularly because of its rapid silo-reload ability, very heavy throw weight and extremely large number of re-entry vehicles. Some versions of the R-36M were deployed with 10 warheads and up to 40 penetration aids and the missile's high throw-weight made it theoretically capable of carrying more warheads or penetration aids. Contemporary U.S. missiles, such as the Minuteman III, carried up to three warheads at most.

The R36 became the base for the Tsyklon launch vehicles family. As of early 2018, Cyclone-4M, the last modification of it, is developed and planned for launch in 2020.

Russia intends to replace the R-36M with a new heavy ICBM, the RS-28 Sarmat.

I believe that these are actually screenshots of another rocket RT-23 Molodets (NATO reporting name: SS-24 Scalpel).. The same folding nose cone exists at 1:13 of YouTube video dedicated to SS-24.

SS-24 was a railway launch system. The length of rocket was greater than the length of railway wagon. In order to accommodate rocket inside wagon they designed two variants, one with inflatable nose cone, second more robust version with folding nose cone.

More data regarding the reasons why all this happen you can find on this page.

13
What eventually killed the Augustine Commission Report Option 4B, Directly Shuttle-Derived Heavy-Lift Launch Vehicle, a.k.a. DIRECT?
17
Why is the Russian approach to the aerodynamics of their rockets different?
5
How to decide if the rocket most recently tested by North Korean is classified as long-range or medium-range launch?
8
Have there been any other cheap, modular launcher designs like the OTRAG?
3
What is that strange light ball appearing during launch of Russian Burevestnik nuclear-powered cruised missile?
11
Why aren’t rocket stages modular and interchangeable?
12
Has USSR/Russia launched humans on any rocket not derived from R-7?
16
Why are there advertisements in the Russian ISS flight control room?
4
Besides the video game and Nine Inch Nails box set, what is HALO-IV? How does it relate to the testing of ICBM interceptors?