Under what conditions can a non-resonant satellite stay hidden from an observer on the ground?

Such orbits clearly exist. The easiest example is a satellite in geostationary orbit, which will never be visible from the antipode of the stationary foot point.

However, geostationary and geosynchronous orbits are resonant orbits with an orbital period with a 1:1 resonance to the rotation of the Earth. In the grand scheme of things, such simple fractions are a special case.

An alternate and equivalent formulation is to find orbits such that a satellite can be located anywhere in it and still stay below the horizon all the time.

What are the constraints of such orbits?

This is a case of an answer originating before a question. Originally a spin-off problem from this question asking about satellite footprints, it doesn't fit very well as an answer there. Hence this separate question and answer.

As it turns out, this has a straightforward geometric solution from observer latitude $\phi$ and inclination $i$: 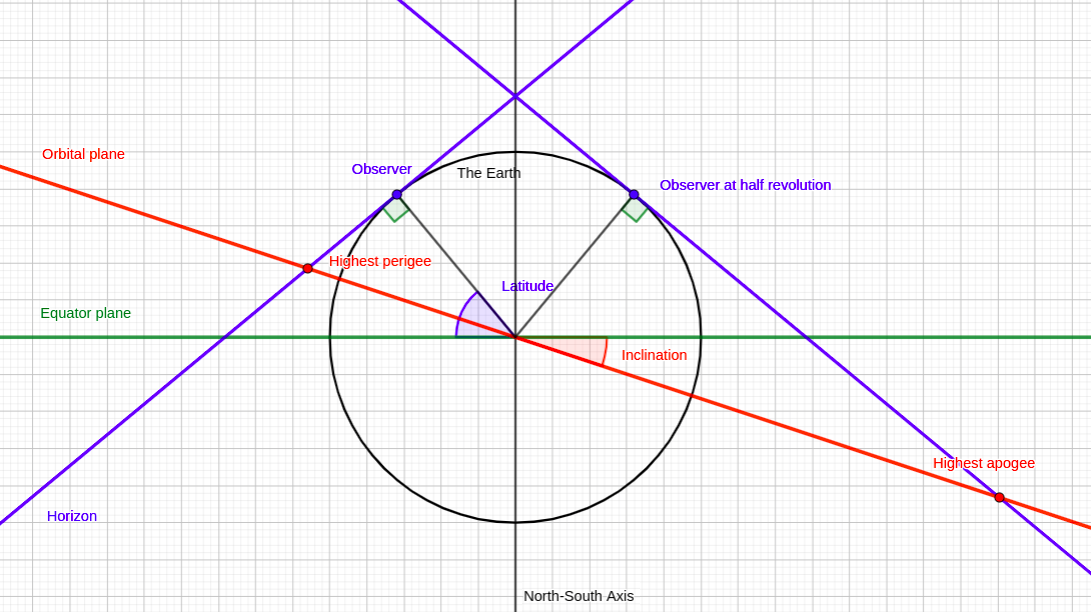 Alternate view, showing the tight squeeze when the observer is at low latitude: 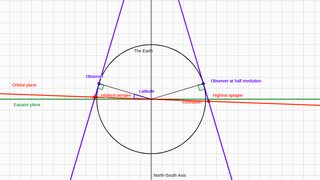 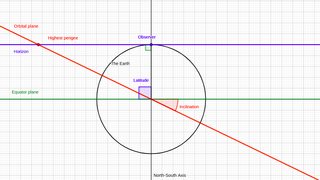 Not the answer you're looking for? Browse other questions tagged orbital-mechanics orbital-elements observation or ask your own question.

4
Are there terms for Earth orbits with rational number multiples of 1 sidereal day?
3
Are Jool's moons' orbits stable?
3
Is Dawn's upcoming low periapsis orbit for XMO7 “resonant”?
2
Is it possible to predict if an orbiting satellite will pass over a given point on Earth after n periods?

10
How much “wobble” does a typical geostationary satellite experience?
4
What (actually) is a 1:1 resonance, and is 2016 HO3 in one with the Earth?
4
Are there terms for Earth orbits with rational number multiples of 1 sidereal day?
25
SpaceX's 4,425 satellite constellation - what's the method to the madness?
7
How stationary is geostationary?
6
Difference between Tundra and Molniya orbits?
7
TESS orbit and moon resonance
3
Is Dawn's upcoming low periapsis orbit for XMO7 “resonant”?
9
Does the “17” really mean anything with respect to GNSS orbits being rational factions of a sidereal day?
2
What are the shortest orbital periods used for their repeat ground track properties?