What happens to where umbilical lines are connected when a rocket lifts off?

I've read about umbilical lines in rockets but I don't understand what happens with the places where each umbilical is connected to the rocket once it lifts off. I guess they are sealed in some way in order to prevent any damage to those connections and for example loss of propellant during the flight.

How are these connections closed or sealed?

The fluid lines are separated by "quick disconnects". Here is some information on them from that paper.

Quick disconnects (QD) provide fluid servicing either directly to the vehicle or to a mobile facility. Considerable effort has been made in developing QDs for various types of applications [15]. They can range from sizes of 1⁄4 in. to 8 in. and can be of the latching or non-latching type. Generally non-latching QDs are used for application where separate locking mechanisms are used for mating umbilical plates together. Figure 18 shows a bellows type QD that uses the bellows preload and pressure for sealing a spherical mating surface. The bellows is a special formed section that acts as a spring. These types of QDs are typically used for T-0 umiblicals to minimize alignment issues during disconnect. Additionally, they may have poppets spring loaded on the groundside and/or flight side to isolate systems after separation. A single ground side poppet is shown.

A second type of QD uses a slip on design where seals are used between the circumferential surfaces (Figure 19). This type of design minimizes QD interface loads from pressure and preloads but requires a longer engagement.

(added emphasis on poppets that seal the connector after separation)

As mentioned above, poppet valves are typically used to shut off the fluid lines after disconnection. More rarely, ball valves are used. 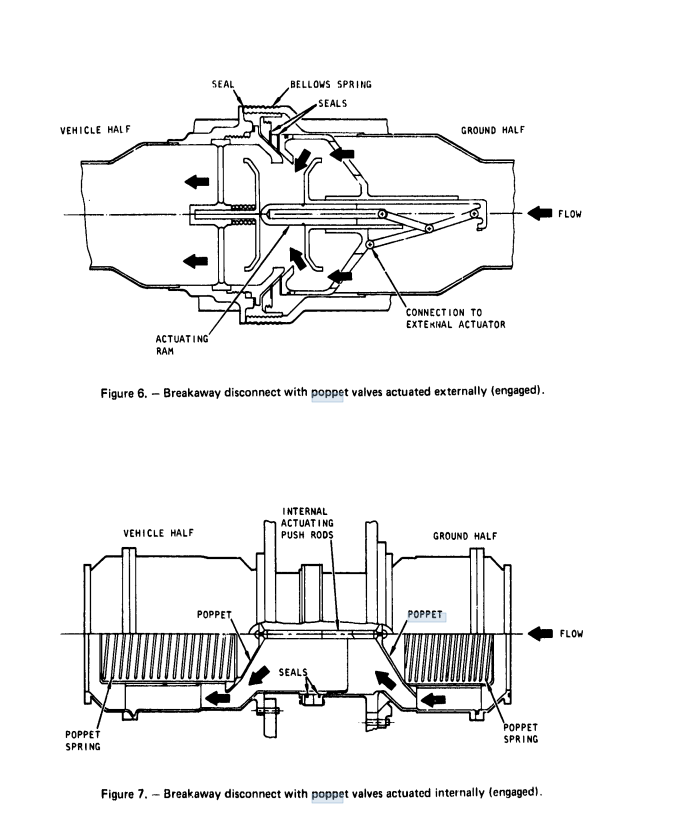 Not the answer you're looking for? Browse other questions tagged rockets launch or ask your own question.

6
How are umbilical connectors held in place until their intended detachment?

9
Quite some lateral wobble immediately following Antares Orb-2 liftoff. Is that normal?
7
If a rocket launch is delayed, what happens to the cryogenics?
9
If a rocket launched due East from a high latitude, what happens to its path?
6
Which part(s) of the Goddard Rocket is(are) the rocket, and why (actually) no fins?
11
What happens next if the root cause of one rocket failure won't be identified?
8
What happens to rocket stages that land in the oceans, and how many are still there?
3
What are the historical fastest and longest time between take off and orbit insertion?
22
If rocket engines only need fuel and oxidizer, then why there are so many pipe lines on the engines?