Are crewed spacecraft missions that appear stationary from the ground possible?

I've looked at https://en.wikipedia.org/wiki/Spacecraft and the following question arose.

For crewed spacecraft missions, can a spacecraft remain stationary in the sky i.e. not moving once launched and deployed, more similar in appearance to a helicopter rather than that of an aeroplane?

If possible but unlikely due to technical challenges, what would those challenges be?

To be stationary above ground we need an orbit with a period of about 24 hours ( exactly 23 hours, 56 minutes and 4 seconds, one sideral day). Such an orbit is called GEO and is 35,786 km above ground). Many communication and TV satellites are placed into a GEO orbit.

We have rockets for the transfer of astronauts to the ISS into a LEO orbit. But we don't have rockets powerful enough to transfer humans into a GEO orbit.

A Falcon 9 may lift a payload of

A GTO is a elliptical orbit with 35,786 km maximum distance to Earth but only some hundred km minimum distance to the surface. A communication satellite placed in a GTO needs its own engine and some fuel for the transfer to GEO.

About 40 % of payload, that would require a much bigger rocket for a manned capsule to a GEO orbit.

But we need a capsule capable to transfer from GTO to GEO and for return to Earth back from GEO to a special GTO with reentry to the atmosphere. So this capsule needs much more fuel for the transfers to and from GEO. For a reentry from a GTO instead of a LEO, the capsule needs a thicker and heavier heatshield. So this capsule would be much heavier than a capsule designed for LEO.

There is an issue with geosync orbit: You are in the outer Van Allen radiation belt. Oodles of relativistic electrons running around. Your space craft has to be shielded against those. If you parked at geosync orbit, then you'd receive about 25 Sieverts of radiation per year -- about 5 times lethal dose. Even that requries a 3 mm protective shell.

Solar flare activity is another problem in higher orbits.

Overall: Not a place to linger.

Once we can harvest lunar or asteroid mass for shelters then high orbits can become safer.

For an object in orbit to remain at the same position relative to a point on the ground, it needs to be in geostationary orbit, i.e. at an altitude of 35,786 km, and directly over the equator.

That orbit is quite densely occupied by a large number of satellites, so they would have to find an available spot.

That orbit is also a much higher orbit that that used for the usual manned missions, which are all in Low Earth Orbits, about a hundred times closer to Earth. Getting there requires a higher delta-v budget, about 40% more than for LEO, so a much bigger rocket (to get more delta-v you need more fuel so the rocket is heavier so you need more fuel so...).

The delta-v requirements are similar to those to get to Lunar Orbit, so you know it’s definitely possible. We no longer have the mighty Saturn V which took astronauts to the Moon, but see Edit #2 below for alternatives.

The question is then: what would be the purpose of such a mission?

To clarify, a spacecraft in another orbit cannot just "stop" and remain above the same spot on the ground. For each altitude, there is a speed to be maintained, which is just the right balance between inertia (which would make the spacecraft continue in a straight line and move away from Earth) and gravity (which tries to pull the spacecraft down towards the Earth).

If the spacecraft slows down, the balance is altered, and gravity will slowly pull down the spacecraft towards Earth. It's all very well illustrated by Newton's Cannonball: 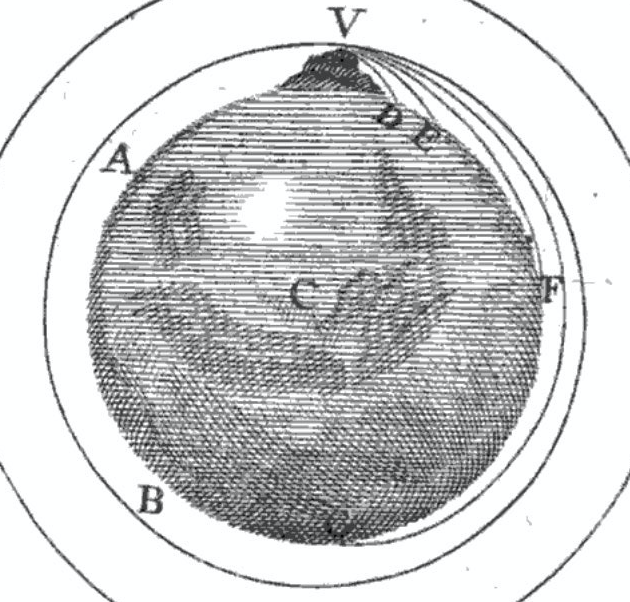 Geostationary orbit is just the orbit where that speed matches the rotation of the Earth.

A small capsule for a short mission like the Gemini capsule weighed less than 4000 kg. The Atlas V 551 is powerful enough to lift that to GEO, and the following (currently operational) other rockets are more capable: Ariane 5 ECA, Long March 5, Delta IV Heavy, and Falcon Heavy (expended).

The Falcon Heavy is over 3 times as powerful as the Atlas V 551, so even a larger spacecraft would be quite possible. You wouldn't get something as big (and heavy) as a Space Shuttle orbiter up there, though (by far).

Note that there are quite a few even more powerful rockets in development.

Sure these are possible.

One would be a crew-containing capsule in Geostationary orbit. One might park there for some reason, perhaps waiting to meet another spacecraft with its fuel already in space, another might be to do some inspections, repair, "spacecraft archaeology1 for historical purposes" (i.e. spying or snooping) or even some outright mischief in GEO or the graveyard orbit just above GEO to important and/or sensitive communications and/or military satellites, or other objects of "historical significance".

Another possibility is for a short period of time (minutes) the ground track of a capsule leaving Earth orbit, potentially under propulsion to a positive geocentric C3 (energy) might by coincidence slow and appear to hover over some geographic location. It's an interesting and fun problem and I think there are seeds of a new question in this.

However, they'll be pretty dim and not likely be easily seen by a person on the surface with their unaided eyes, unless there are strong reflections involved.

1If I had a powerful space scooter and the wherewithal, this is exactly what I would do!

Not the answer you're looking for? Browse other questions tagged crewed-spaceflight spacecraft mission-design design-alternative visibility-of-spacecraft or ask your own question.

1
What thermal effect does the Sun have on spacecraft that are roughly the same distance from the sun as the earth is?
2
How are the velocity and range of a spacecraft measured from ground based stations?
16
Which crewed spacecraft provides the gentlest decent and/or landing?
3
What was the view from the Apollo spacecraft while travelling to the moon?
2
Were photographs or optical measurements of orbital craft from the ground ever used during early crewed spaceflight missions?
5
Are there any currently studied or hypothesized crewed Mars missions that utilize the Space Launch System?