How will the closure of the Arecibo dish impact deep space communications?

Earlier today, the U.S. National Science Foundation announced that it is decommissioning the Arecibo radio telescope. The 305 meter dish is famous for the 1974 message for extra-terrestrial intelligence, and its appearance in several science fiction movies. Less glamorously, its radar capabilities have been crucial for tracking near-Earth asteroids.

The facility has fallen to disrepair during the last three years, due to hurricanes, earthquakes, and funding cuts. Parts of the dish have collapsed, and two cables have snapped. Citing safety concerns, the NSF announced the decommissioning of the facility today.

How will the closure of Arecibo affect communications with deep space probes?

Wikipedia claims that there were only two radar astronomy facilities in regular use: Arecibo, and the 70 meter DSS 14 dish at Goldstone. The problem is that DSS 14 is also used by the Deep Space Network, particularly for staying in contact with the Voyagers and New Horizons probes. Indeed, I had already noticed earlier this week that DSN had started talking to Voyager 2 with a pair of 35 m dishes, rather than the 70 m dishes. Have deep space communications already been bumped to smaller dishes, so the larger dishes can track asteroids? 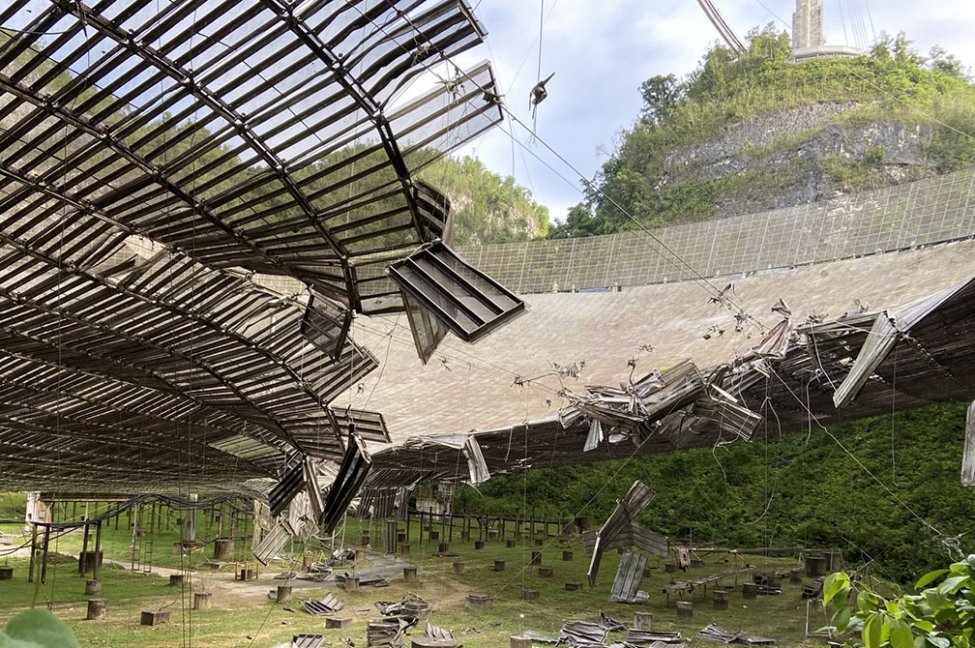 There is some indirect evidence that Arecibo's loss has already impacted communication with some of the deep space probes.

NASA’s Goldstone Observatory in California, another planetary radar, recently returned to full operations after successful delivery and testing of a new klystron tube for its high-power transmitter. Radars such as those at Goldstone and Arecibo are used only to characterize known NEOs, not to discover previously unknown asteroids and comets, so NASA’s NEO search efforts are not impacted by the planned decommissioning of Arecibo’s 305m radio telescope.

NASA's FAQ on planetary defense from asteroids does not appear to be updated for Arecibo's loss. However, it does credit Arecibo with ruling out an impact in 2029:

It also reports that radar analysis of near-Earth objects was 1/3 of Arecibo's budget:

The Near-Earth Object Observations Program provides $4.5 million a year in funding to the Arecibo Observatory in Puerto Rico – about one third of the observatory’s yearly budget – to fund its planetary radar capability. The National Science Foundation is in the process of transitioning the Arecibo Observatory to the University of Central Florida and UCF’s proposed alternative funding avenues while reducing NSF’s own level of support. NASA has agreed to continue to fund planetary radar capability at Arecibo during this transition. NASA also uses planetary radar capability at its own Deep Space Network Goldstone station. However, Goldstone’s radar is not as powerful as Arecibo’s, so it does not have the same range into space, meaning that fewer NEOs could be characterized by radar.

With the loss of Arecibo, Goldstone's DSS-14 now becomes the world's largest and most powerful radar dish. (China's 500 meter FAST dish is larger, but has no transmitter and is purely passive.) Sky and Telescope reports that "Arecibo offered 18 times the sensitivity of other existing facilities, such as NASA's Goldstone receiver." It also states

Arecibo is also irreplaceable for scientists. Even though it’s technically the second-largest radio dish in the world (China’s Five-hundred-meter Aperture Spherical Telescope, or FAST, recently broke the record Arecibo held for decades), the observatory has unique capabilities, among them its radar. “FAST cannot do radar, it’s specifically incapable of doing active observation,” Springman explains. Because of that, FAST can’t take Arecibo’s place in planetary defense by characterizing asteroids and their orbits.

It sounds like a significant amount of Goldstone's DSS-14 time will be shifted away from its Deep Space Network duties, and instead put on Near Earth Object radar duty. The 70 meter dishes of the other two DSN sites may also be similarly conscripted to NEO duty. In particular, the tracking schedule for the Canberra DSN site shows considerable changes:

So there is evidence that some of the communications with the farthest-out spacecraft have been bumped down to the smaller dishes.

It is too late now to think about a repair. The instrument platform crashed into the dish at the first day of December.

22
Why was Canberra able to listen to Voyager 2 but not talk to it?
5
Why does DSN sometimes uses two dishes at the same time to receive Voyager-1?
6
Why are messages to space constructed as pictograms?
3
What was the most intense beam ever sent from Earth?
3
How many total hours had Arecibo transmitted a signal?

10
Would an orbital Deep Space Network be more efficient?
2
How could a private organization ensure access to communications with a deep space probe or rover?
11
Why doesn't thermal radio emission from a DSN "hot dish" completely swamp the benefits of a cold LNA?
6
From whence (what ground stations) do the world's major space agencies receive signals from their missions?
1
Will future deep space optical communications "ground stations" actually be in space, or on the ground?
3
What is a Beam Waveguide dish and why do deep space communications stations use them?
5
How do the small radio receivers on space probes catch enough of a signal to communicate with us?
7
How deep could a gas giant communications network penetrate?