Are pictures taken from ISS geolocalized?

I guess my question is "naive". I get from https://images-api.nasa.gov some pictures of Earth from ISS without any description (just the mission number) or pictures of crewmembers.

Taken with a DSLR device, are these pictures actually geolocalized (or space-localized?)? I mean: I suppose GPS Satellites signals cannot reach ISS, so do astronauts take notes from each taken picture? or is there a software which converts pictures timestamps to space localization?

The location of the ISS at the time Earth photos are taken by the US ISS crew is calculated by the ground. The process is called 'Crew Earth Observation' and it's described here:

.. crew members use commercial and professional digital handheld cameras with a suite of lenses (from wide angle to a 1200 mm lens equivalent) to take Earth observation photographs that support research in a wide variety of Earth Science sub-disciplines. Scientists on the ground train the crew in basic areas of Earth system science and provide the crew a daily list of targets of the greatest scientific interest. Crew members take these photographs as time is available and during their leisure time. These digital photographs are downlinked, and both images and meta-data (especially lens used, moment the image was taken, and nadir point of the ISS) are assimilated into a public database.

In sense, however, GPS is used, because the position and attitude of the ISS is calculated using GPS.

The images are available to the public at the Gateway to Astronaut Photography of Earth.

Here's an example from there, showing a very muddy Galveston Bay flowing into the Gulf of Mexico after all the flooding from Hurricane Harvey, with the nadir point and photo center point indicated. 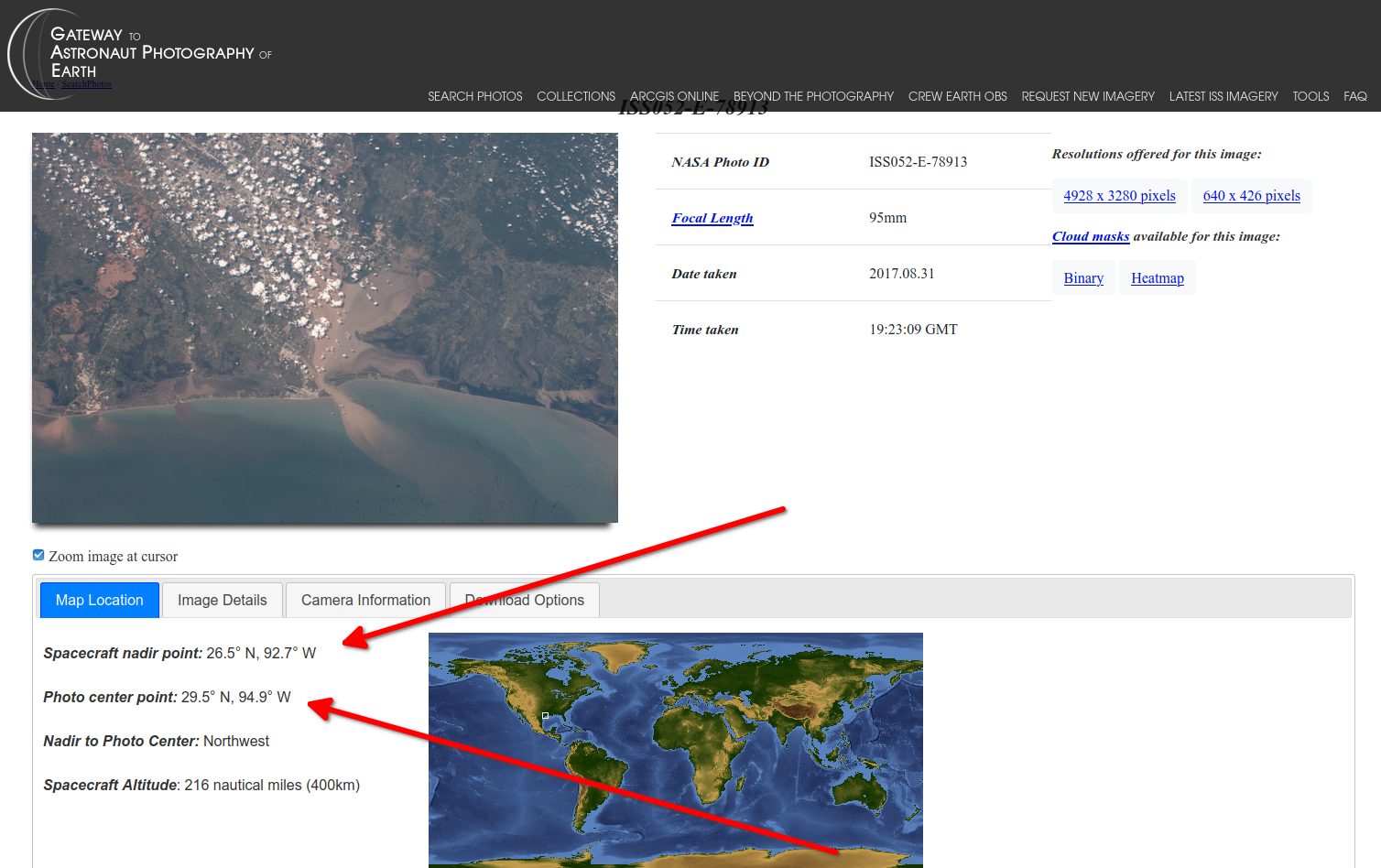 The part about Apollo photography should be split out into its own question IMHO.

If a camera is equipped with a GPS receiver and stores a valid location together with the image when used outdoors on Earth, this will not work in the ISS.

The ISS blocks the reception of GPS signals of GPS antennas inside the metallic walls.

If a GPS signal is received occasionally through a window, the civilian GPS will not work at such a speed and height. The GPS needs to "see" more than only one satellite through the small window. So the only way to geolocalize pictures taken from the ISS is to do it like described in the other answers. But a time offset of only 0.5 seconds may cause an error of some km. Camera clocks are not designed to be set with milliseconds precision.

The Apollo Missions could not use a navigation satellite. But many manual surface photos were localized on maps afterwards. 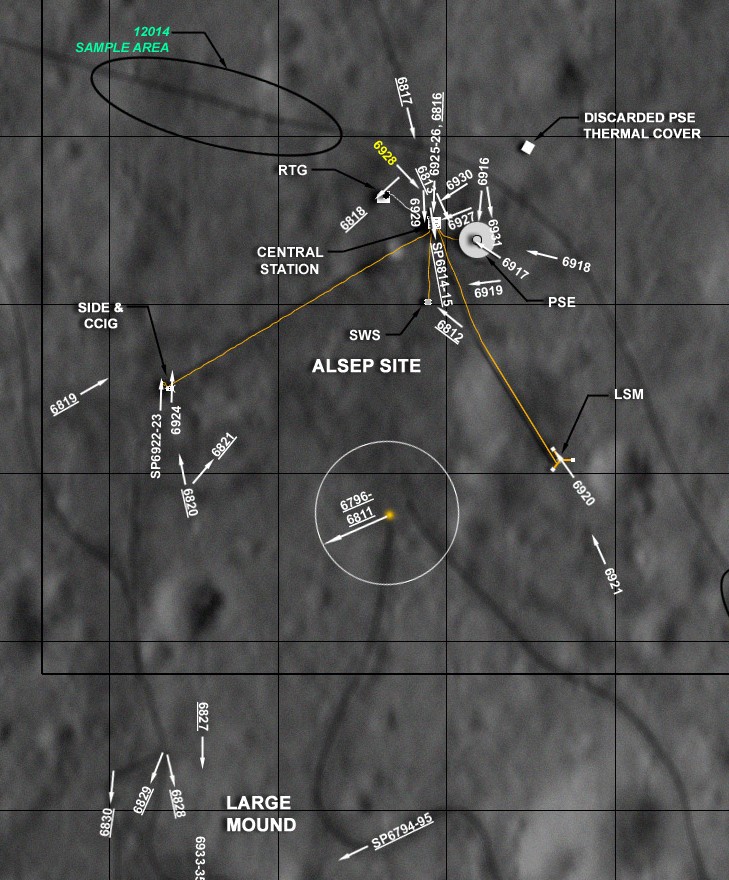 Small part of this Source.

This Apollo 12 map indicates the camera position and direction by the four digit underlined image numbers with the arrows.

The planimetric maps created by Brian McInall in 2014-7 from Lunar Reconnaissance Orbiter Camera photos and re-examination of the Hasselblad images.

The map was generated more than 40 years later using modern images as well as modern computer hardware and software. At the time of the Apollo mission such a map was possible only using a lot of manual work.

Automatic orbit photos taken by a camera unit in the Service Module were referenced with position data. The circle indicates a panoramic series of photos. The localized photos are to be found here.

Are pictures taken from ISS geolocalized?

Yes, if the astronauts keep the clocks inside the DSLRs set properly (and I'm guessing that they will definitely do this!) then the location of the camera can be reconstructed easily. What the camera is pointing at is a different question. The camera can be virtually geotagged, but not the subject.

GPS inside the ISS

I'm pretty sure that it's going to be extremely difficult for a commercial GPS unit inside a handheld camera held by hand inside of a big tin can (Faraday cage) called the ISS will pick up enough signals from enough GPS signals at any given moment for that unit to register a fix.

It might happen once in a while, but not in a regular, reliable way.

Yes answers to Does GPS work at ISS? and other GPS Q&A here indicate that the beam patterns from some GPS satellites intentionally cover an area slightly larger than earth and so there's an annulus around Earth's disk as seen from space where bright "flashes" of GPS signals will appear.

However there are several differences between GPS positioning by a spacecraft and by a simple commercial hand-held device.

Commercial units have firmware restrictions on both altitude and speed to make them COSPAR-friendly.

Commercial units require simultaneous captures of at least four satellites to get a meaningful position from space, (if they weren't self-blocking for reasons described above). Fancy space GPS can play tricks and record fixes from different GPS satellites at different times and reconstruct a trajectory with an orbit ephemeris and them back-calculate a position at a given epoch. DSLRs can't do that.

...is there a software which converts pictures timestamps to space localization?

I'm no expert, but I assume that ISS photographers keep the clocks in the cameras set properly. The orbital history of the ISS is well known and documented, so all it takes is reading the timestamp in a given historical image's metadata and some historical TLEs and one can find the position of the camera to a few kilometers.

What the camera is pointing at is a different question. The camera can be virtually geotagged, but not the subject.

Not the answer you're looking for? Browse other questions tagged iss photography .

37
How does GPS receiver synchronize time with GPS satellites?
48
What caused this bright light from the ground at night seen from the ISS?
9
Does GPS work at ISS?
10
Could an ISS astronaut photograph something like this 1km "Van Gogh" if they knew it was there?
15
Current situation with CoCom regulations and GPS receivers for balloons and cubesats
6
Did the NASA PhoneSat actually try to use the GPS from the phone itself?
9
What is this huge, red, blinking light structure on Earth seen from the ISS in this video?
3
Geolocalizing photographs on astronomical bodies
2
How to get velocity vector from GPS NMEA data?

16
What are the small crosses on space pictures, and what's their purpose?
10
Single-shot Blue Marble pictures
13
Where are the pictures during the time the pictures are sent from space to home?
13
How do astronauts take pictures from outside the ISS?
9
Can ISS astronauts see the lava from the Kilauea volcano at night?
4
How will Icarus aboard the ISS track bird migration?
9
What is this huge, red, blinking light structure on Earth seen from the ISS in this video?
3
How big are photos taken in space?
4
What's this mini-cupola-looking object in this photo from the ISS?