What is the Starship forward dome?

What is the Starship forward dome?

What other parts are connected to it and what is it good for?

The Starship design is a series of 1.8m tall rings (since commercial stainless steel is most commonly available at a maximum roll height of 1.8m) welded together into a long tube.

One of the innovations SpaceX is doing is similar to what they did in Falcon 9, a shared common dome between tanks. That is, it would otherwise be two rounded ends, meeting and thus wasting space since the are each convex and the space around it cannot be used for fuel. Instead, one tank (top) has a convex tank end, sticking into the bottom tank, where it is a concave dome.

I.e. One dome is shared between two tanks, no wasted space.

The forward dome is basically the same thing, concave at the top of the tanks. Currently they are mounting Tesla battery packs (pair of two) on top for power. There have been COPV (Carbon Overwrap Pressure Vessels) mounted there as well. For pressurizing the tanks, or for RCS gas. This is what was done up to SN6.

For the SN8 vehicle which is the first to which they mounted a fairing (where the payload or people would notionally go in a real vehicle) they mounted the fairing on top of all this hardware. (The connection is around the outside ring, not on the inside).

There is a pipe, from the LOX header tank at the top of the fairing (It is in the very top of the nose, oddly shaped) that has to be connected to the LOX tank). The headers are smaller tanks to be used for center of balance control when landing, but also mainly to provide fuel for the engines for landing. With smaller header tanks, the intake is less likely to ingest gas, or suffer from slosh, and easier to insulate.

This pipe while technically not mounted to the forward dome has to be connected (In a manner not yet well described) through the forward dome (Since it is not running around the outside of the vehicle, ergo it is going through) and has to get down to the engines directly.

(The CH4 header is part of the common dome, and has a pipe running right through the LOX tank). 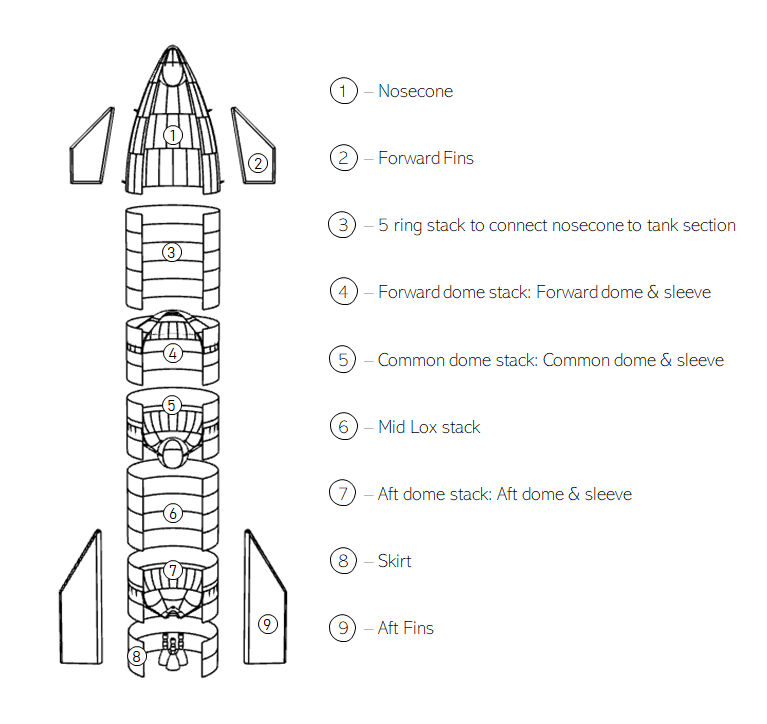 Not the answer you're looking for? Browse other questions tagged spacex design spacex-starship or ask your own question.