My grandfather who was involved with the DFVLR (now DLR) had all sorts of space-memorabilia in his basement, including a roll of pictures I've found. Does anyone know what mission they are from and what planet/body is shown (I assume it's probably from a lunar lander)? 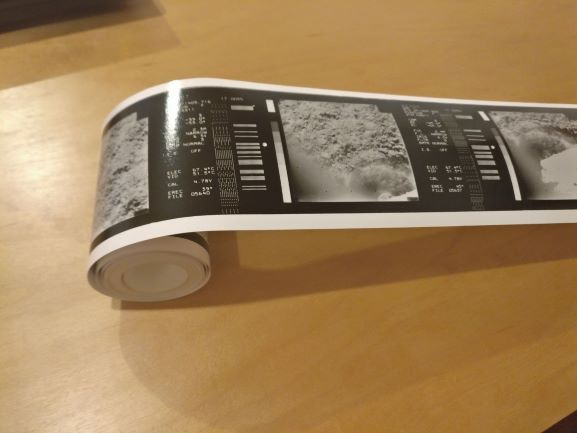 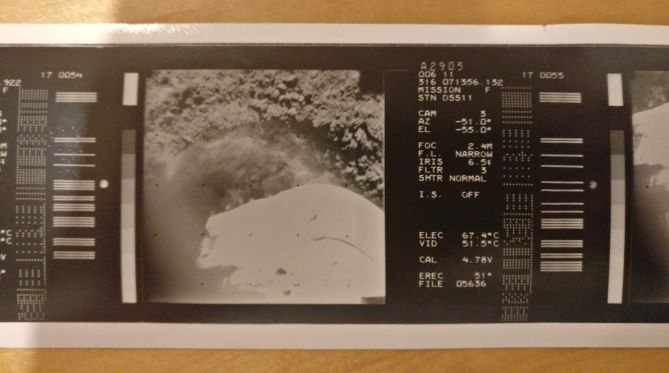 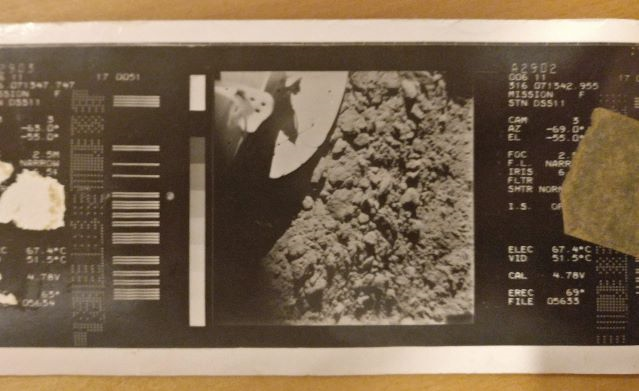 Here's the text from next to one of the pictures in case it's too hard to read:

EDIT: This seems to be from one of the Surveyor missions, here is a project where very similar images are being digitized.

These images appear to be from Surveyor 6, which sent images from the moon in November of 1967.

The Surveyor images were recorded on 70mm film. This article about digitizing images from the Surveyor missions shows pictures formatted identically (albeit shown in negative) to these.

The Surveyors had both letter designations (rarely seen) and numeric; Mission F was Surveyor 6.

Assuming the timestamp is formatted as day-of-year and seconds, the date is November 12th, two days after Surveyor 6's landing (the lander returned useful data up to November 24th). The timestamps being about 4.8 seconds apart is consistent with the 4.6 seconds it took to scan and transmit an image from the lander's television camera in 600-line mode.

STN DSS11 would be an identifier for the receiving station, the Pioneer Deep Space Station at Goldstone. DSS11 was constructed in 1958.

More details on Surveyor imagery available in a recent paper:

During the mission, the images were received by the Deep Space Stations at Goldstone, California; Canberra, Australia; and Madrid, Spain. Goldstone passed the imagery to the JPL Space Flight Operations Facility (SFOF) by a microwave link. Recording of the image was performed by analog tape machines and simultaneously recorded by two 70 mm photographic cameras, one located at Goldstone and the other in the SFOF at JPL. One camera’s 70 mm negative film was Bimat, developed using the same Eastman Kodak process used in Lunar Orbiter imagery. This process yields both a negative and a positive, both designated as first-generation copies. The negative copy was first used to make positive roll prints for first look by experimenters and engineering teams.

2
Identify this 1960's launch site and mission?
5
Identify this rocket and launch site from Gilligan's Island episode?
2
Identify this astronaut and shuttle mission
16
Does anyone recognize these rockets, and their location?
9
Apollo Mission Operations Control Room 2 display, what do these numbers indicate?
13
What are these circular spots on these Ariane V SRB nozzles?
3
How to identify an object in orbit last night?
11
Can you help me identify this vehicle outside the VAB?
5
Are there any markings that uniquely identify each Saturn-Apollo combination?