How is space assigned for satellites that follow intersecting orbits?

Assigning slots to different satellites in various polar orbits seems very difficult on account of them passing over the North Pole. 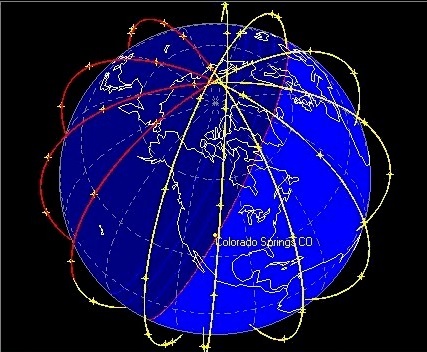 This loose intersection seems like the place where mission errors would become apparent. Is this one of the most congested regions of space? What additional measures and tools are taken into consideration for collision avoidance? How difficult is it?

As far as I know, other than for the GEO ring satellites are not assigned slots prior to launch.

In the United States various regulatory bodies approve the launch of Earth-orbiting satellites depending on their mission (e.g. the FCC approves frequencies and communications, NOAA approves Earth-imaging satellites, etc.). Part of this licensing process typically includes an analysis that shows the 25-year on-orbit requirement will be met. As of 2008, this includes what's known as a conjunction analysis, which looks at the probability of the new spacecraft intersecting old ones.

So the short answer is that slots are not assigned, but (at least in the US) analysis is required to show the spacecraft has a low probability of hitting something already in orbit.

Unfortunately in practice conjunction analysis is very computationally expensive and requires government assistance (as the orbits of many national security assets are not published). Also, because of the uncertainty in ephemerides and other perturbations that build-up on orbit, it's not a good prediction of the probability of collision on a timescale anywhere close to 25 years. That's why despite this type of analysis things still collide.

The polar region is congested, but there are a couple of mitigating factors that make it not as bad as it may initially appear to be:

No special slot assignments are made, and conjunctions are dealt with operationally, primarily based on analysis and notifications by JSpOC.

I dispute the premise of the question.

Two satellites pose a danger of mutual collision if they are in orbit at the same altitude, but in different orbital planes. In this case, they could possibly collide at the two points where the line of intersection of the two planes crosses the orbit. Those two points exist for any pair of satellites. The point on the earth directly below the possible collision point is, IMO, irrelevant.

The question for mission control is not, "Do we make it through this insane traffic jam safely?". Rather, the question is, "Do we miss Satellite A? Satellite B? Satellite C?..."

Not the answer you're looking for? Browse other questions tagged orbit orbital-maneuver collision-avoidance or ask your own question.

1
Is the Earth's orbit regulated?
9
Why do malfunctioning satellites come back to Earth?
12
Whats the protocol if two satellites collide?
8
How are co-located satellites positioned relative to each other?
0
How can a company or a person reserve an orbit for a satellite?

14
Are Molniya orbits used apart from Russian communication satellites?
10
How are retrograde orbits attained?
8
Differences between launch injection and transfer orbits for geostationary satellites
6
How do geosynchronous orbits follow the tilt of the earth?
5
How do multiple satellites deployed in the same launch reach their different final orbits?
10
How to intuitively explain that reaching geostationary orbits consume more Delta V than escape orbits?
8
How will Starlink satellites deploy from the fairing and reach their orbits?