Do other planets and moons share Earth’s mineral diversity?

Earth is full of different minerals. Each patch of land, between plate tectonics and other forces, finds itself brimming with a variety of interesting and more importantly, different, minerals.

Does the same hold true elsewhere in the cosmos? The moon, Mars, Neptune, and other bodies have often been described in terms that would imply a strangely consistent landscape; a Mars perhaps coated from pole to pole with iron oxide. Do the other planets and moons share Earth’s mineral diversity, and if not, why?

We turn to Mars, which we have studied for decades now. And we do see plenty of mineral diversity on the surface of the Red Planet, it's not just rust by any means.

Curiosity's CheMin analyzer has studied the surface mineral composition of the Gale Crater. Quoting from this answer:

This diagram provided by Curiosity's CheMin analyzer (source) shows that the composition varies with depth inside the crater: 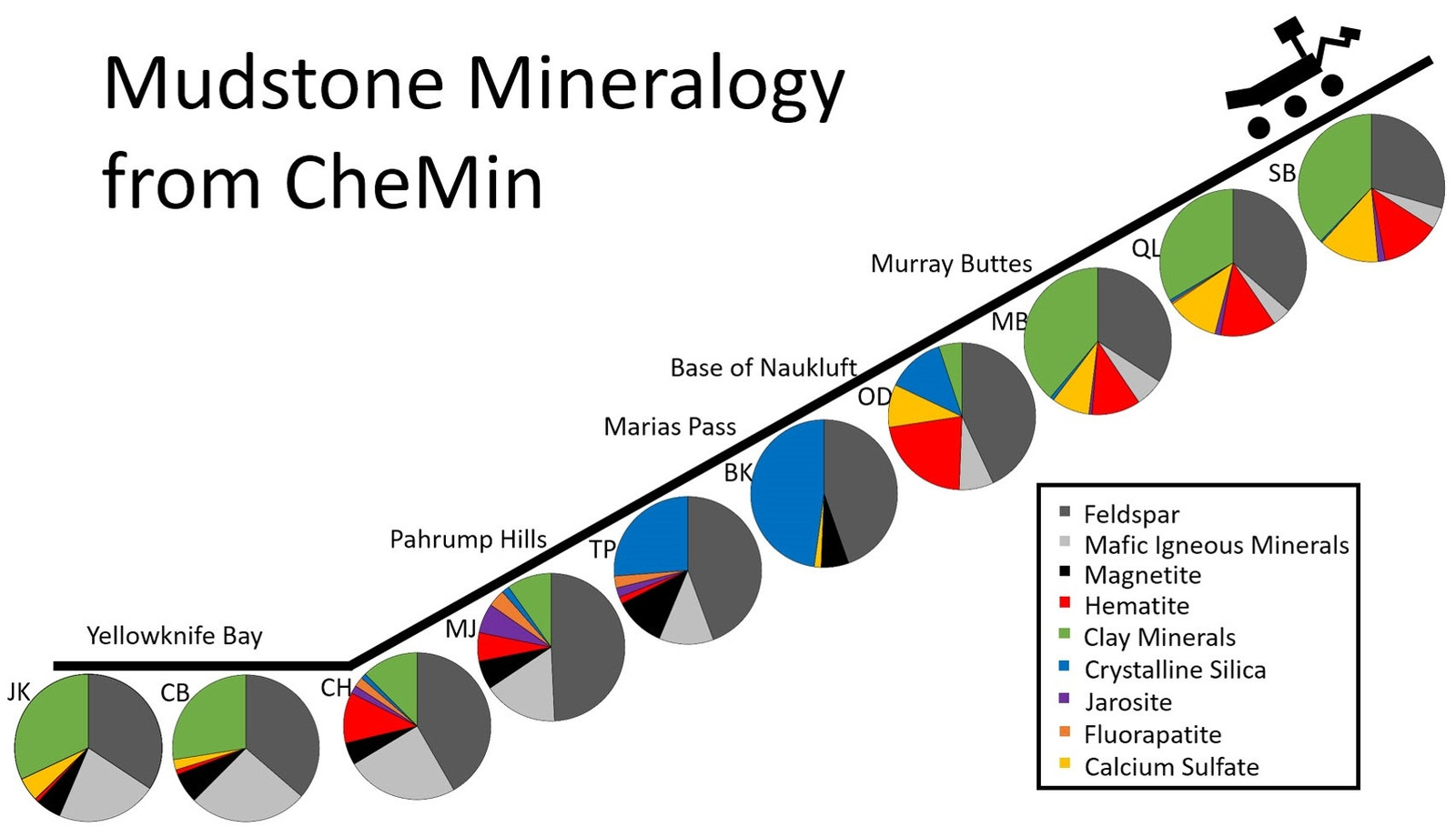 Not only do we see a wide variety of minerals also known on Earth, we see a suspiciously earthlike gradient in composition whereby the material near the top is dominated by weathering products and the bottom consists of material that must have been more protected, as if by water in an ancient lake.

In another example jarosite, a complex sulfate mineral associated with an extremely saline but still life-bearing environment on Earth, has been found by Spirit and Opportunity.

They do not! The reasons for this are simple: minerals are semi-stable configurations of elements formed in certain pressure-temperature-redox conditions. A planet in the possession of active plate tectonics will also be in the possession of more extreme pressures and temperatures (not to mention introduces chemicals to such conditions that would not otherwise be present, like water and carbonates). Also, should be mentioned, Earth being such a large rocky planet (with such a large, active core) helps generate extreme PT conditions.

Also, life creates incredibly improbable redox conditions wherever it goes. An atmosphere flooded with oxygen? Crazy! Protons being ejected into the soil? Bizarre!

Suffice it to say that mineral diversity increased as life developed. The idea that life and minerals evolved together is known as "mineral evolution"... something of a misnomer, perhaps, but it gets the point across. Earth has lots of wild minerals because it has lots of wild life. New minerals are being discovered due to human activity as well; mining operations concentrates weird elements together & exposes them to warmth and humidity.

So, the answer is no--as far as we know (we have barely explored our own rocky planets & moons, much less other solar systems'), Earth's mineral diversity is unique.

According to this dated but enjoyable Scientific American article https://sciences.ucf.edu/class/wp-content/uploads/sites/23/2020/01/Hazen-The-evolution-of-minerals-Scientific-American.pdf, Earth is likely unique in mineral count in our solar system. This is because of

Bottom line: about half the minerals on earth would not be here without Life.

We may suspect the gas giants Jupiter, Saturn, Neptune and Uranus got no minerals at all in the upper gas layers.

Planets and Moons without water should have no minerals requiring water for the formation. There should be no minerals like coal or limestone requiring plants, animals, bacteria or free oxygen in the atmosphere. These kind of minerals should exist only on Earth.

Not the answer you're looking for? Browse other questions tagged planetary-science geology or ask your own question.

11
What likely is the chemical composition of the thin piece of material on the surface of Mars on the image below?
7
How did Spirit and Opportunity identify ferric sulfate and jarosite on Mars?