Could we send a projectile to the Moon with a cannon?

In Jules Verne's From the Earth to the Moon, the main characters set out to send a cannonball to the Moon with a massive cannon. The cannonball is then changed for a shell to take on passengers.

Wikipedia describes several projects of "space guns" and some of the difficulties but only states that "the required speeds would cause most objects to burn up or be torn apart" (including, of course, human beings). This doesn't give me a definitive answer.

Could we, with today's technology, send a passive, useless projectile to the Moon surface or lunar orbit by launching it out of some kind of tube with some kind of explosion or rapidly-expanding gas? If so, what would the technical solution look like? How would it be aimed? How much could it cost? What environmental consequences would there be?

EDIT: I would like to emphasize that I am NOT trying to send people to the Moon. I am only asking about sending a cannonball or shell or whatever sturdy solid object.

Yes. One solution is a called a Wang bullet or Verne gun. The proposal actually aims to be capable of launching an intact payload (to Earth escape, and therefore also to the Moon). Obviously it would be easier if you just wanted to launch a steel slug. The proposal uses a nuclear explosion to convert water into high pressure plasma, which propels the bullet up through a kilometers long shaft excavated into the ground.

If you want a non-nuclear solution, your basic problem is to get the propellant hot enough that the speed of sound in it approached or exceeds escape velocity (about 11 km/s). The best approach seems to be a light gas gun some of which (according to the linked article) achieve velocities over 8 km/s. It doesn't seem impossible that this technology could be extended to achieve escape velocity and scaled up to launch a projectile big enough not to be slowed too much by air resistance.

As to the detailed question you ask, most of these would be fixed installations based on a deep shaft in rock, possibly emerging at a mountaintop. They would be aimed in an EW direction by timing the launch and not at all in a North-South direction. They would cost a lot, certainly millions, probably billions, and the environmental consequences could be bad for the nuclear cannon, but (apart from launch noise) probably wouldn't be too bad for the others.

It depends what you mean by "gun".

Getting to the moon is, at the level of napkin math, basically reaching Earth's escape velocity of 11 km/s. Reaching the moon requires a bit less, both because the moon is in orbit around the Earth (and hasn't itself escaped) and because the moon's gravity provides a slight help.

11 km/s has two big problems. The first is getting to that speed. A "gun" means that once you are out of the barrel, you stop acceleration.

If you want a human to survive, you are going to have to bound acceleration. At 10 Gs that requires about 110 seconds, and a "gun-barrel" of 600 km.

The second problem is the atmosphere. If your gun opens up into the air anywhere near sea level, there is a LOT of air in the way. A pretty good approximation of the amount of air between you and space is air pressure.

100 kPa times 1 meter squared divided by gravity means that, on a strait up-and-down direction, there is 10,000 kg of air above you.

At and above 11 km/s, you'll be converting the air you run into into supersonic plasma. Doing that to 10,000 kg of air is going to take a lot of energy, and will slow you down a lot.

So, to be practical, your gun muzzle has to be really, really high up.

At the top of Mt Everest, pressure is 1/3 as high, which means "only" 3,000 kg of air to get through before you reach space.

Even that is insane.

So your gun will have to be free-standing. Now, building a structure capable of free standing higher than Mt Everest runs into engineering problems. There really aren't any materials with the compressive strength to manage this. You end up building a mountain the size of a continent before you get much higher than Everest.

Luckily people have been thinking about this alot. The two easiest solutions are to create a dynamic structure, or use tension.

For tension, you have to suspend the gun from above. This seems difficult, and you still need really exotic materials to have the tensile strength required. In this case, you'd stick some object in geostationary orbit, dangle a weight further out use that counter-weight to provide force, drop ridiculously strong cables down into the atmosphere, and use that to suspend your gun barrel.

Of course, at this point you should just crawl up the cables instead, climb past geostationary orbit, do some math, and let go of the counterweight cable when you'd hit the moon. This is the "space beanstalk" accidentally invented to make the gun work.

Another option is a dynamic structure. Here the gun is supported by, well, shooting it from the bottom. Your barrel, floating in the sky, has a series of vacuum-tube towers supporting it. These towers are in turn supported by magnetic levitation; in particular, a magnetic accelerator on the surface shoots magnetic iron up the tube. In the tube, it decelerates the iron, providing an upward lifting force. When the iron reaches the top, it falls down another tube back to the surface, and loops.

If the power ever fails, the entire structure falls to Earth.

Anyhow, this technique can, in theory, support a structure 60+ km long that stretches up to the edge of space. The entire system requires insane amounts of power and has huge numbers of magnetic accelerators dynamically keeping the entire thing from crashing down.

Yet another option would be to float the structure, or drop it and have it fire while falling. A huge dirigible only reaches 2000 m up, not as good as Everest. But you could imagine building a rocket that lifts the gun itself to the edge of space? Would that count?

Now, all of this becomes exponentially easier if your goal isn't to "just shoot". If your payload is in turn a rocket, you can just use the gun to help the rocket get up to speed (to a greater or lesser degree).

Similarly, you can put the gun on a rocket, then shoot the gun high up.

Not really, cos physics

Anything described as a gun has to put all the kinetic energy into the shell/vessel at launch. So when the shell leaves the muzzle of the barrel, no further acceleration is possible.

Contrast that with a rocket, which creates its own directional thrust continuously for a period.

Upshot is that the shell has to leave the muzzle with a minimum speed of at least escape velocity of 11 km/s. That's quite quick, and any useful payload will suffer enormous G forces far beyond what squishy meatsacks can cope with. You could potentially launch solid shells, but they're useless in space. Liquids and gasses would heat and expand enough to likely rip the shell open.

This assumes your shell doesn't have rockets as well, some kind of hotted-up hybrid launch vehicle.

Next, your shell is on a ballistic trajectory. As said, getting to space is all about going sideways fast, not just going up a hundred km. To get significant sideways velocity parallel to the ground, your shell will have to fire relatively shallow angle. This means it has a lot more air to get through, and still have that 11 km/s velocity. That air will cause drag which slows things down.

Once your shell is at the ballistic peak, its highest elevation, then the path curves back down to the ground. To get to orbit, you'd need some further propulsion which could only come from a rocket. By definition, that's not the Passive object in the question.

But scale it up - if you could make a solid object accelerate to such velocities, yes it could just go "straight" at the moon, or at least where the moon will be in 9.5 hours. Even at 11 km/s the shell will take that long to get to the moon, which is moving along its orbit at about 1 km/s. So aim 34,000 km ahead, which is about 20x the visible diameter of the moon.

And then what? How would you know you'd scored a hit? The moon won't blink or reward you points. Any impact by a shell would be completely invisible from earth's surface.

To address the underlying point = What can you launch at the moon, from earth, and see an effect within about 3 seconds?

Well that would be light. You can send modulated laser pulses which are returned to earth by a series of retro-reflectors put there by 3 Apollo missions as well as 2 Russian rovers.

I can't comment because my account reputation won't allow it, but I would like to elaborate a bit on the other answers. In the discussion the term "escape velocity" has been mentioned several times.

Escape velocity is the velocity a projectile will need to have at the surface of the Earth to reach infinity at zero speed. However, here, it merely needs to reach the point between the Earth and the Moon where the gravitational pulls from the two cancel each other out. Once it reaches that point, the Moon will take care of the rest by attracting the projectile to its surface.

In the figure below I have plotted the negative of the sum of the potentials of the Earth-Moon system (V is measured in J/kg and r is in km; it is log-scaled as V spans several orders of magnitude). You can see that there is a point where the gravitational pull from the Earth and the Moon would be the same (where the potential is highest, i.e. minimum of the plot). This point is actually very close to the Moon anyway, and according to my calculations, that 'effective' velocity the projectile would need to have is 11.071 km/s, a mere 115 m/s shy of the actual escape velocity of the Earth from its surface. It wouldn't make a huge difference, but it would save you 6.6 kJ per kilogram of mass of your projectile. 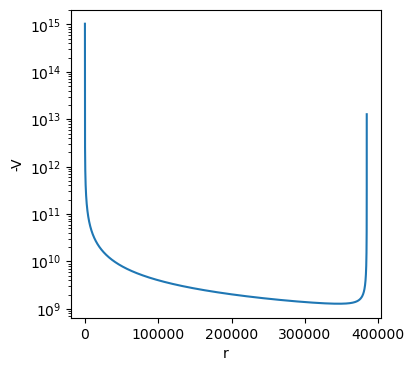 Not the answer you're looking for? Browse other questions tagged the-moon space-gun or ask your own question.

9
How might SpinLaunch actually spin something fast enough to launch it into orbit?

4
Could any existing gun reach the Karman Line?
58
Why did NASA send two astronauts to the moon instead of one?
34
Could the Moon keep an atmosphere?
1
Could a sounding rocket or a space gun payload at apogee be put into orbit with a rocket impulse from there?
5
What size payloads could we feasibly launch from the moon with a mass driver?
0
What force would it take to launch a 100kg projectile into orbit from a big cannon?
1
How much will it cost MrBeast to send a HDD alongside the new moon rover?