What led NASA et al. to decide the ISS should be a zero-g station when the massive negative health and quality of life impacts of zero-g were known?

As the month of November 2020 has marked 2 decades of the ISS being operational as well as the first operational flight of a next-generation spacecraft to it, I felt it fit to ask this question today. I will give sources to claims made in this question as desired.

From spaceflights to earlier stations like Skylab, the Salyut series, and Mir, it was known that prolonged exposure to microgravity is very damaging to human health, causing massive bone and muscle loss as well as blood loss and blood redistribution among numerous other ill effects, to the extent that a crewed Mars mission would be barely recoverable from without mitigating technology. While not fully foreseeable by the original developers of the ISS, development of this technology is happening extremely slowly, with non-negligible progress only in the field of muscle loss (the ARED is still being tested on more than a decade after launch).

Even discounting health issues, microgravity has effects that make comfortable life challenging. Because of the lack of settling, the air volume has to be kept extremely clean, necessitating loud fans that disrupt sleep. These are also necessary to even carbon dioxide and heat distribution due to the lack of convection, which also makes cooking extremely difficult—the first attempt in December 2019 taking a whole 6 times longer than in 1 g. Food consumption is very problematic in general. Even something as simple as a soft drink isn't enjoyable in space, due to eructation often resulting in acid reflux. These began to be known even before the medical effects were understood.

Attempts to ameliorate issues like these—not to mention simply designing systems to operate in the alien environment of zero-g—had cost billions in R&D even before the ISS was launched, and they knew it would continue to cost billions. On the other hand, a minimal artificial gravity station could be constructed using as little as 1 largely-conventional module with an equally-massed inert counterweight. To ease docking and attitude control a connecting module and another contra-rotating couplet could be added, for a total of 3–5 modules plus 4 trusses, 2–4 of which are pressurized†. Optional additional modules could be symmetrically added to fill out the torus. While initially at 1 g, the gravity could be reduced to determine a cutoff value, allowing the future design of (or modification of the ISS into) smaller, more mass-efficient stations. With all that in mind, why was the ISS constructed as a zero-g station at all?

My guess is that they (mostly NASA and what later became Roscosmos) did so mainly because it was the result of a combination of the much older Space Station Freedom and Mir-2 programs that faced cancellation, but only one module was completed before the ISS program was announced, which was not the first one to be launched.

IMPORTANT NOTE: I know one of the primary objectives of the ISS is the study of non-human subjects and materials in microgravity, but that research could be carried from modules docked to the central one, with the crew living in the centrifugal modules.

†This doesn't seem more costly than the ISS at "completion" in 2010, or even significantly more so than it at modular operation in 2002. Correct me if I'm wrong.

Any rotating station needs non-rotating components: solar panels need to face the Sun, radiators need to be shadowed, docking points need to be non-moving, and so on. Making a rotating joint that can last decades is hard; if the hub of a rotating station seizes up, the resulting accelerations are likely to tear the station apart and kill everyone aboard.

Making a rotating airtight joint is even harder, and you'll need one if you want both a rotating living space and a non-rotating laboratory.

It's a good question, followed by many relevant responses so far. I'll focus on the physiology aspects.

Research had been conducted for decades prior to ISS launch on creating artificial gravity through spinning. The short of it is: the human balancing system (inner-ear plus brain) cannot not handle the spinning motion on the scales of what humans could build at the time (or even now for that matter). As I recall, in order to not screw up the human motion/balancing sensory system, the radius of rotation would have to be huge, even for as little as a quarter "G" environment. Something well over a hundred meters in the radius of the spin.

The space "ring" in earth orbit from 2001 Space Odyssey, as I recall, was likely not even large enough for a near 1 "G" environment that did not screw up the human balancing system, let alone the smaller "Odyssey" ship sent to Jupiter with "HAL" on board (Can we talk about this Dave?). There are formulas for calculating the percent of artificial gravity created, using the radius, rate of spin versus the human balance sensory capabilities. If a given human has a functioning or near functioning vestibular nerve, the radius of the spin must be huge, or otherwise they would experience constant vertigo.

It's a good question you asked, worth refreshing our understanding of... every generation or so.

There was a proposal to add an experimental rotating habitat: Nautilus-X. One of those wonderfully tortured backronyms: Non-Atmospheric Universal Transport Intended for Lengthy United States Exploration - eXperimental. Its primary purpose was to extend how long humans could live in space not only through artificial gravity, but also storage for consumables, radiation shielding, micro-meteoroid defense, and self-sealing hull.

The idea was to build a spacecraft in orbit for long term journeys, but first they were going to test the idea on the ISS. 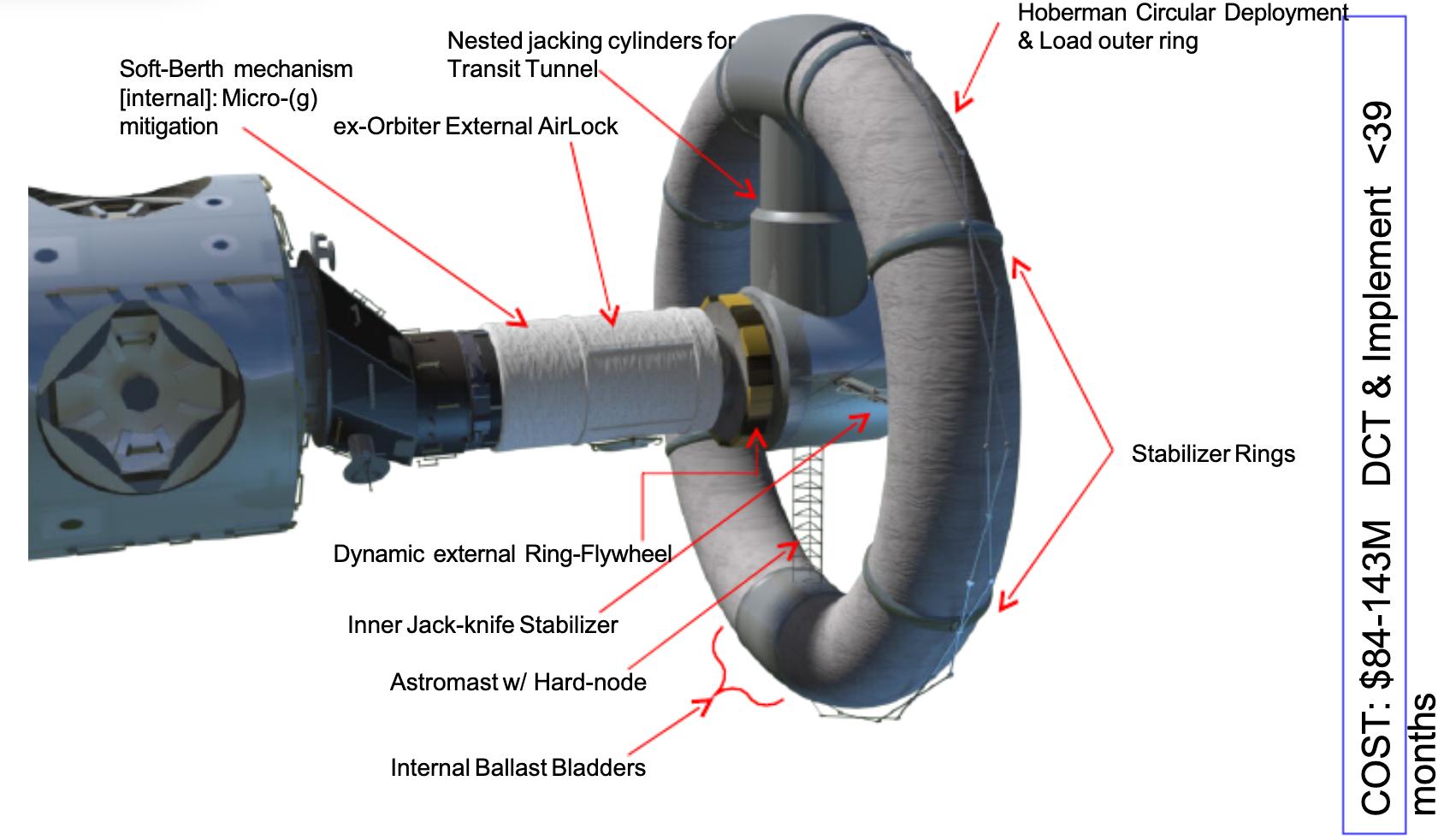 To save weight and launch costs, it would use inflatable structures pioneered by Bigelow Aerospace. It would provide partial-gravity for sleeping quarters, food prep, eating, and toilets; the last possibly being most appreciated.

One of the design goals was to not mess up the micro-gravity environment of the ISS. That means no vibration from the rotating ring and flywheel. Minimal leaks from the ring seals.

The demonstration ring would be only 30 feet in diameter with a 50 inch cross section. That's not quite big enough to stand up in, but it's just a demonstrator and standing in a ring that small might make you sick. At 10 RPM it would provide .5g.

It never happened. The proposal to build a demo is from 2011, 13 years after the ISS was launched, should give you some idea about our capability to sustain gravity in space. There is a lot of basic science and engineering we still have not done. The proposal lists them...

No space station will incorporate gravity into its design until we've gained enough experience through trial and error to answer those questions and mitigate the problems.

The other answers good, but I think we miss something.

Imagine a spacewalk around a rotating space station. With the current technology, we do need regular spacewalks.

... or the station to be stopped for maintenance?

O'Neil cylinders have a very large minimum radius of several kilometers for a reason, or several reasons in fact.

Making a spinning space station increases complexity by enough, then it has to be ENORMOUS to achieve your objective.

The cylinders rotate to provide artificial gravity on their inner surface. At the radius described by O'Neill, the habitats would have to rotate about twenty-eight times an hour to simulate a standard Earth gravity; an angular velocity of 2.8 degrees per second. Research on human factors in rotating reference frames indicate that, at such low rotation speeds, few people would experience motion sickness due to coriolis forces acting on the inner ear. People would, however, be able to detect spinward and antispinward directions by turning their heads, and any dropped items would appear to be deflected by a few centimetres. The central axis of the habitat would be a zero-gravity region, and it was envisaged that recreational facilities could be located there.

It's pretty hard to study zero-g if you're not in a zero-g environment.

Research on the ISS improves knowledge about the effects of long-term space exposure on the human body. Subjects currently under study include muscle atrophy, bone loss, and fluid shift. The data will be used to determine whether space colonization and lengthy human spaceflight are feasible.

Or to put it another way, the ISS and Astronauts that crew her are not just there to conduct scientific experiments. They are part of the experiment.

To add yet another facet to a question which has provoked such excellent answers:

A space station that is not spinning weighs nothing, however massive it is. To a first approximation, it could be held together with string.

A space station which provides a 1g centripetal force means that the floor under your feet weighs 1 ton per ton. Which is a lot of weight. Which means strong structure to hold it together. Which is massive. Which, therefore, weighs. Which, therefore, needs more strength…

Not the answer you're looking for? Browse other questions tagged iss crewed-spaceflight space-station engineering or ask your own question.

16
Where should I look in ISS to find mouldy food?
32
Have any animals that have been studied onboard the ISS come back alive?
14
Is there an upper limit for the internal size of space stations?
11
Largest inhabitable volume in space
9
Why is tethered artificial gravity hardly ever considered?
3
ISS: Airlocks between pressurized modules?
14
When did astronauts/cosmonauts start cleaning and vacuuming space stations?
5
Was TORU really used on Salyut space stations
6
Are there active proposals for the next large space station (post-ISS) to use artificial gravity?