I was scrolling in youtube and I saw this awesome video and I think, if we put an aerospike nozzle in a sounding rocket,or even a small orbital rocket, as a first stage solid booster, this type of nozzle can help a lot.

I continued to study aerospikes and I found this other awesome video and I saw, that aerospikes have two big problems. First, there is the engineering behind them (fuel pumps, pressurizers, etc ...) in short, many potential points of failure and weight, but wait, already we solve this, with solid fuel, no pumps or extra weight, so ok! The second problem is the heat. This is an unsolved problem, but as this is just a booster, it doesn't need to burn for very long.

What do you think about this idea? Is it a good idea or just something that is going to explode?

It's been tried at least once at the research level, as the paper Flight Research of an Aerospike Nozzle Using High Power Solid Rockets details. A comparison was made between conventional and aerospike nozzles on a small solid fueled rocket. 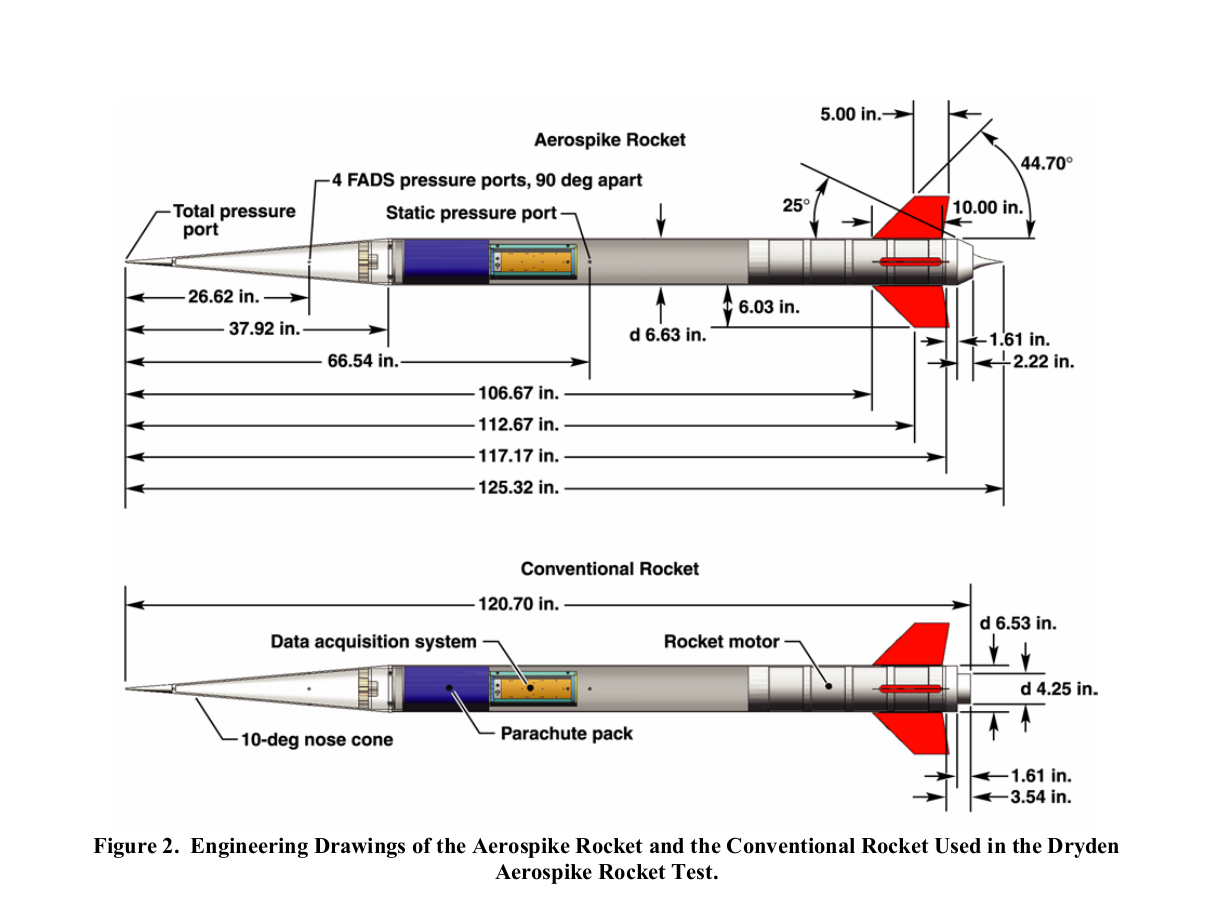 The rocket with the conventional nozzle performed better; it had less base drag and better performance.

Even though the aerospike rockets flew well, the chamber pressures and thrusts of the aerospike rocket motors were lower than the conventional rocket motors, both in the static ground firings and flight tests. Since the same propellant formulation was used in all of the motor grains, the lower aerospike chamber pressures and thrusts were likely to be caused by a larger actual aerospike nozzle throat area than the designed throat area.

There were obvious problems with the project since the aerospike nozzle efficiency was calculated at > 1; the paper's conclusion goes into some of the possible causes.

The possible advantage of the mass and complexity of an aerospike is efficient operation from sea level to vacuum, useful in a hyperthetical single stage to orbit or space plane design. It is also normally assumed the complexity/cost is recovered by making them re-usable.

Solid rockets cannot single stage to orbit in any sensible design due the poor performance (specifically mass fraction) due to entire casing needing to sustain chamber pressure. Solids work well as first stage boosters where high thrust and simplicity are useful, and they will be burned out and dumped well before making orbit (working better with rocket equations).

Achieving a steady acceleration from a solid is also tricky as mass burns off. Shaping the thrust profile is possible with careful grain design but getting a 'throttle bucket' profile would be tricky.

So we have a nozzle design really only useful for re-usable engines burning from surface all the way to orbit (and back) and a fuel system best used expendably for short durations as a first stage.

As noted in in question, cooling is a problem for aerospikes/variable geometry nozzles due to the shapes and need to be adjustable - cooling is normally achieved through one of the liquid propellants being routed through the nozzle, without them a solid fuel aerospike potentially ends up needing a liquid cooling tank system. Most solid rocket motors use ablative cooling for the nozzle which largely precludes moving parts.

This does mean that if ultimate performance was required from a solid rocket it might be possible to customize the ablator mix down the length of the nozzle to achieve a geometry change during the burn. This would most likely be heavier than a normal design, and exact ablator structure will need to be customised for each mission (as the nozzle widening rate will be fixed by chemistry, not a mechanical adjustment). This custom handling of ablator starts to reduce the simplicity, reliability and predictability of solid rockets that makes them useful in rockets.

Not the answer you're looking for? Browse other questions tagged nozzle solid-fuel aerospike or ask your own question.

11
Convergent-Divergent / De Laval Nozzle Dimensions
6
Is it unusual to vector the thrust from an SRB?
5
How can phenolic (resin?) handle rocket engine nozzle temperatures?
10
Why were large solid-fuel rockets so rare in the past?
7
What was the first rocket with de Laval (convergent-divergent) nozzle to fly?
8
How is solid rocket fuel sourced?