Do we know the likely conditions on Mars when its orbital eccentricity was very low?

Mars's eccentricity changes dramatically from highly eccentric, like now, to nearly circular, eg 1.3 million years ago and 1 million years in the future. Mars is more within the Sun's habitable zone during these times of low eccentricity. Do we know what the conditions on Mars were like during these times? Was the pressure higher or liquid water longer lasting in certain areas, etc. as compared to today?

TL;DR: Mars had a long-term increase in eccentricity from a minimum of 0.079 about 19 millennia ago and will be about 0.105 after about 24 millennia from now (perihelion distances about 1.3621 AU). During its early stages, the orbit was nearly circular (0.002 at 1.35 million years ago, and will be about 0.01 a million years into the future. This change in eccentricity brought seasonal changes due to Mars insolation and varied Martian water-ice thickness.

Numerical integration by Laskar et al. suggests that over the past 25 Ma, the eccentricity of Mars has had an average value of 0.067, and a range from 0.0 to 0.13. Over longer timescales, the mean and maximum eccentricities were marginally higher, 0.07 and 0.17, respectively. This suggests that the present-day eccentricity of Mars is somewhat higher than the long-term average. The primary effect of this eccentricity change was variations in Martian insolation due to changes in the Mars–Sun distance with additional help from orientation of the spin axis which affected magnitude and duration of the seasons. As eccentricity increased, the seasons at aphelion grow longer and colder, while those at perihelion grow shorter and warmer. The range in seasonality also becomes more extreme during periods of larger eccentricity. 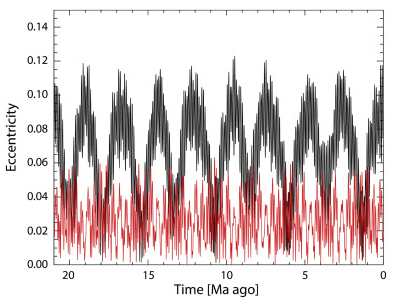 Increasing of the eccentricity exacerbated the Martian seasonal dichotomy: the northern spring and summer became longer and cooler. This cooler summer months resulted in less heating of the northern water ice cap and reduced the rate of summertime sublimation. Past Martian system were “dry”. This prevailing climate were also depended on the orientation of the spin axis during the planetary orbit. Below is the Martian ice-thickness as a function of time: 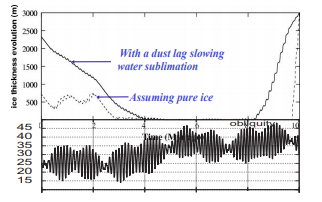 You can refer to the data and calculation from this paper by Laskar et.al.

Not the answer you're looking for? Browse other questions tagged mars astrobiology goldilocks-zone or ask your own question.

8
When could MAVEN launch to get to Mars, if it misses its launch date?
2
The problem of low level nuclear waste on Mars
6
Where exactly on Mars was Curiosity when this image was taken?
8
What was the driving record of each rover on Mars in one sol, and when?
7
What precautions are planned to prevent samples returned from Mars crashing and releasing organisms on Earth?
2
How fast was NASA Perseverance flying at when it hit Mars' atmosphere?
21
How do we know what the atmospheric pressure on Mars is?