From interplanetary space to the Australian Outback, how will Hayabusa2's return capsule be tracked? Desert Fireball Network perhaps?

Wired.com's For the Second Time Ever, an Asteroid Sample Returns to Earth says that "the sample return capsule from Hayabusa2" will land "under parachute in the Australian outback" "early on (this) Sunday morning".

Australian astronomers have extensive experience reconstructing the trajectory of a fiery objet through the upper atmosphere and then modeling it's descent to the surface, predicting the best place to look for it, then looking for it and finding it. For more on that see answer to How long between the moment a meteor is first visible and the moment a meteorite hits the ground? and Wikipedia's Desert_Fireball_Network.

Question: Is that how Hayabusa2's return capsule will be tracked? Is that why reentry is scheduled for early on Sunday morning when it's dark enough to visualize reentry but will soon be light enough for visual location on the surface?

Or is that all just a coincidence and tracking will be done via spacecraft telemetry before entry begins and "Outback radar" stations once it does?

You can catch a livestream of the fiery finale of Hayabusa2’s main mission on Japan Aerospace Exploration Agency’s YouTube channel. The capsule is scheduled to begin its atmospheric entry at around 12:30 pm ET on Saturday (or 2:30 am on Sunday in Japan) and will land about 15 minutes later.

NOTE: There are several livestream events on JAXA's site! The capsule separation even is scheduled to start about six hours after this question was originally posted for example. Check it out!

There's a good description of the planned landing procedure in the news item, Japan's Hayabusa2 space capsule to fall back to Earth after six-year asteroid mission.

Essentially human observers on the ground at Woomera and in the air, combined with radar tracking and the use of a tracking beacon will be used to track and locate the returned capsule.

As the capsule descends towards Earth at supersonic speeds, its trajectory will be tracked by teams of scientists spread across hundreds of kilometres on the ground and in the air.

As the sole international observer, Australian scientist Trevor Ireland will be on board the helicopter tasked with spotting the capsule somewhere in an area tens of kilometres wide.

"We should know pretty much where it is as it comes down," said Professor Ireland of the Australian National University, who was also on the science team for the Hayabusa1 mission. 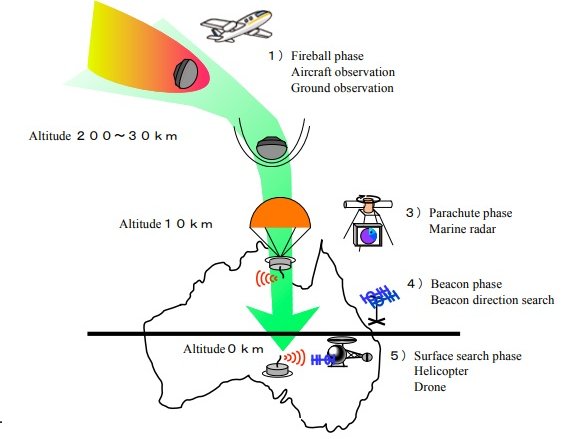 "Last time it was very spectacular because the spacecraft came in with it," Professor Ireland said.

"This time we don't want it to be quite so spectacular, we just want to see that nice red glow of the space capsule coming in."

Once the capsule slows down enough, it will deploy a drag parachute and then a second main parachute.

Scientists, including four teams from the Desert Fireball Network at Curtin University, will track the trajectory of the capsule as it streaks across the sky.

"The Desert Fireball Network team will be putting out cameras all the way along the Stuart Highway to take pictures of this bright shooting star," said team leader Ellie Sansom, who is currently in Coober Pedy.

The Desert Fireball Network has also partnered with a group of Japanese researchers who cannot be in Australia due to the COVID-19 pandemic, and is putting out instruments from them that listen to the sonic boom and detect any ground shaking.

Back in Woomera, more than 70 Japanese scientists will track the descent using radar, Professor Ireland said.

"The radar guys will get a much longer view of it as it comes in because once the parachute opens up they'll have a bigger object to look at," he said.

A radio beacon on the capsule will help the Japanese scientists refine the position.

Meanwhile, NASA scientists flying on two aeroplanes will observe how material blows off the heat shield of the capsule as it descends.

"That last 10 kilometres is the big issue as it's coming down, once it gets into our weather systems."

If the weather isn't kind, it will make the retrieval a little trickier too.

"If it's not a very nice day, they'll try to get it contained very quickly so it doesn't get covered in dust or rain."

Once the capsule lands, a team including Professor Ireland will head out to search for it.

Not the answer you're looking for? Browse other questions tagged tracking sample-return jaxa hayabusa2 australia or ask your own question.

5
How can a meteor gain energy in an encounter with the Earth even though these answers say it can't?
4
Will they really be able to "see" OSIRIS-REx from Australia? With meteor cameras?

5
How are ultra-sensitive aerogel suspended samples secured for Earth reentry and touchdown?
3
How could JAXA not know when Hayabusa2 will arrive at asteroid Ryugu?
4
How does the HTV Small Return Capsule get used?
7
What precautions are planned to prevent samples returned from Mars crashing and releasing organisms on Earth?
2
Will surface samples from Mars orbit the planet in a spherical capsule until captured?
6
Could the uncertain mass of the OSIRIS-REx sample affect the trajectory of the return capsule?
7
How does Hayabusa2's return capsule orient and stabilize after separation and before and during reentry?
4
Have lasers ever been used to track laser-reflective parachute cloth for spaceflight missions? And what is it by the way?
8
Actual mass of Chang'e 5 samples