Three-body spacecraft orbits1 are regularly discussed here and from time to time someone will include a pseudo-potential plot from Wikipedia in their explanation.

The discussion often goes south when it tries to reconcile that L4 and L5 sit at potential maxima and yet an object placed there is stable; if you give it a small perturbation or "kick" it will stick around in the general area. It's this kind of stability that allows planets (especially Jupiter) to collect and retain Trojan asteroids associated with their Sun-planet L4 and L5.

Today I saw the "It's Just Astronomical!" video The Parking Spaces of Space: The Lagrange Points and the explanations provided seem unphysical and wrong.

If "into" were scratched out and changed it to "towards" and it were made clear that this is only the initial motion, this might be salvageable.

But the animations show the balls following paths going well down into those three pseudo-potential "wells" in ways that simply can't happen in reality.

"bonus points" for any sighting of a proper animation that includes a dynamic pseudo-potential plot and an object moving across or on top of it.

This graph shows us the effective potential energy and it tells us how objects will move.

An object who’s orbit starts here will slowly drift towards the Sun.

An object starting here will slowly drift towards the Earth.

And an object starting here will slowly drift away into the outer solar system. 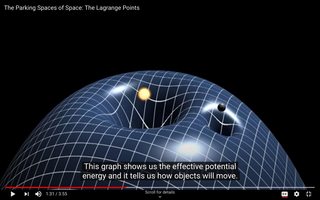 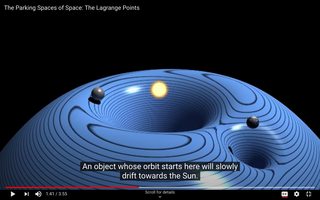 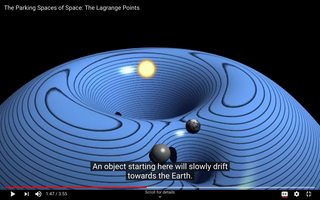 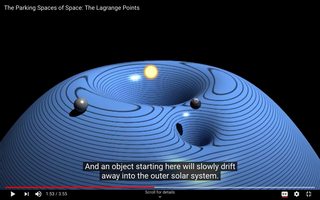 The pseudo-potential/effective potential for the circular restricted 3-body problem is the sum of the gravitational and the centrifugal potential, cf. Fig. 1. 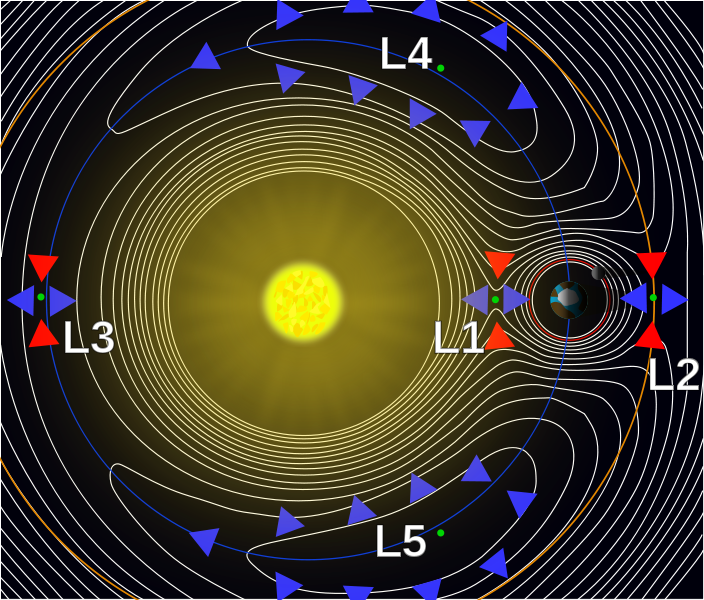 The main shortcoming of the linked video is that it fails to mention the role of the Coriolis force. Due to the Coriolis force, a test mass $m$ (without propulsion) will drift along (instead of perpendicular to) equipotential lines! ($\leftarrow$ This fact alone ensures that the pseudo-potential is still physically relevant, cf. OP's title question.) The drift is often superimposed with a circular motion of angular velocity $-2\Omega$, cf. Fig. 2. 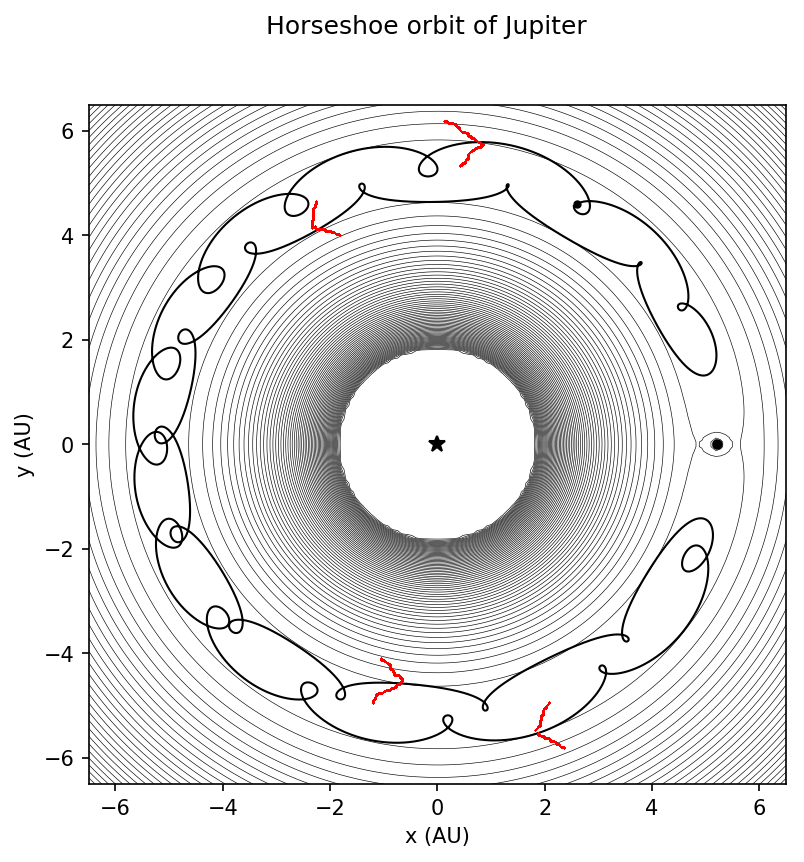 For a derivation, explicit formulas, and more information, see e.g. part III of my Phys.SE answer here and my Space.SE answer here.

All confusion around this thing comes from making the assumption that it is a regular 3D surface, which will behave just as you expect it to if you were to drop a marble on it.

You can make the same nonsensical assumption on a regular 2D graph. Take the Voyager 2 velocity graph, for instance. You could imagine a marble rolling around on top of it too, drawing all sorts of wildly incorrect physical interpretations from it like "getting stuck in the gravity assist valleys", or "gaining more speed as it rolls downhill from the Sun".

People are used to 2D plots not working like that. What makes it plausible that the pseudo-potential surface should act like that at first glance is that it has some similar properties: "Standing still" requires being on a "flat" spot. Rolling "uphill" will cause you do slow down, going "downhill" will increase your velocity.

Why shouldn't we illustrate spacecraft trajectories on top of these static pseudo-potential surfaces?

We shouldn't? I think it is an excellent to plot repeated flyby trajectories and 3-body orbits. Just make it clear that it's a rotating frame of reference. Rotating frames are unintuitive, but also useful. Perhaps producing some educational videos of rotating frames would be better than making (incorrect) videos about a subject that requires knowledge of rotating frames?

What will really happen to these three objects?

What will happen to the pseudo-potential surface as soon as they do start moving?

Nothing, as this is an idealised circularly restricted three body problem. Perhaps what you are looking for is the actual potential energy plot of a two body system? It's a trumpet-shaped well for the main object, with a smaller trumpet shaped well orbiting it ("moving") for the secondary object. And contrary to the pseudo-potential surface, you can roll marbles around in it!

These are as much comments as answers, but they do provide some different perspectives.
[This has been edited based on helpful pointers from @uhoh. The earlier comment about the total energy of a test particle being conserved was not correct.]

1. Chladni patterns (sand on a vibrating plate).
In the presence of two large masses in circular orbit, the conserved quantity (akin to energy) is the Jacobi Integral. The Jacobi integral, EJ is the sum of the gravitational potential energy plus the centrifugal potential energy plus the kinetic energy (as seen in the rotating frame). The plots of quasi-potential, EP correspond to the sum of the two potential terms and omit the kinetic energy. Since EJ for a small test particle remains constant (conserved), the kinetic energy (~speed-squared) is the difference between the fixed value of EJ and the quasi-potential surface, EP. So, given a value for EJ for the particle, its speed can be found as sqrt(EJ-EP). Unfortunately this is speed not velocity, so it doesn't help establish the trajectory, but it does tell us something about the probability of finding the particle in a particular place. The probability of finding the particle in an elementary volume of space is inversely proportional to its speed (among other things).

In general, the motion of our test particle will be chaotic, even with only two large masses present. Particles will have their maximum quasi-potential energy and lowest kinetic energy in the rotating frame when they are close to the L4, L5 points. Lowest kinetic energy means lowest velocity. This means that the particle has highest probability of being found close to L4, L5. This is especially true of particles whose value of EJ is exactly equal to the maximum quasi-energy, EP (which is reaches its maximum at L4, L5). Their speed will slow to zero as they approach the Lagrange points and thus they are almost certain to be found there.

2. Simple Harmonic Motion
For situations where the panetary mass is much smaller than the central mass, the L4, L5 points still exist, but the forces from the planetary mass will be very small. In this case, we can consider the test particle to be in a simple Keplarian orbit around the central mass. Assume the orbit of the planetary mass is circular - as will be the L4,L5 orbits. Assume our test particle is in the same orbit as L4 or L5, but slightly perturbed. We will observe it from a rotating frame attached to L4 or L5.

If the perturbation is made to the eccentricity (still in plane), then the test particle will again appear to move with simple harmonic motion around the Lagrange point. In this case, because of the Coriolis effect, the orbit will be an ellipse with axes in the ratio 2:1 (if the perturbation is larger, the ellipse becomes 'kidney bean shaped'). 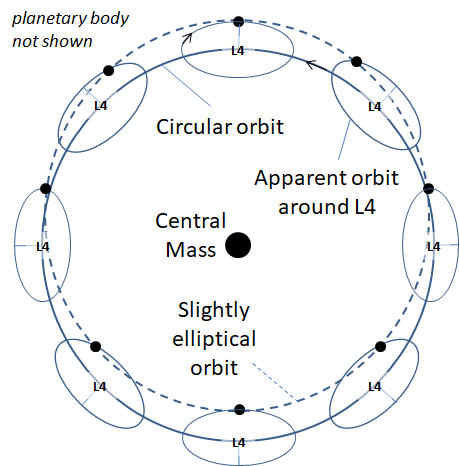 So, viewed from a rotating frame attached to the Lagrange point, very small perturbations from an L4 or L5 orbit will result in a particle making small elliptical orbits around L4 or L5 with the same period. However, these are not Keplerian orbits. They are orbits with simple harmonic motion such as where the central force is proportional to distance (rather than inverse-square) and the potential is quadratic.

From this perspective, there is no equivalent point mass at the L4, L5 points. Instead, locally, they can be considered to be the center of a sphere of constant frictionless mass density (dark matter!) within which these simple harmonic orbits can persist. The required mass density is the mass of the large central object divided by the volume of a sphere that the planetary orbit would enclose, M/[(4/3)pi.R3]. This ensures that the period of these simple harmonic motions will be the same as the orbital period of the Lagrange points

Not the answer you're looking for? Browse other questions tagged orbital-mechanics simulation halo-orbit three-body lissajous-orbit or ask your own question.

25
What is the "mass" of a Lagrange point?
5
How does gravity change beyond L2?
2
Did Corporal or other rockets launched from White Sands land in Mexico? If so, how often?

17
Is the difference in orbital velocity of different parts measurable on board the ISS?
6
What is the basic mechanics behind the way the orbits of the twelve Vela spacecraft evolved over decades?
5
Two 1000 kg gold spheres orbit their CM in near-contact, great way to measure G or limited by spaceflight issues?
8
How do stable equilibrium points work in GEO? If all geosynchronous spacecraft suddenly lost stationkeeping, would most "fall into" one or the other?
9
Orbit stability
5
Why is L2 Langrangian point stable?
2
Would the Yarkovsky effect ever be faster than a solar sail from a 1 AU orbit to the Sun?
20
Escaping moons conflict with what I understand of gravity
3
Why did the last six TDRS satellites start at ~7° inclination on a downward trend that appears to be "repelled" by zero & bounce back w/o crossing?