Have lasers ever been used to track laser-reflective parachute cloth for spaceflight missions? And what is it by the way?

In the JAXA PDF Hayabusa2 Information Fact Sheet (Ver. 2. 3, 2018. 07. 05, found here) on slide/page number 53 there is a diagram labeled Re-entry sequence overview and in the top right corner is depicted the sample recovery capsule descending in Earth's lower atmosphere suspended from a parachute.

"bonus points" for any information about the reflectivity being specific to lasers. I'm guessing they include the word "laser" just to help us understand how it might be used, rather than to suggest it's specifically designed to be reflective for laser light, but maybe there are specific enhancements that I don't know about. 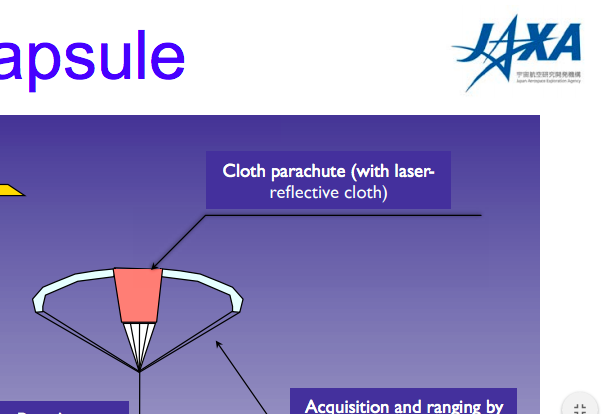 I think it is a retroreflective material like that used for High-visibility_clothing. There are reflective tape originally developed by 3M. A reflective coating of tiny glas spheres is used as retroreflectors. The surface should reflect radiation (usually light) back to its source with minimum scattering.

Using retroreflectors in space has a long tradition. They were placed on the Moon by Apollo 11, 14 and 15, the Lunokhod 1 and Lunokhod 2 rovers, but also on Mars Perseverance rover. Also on many satellites for Satellite laser ranging.

The reflective cloth should be used only at certain places of the parachute. Using it at the top of the chute does not make sense. Best places are those being vertical to the laser beam like the red rectangle shown in the image.

You need a material reflecting visible light, it works with light from incandescent bulbs, electronic flashes and lasers too. A very narrow laser beam is useful for long distances. Lasers light is just better focused than other artificial light. Lasers may produce very short pulses of high intensity as need for ranging over a large distance with a high precision and resolution.

Not the answer you're looking for? Browse other questions tagged tracking recovery sample-return parachute visibility-of-spacecraft or ask your own question.

8
How does Hayabusa2's return capsule orient and stabilize after separation and before and during reentry?

17
What are the disadvantages of parachute+airbag for atmospheric landing, versus rocket-based?
6
Modelling for the LDSD parachute - what are the issues with scale models and software simulations?
11
What is NASA doing to improve the supersonic parachute for the third LDSD test?
8
What forms of water ice have been observed and verified in the solar system?
26
What skipped test on Genesis would have detected the backwards-inserted accelerometer which didn't deploy the parachute?
5
Do the passengers in Virgin Galactic's VSS Unity spacecraft have a parachute or some other way to escape the spacecraft if needs be?
6
What is the heaviest object to have been returned to Earth with a parachute?
2
Were photographs or optical measurements of orbital craft from the ground ever used during early crewed spaceflight missions?