What is the altitude of a surface-synchronous orbit around the Moon?

A geostationary equatorial orbit (GEO) is a circular geosynchronous orbit in the plane of the Earth's equator with a radius of approximately 42,164 km (26,199 mi) (measured from the center of the Earth). A satellite in such an orbit is at an altitude of approximately 35,786 km (22,236 mi) above mean sea level.

And then what is the altitude of a satellite orbiting the Moon and synchronous with the surface i.e. remaining approximately over one area of the Moon?

As computed in this answer on the Astronomy SE (h/t Organic Marble), the altitude would be 88,417km if the Earth weren't present, but an orbit of that height is outside of the moon's sphere of influence. There is no stable orbit around the moon with a 28-day period.

@Russell Borogove's answer which invokes @zephyr's answer in Astronomy SE is correct if one a priori requires the central body being orbited to be the Moon.

tl;dr: There are two potential solutions to this problem but neither is an orbit around the Moon per se.:

EM L1: A Halo orbit associated with Earth-Moon L1 would keep a spacecraft between the Earth and the Sun and fairly close to the Moon. L1 (and L2 below) fall roughly at the Hill sphere radius $R(M_{Moon}/3 M_{Earth})^{1/3}$. With a separation $R$ of 385,000 km and a mass ratio of about 1/81 that would be about 60,000 km above the Moon's surface and meander around that area by several thousand km.

Long term it wouldn't be stable and requires some station keeping, but of course geosynchronous orbits around the Earth also require station-keeping to keep from drifting east-west to be over a substantially different point on the Earth, as well as to maintain low inclination.

EM L2: Similar to EM L1 above except visible to the far hemisphere of the Moon.

This orbit is currently being used by the Queqiao communications satellite, see below.

EM L4 & L5: similar. Since the Earth/Moon mass ratio of about 81 is greater than the critical value of $(25 + \sqrt{621})/2 \approx 24.96$ one can put spacecraft in orbits associated with these points, which will remain roughly above points 60 degrees east and west of the average sub-Earth point on the Moon's surface.

The title of the question was originally What is the altitude of a Moon synchronous orbit? so I'd started down this path before clarifications were made for the OP by third parties.

While a high inclination Sun-synchronous orbit around the Earth can always keep the Sun in view by slowly precessing around the Earth (once per year), there is no solution that could precess once per lunar month of about 27.3 days.

The ISS precesses around with a period of the order of sixty days for example, but at it's inclination it is usually (but maybe not always) hidden from the Moon once per orbit. 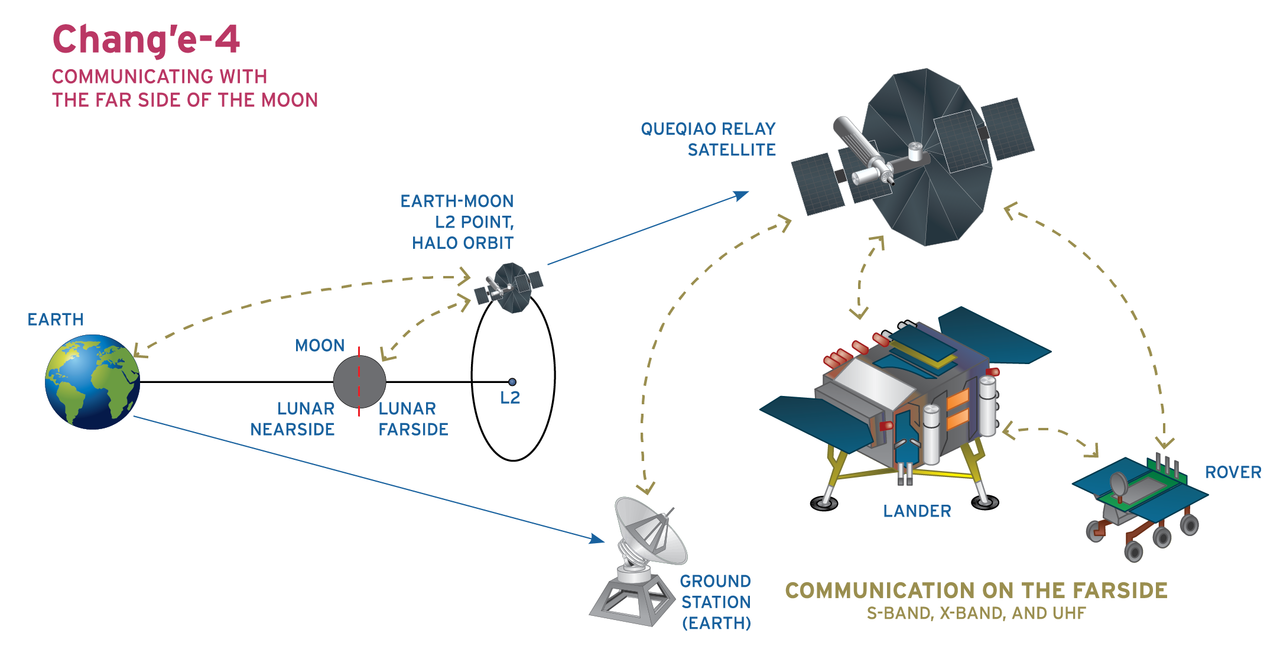 Not the answer you're looking for? Browse other questions tagged artificial-satellite the-moon or ask your own question.

13
Can the Right Ascension and Argument of Perigee of a spacecraft's orbit keep varying by themselves with time?
12
Are some Halo Orbits actually Stable?
5
How many stages will likely be used to bring NASA astronauts to the Moon's south pole and safely back to Earth?
3
Station-keeping delta-v per year for an Earth-Moon vanilla halo orbit?

26
Can a satellite orbit Earth so that it always has the Moon in line of sight?
10
How much “wobble” does a typical geostationary satellite experience?
8
What is the highest non-equatorial earth orbit used?
7
Is a sun-blocking orbit possible?
3
Why is Angular Momentum of Satellite Rotating in ECI Frame?
5
Inclination maneuvers for GEO satellites
6
Why is the Duration of Time spent in the Dayside greater than that of the Night side of the Moon for Chandrayaan-2 Orbiter?