In a discussion associated with this answer a comment includes the following:

The ISS is the only spacecraft in the world that has experience with regular on-orbit refueling.

The propulsion system of the Service Module (public relations name: Zvezda), part of the Russian side of the ISS, is refueled by Russian Progress spacecraft, and formerly by European Automated/Ariane Transfer Vehicle (ATV) spacecraft.

Both Progress and ATV spacecraft deliver approximately 850 kg of propellant to the ISS.

The propellant is transferred through ports on the docking interface.

This schematic drawing shows the tankage in the midsection of the Progress. 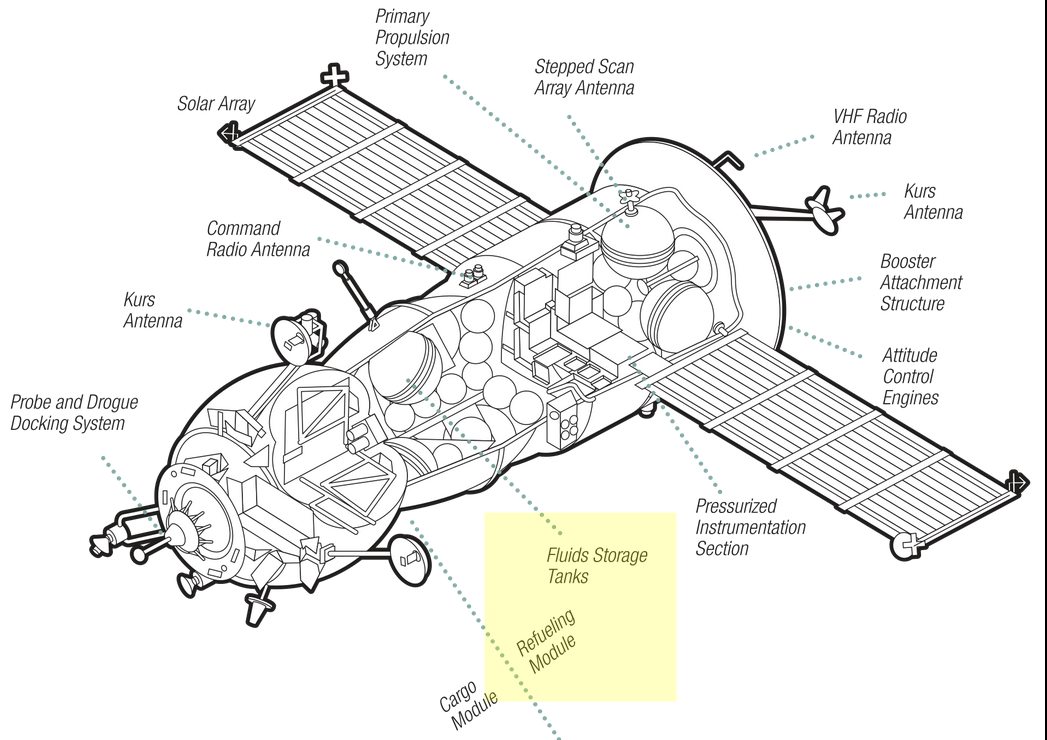 In addition to the standard operational refueling missions that are part of normal station-keeping operations, there have also been experiments performed that studied in-space refueling.

In particular, three phases of the NASA Robotic Refueling Mission have been completed, which simulated on-orbit refueling of a satellite not designed for refueling. A module was installed on the outside of the ISS that mimicked the fueling connections on a typical satellite. Note that "fueling connections on a typical satellite" here means the kinds of connections, valves, seals, etc. that you would find on a satellite not designed for refueling, to be only used once, on the ground, for initial fueling of the satellite.

Not the answer you're looking for? Browse other questions tagged iss low-earth-orbit refueling or ask your own question.

8
Is Landsat-7's propellant resupply port "robot-ready"? (Restore-L mission)
6
How will Robotic Refueling Mission-3's liquid methane tank remain full for six months without any boil off?
0
Mars. Would it save time to launch from the ISS?

15
To what extent are the US modules of ISS based on the Spacelab design?
19
How often does the ISS orbit align with the day/night terminator?
10
Liquid settling in tanks during orbital refueling
11
Has on-orbit refueling ever been demonstrated with cryogenic fuels?
8
Which engine worked the hardest to keep the ISS in orbit?
5
How many time-zone does the ISS cross through during one orbit?
3
What orbit-raising propulsion system will Tiangong use, and how does it differ from that of the ISS in terms of performance and technology?
2
Which two spacecraft are being shown disconnecting here, and what was the connection for?