How did Argentina, Namibia, and Pakistan help China monitor and communicate with Chang'e 5?

At the end of The Hill's article Chinese official unveils future moon mission plans including possible lunar base it says:

The most recent Chang'e 5 probe was assisted by the European Space Agency, as well as Argentina, Namibia, and Pakistan, which work with China monitoring and communicating with its space vessel.

Question: I can imagine that ESA's space communications network was helpful, but how did Argentina, Namibia, and Pakistan actually assist China with monitoring and communicating with Chang'e 5?

The Hill is not a go-to source for space news, so perhaps this just means that those countries have leased land on which China has placed an antenna?

There is a Chinese run ground station in Swakopmund, Namibia. 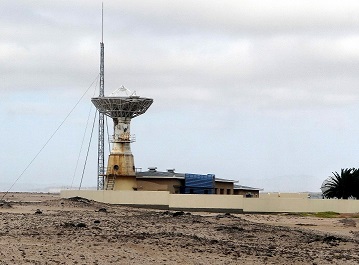 This station is part of the "Chinese Tracking, Telemetry, Command and Communications System", which has similar stations also in Karachi, Pakistan and Malindi, Kenya.

In 2014 China and Argentina signed an agreement that allowed China to establish and operate a deep space station in Argentina.

According to Reuters, the Chinese military runs the station in Argentina. The site is on a 200 ha compound, in a remote part of Argentina.

While it still has access to an Australian space dish, at Yatharagga in Western Australia, operated by the Swedish Space Corporation, the Chinese might have used it as well.

The Chinese space tracking station in Argentina is due south of Washington DC and is thus in line with geostationary satellites servicing the east coast of the USA.

The European Space Agency has a smaller facility,

about 600 miles north of the Chinese base, in Mendoza Province of Argentina. But that operation is run by Argentinians on behalf of the European agency.

In addition to the land based tracking stations in Argentina, Namibia, Kenya and Pakistan, China uses at least five ships at sea for its space program.

The tracking stations in Pakistan were established as part of a deal with China, when China made the PAKSAT-1R satellite.

The full list of Chinese space tracking stations is fairly extensive, with assets on most continents except North America and Antarctica.

Not the answer you're looking for? Browse other questions tagged communication radio-communication china chang-e telemetry or ask your own question.

5
Is there a way (working or in development) to track satellites in lunar orbit like we track objects in Earth Orbit?
4
Transmission time per day for Chang'e 4?
3
What will China's new "space station" in Argentinian Patagonia be used for?

11
Do lunar landers communicate with ground stations during descent and landing?
3
What will China's new "space station" in Argentinian Patagonia be used for?
8
Will Chang'e-4 really take a month to "get to the Moon"? With what trajectory?
2
What radio frequency does China use to communicate with the Chang'e-4 satellite?
21
Why did China land a rover on the moon?
2
How did Chang'e-4 hover, rotate, and then descend so gracefully? (Video)
1
Did the US hide 4179 Toutatis orbital data after China announced intentions of going there?