Why did Columbia disintegrate lower into the atmosphere, not during its peak heat phase?

Space Shuttle Columbia entered a period of peak heating at 46 mi (74 km) altitude. Before the contact got broken, the temperature on Columbia's wing leading-edges had sunk already (and the heat shield damage was on a wing). Why did the disaster happen despite being past the hardest phase of reentry? During this phase the shuttle broke up more and more, so was this due to the additional damage during the reentry? It eventually disintegrated around 39 mi (63 km) altitude.

The story of the destruction of the orbiter during entry is told in extreme detail in Section 4 of Appendix D.7 of the Columbia Accident Investigation Board report Volume 2.1

The very short version of the story is that a small plume of plasma entered the wing through the breach in the wing's leading edge thermal protection system, and it took a while for this plume to cause sufficient damage for the wing to suffer structural failure.

The wikipedia link in the question states that at Entry Interface (EI) + 404 seconds, "Columbia entered a 10-minute period of peak heating, during which the thermal stresses were at their maximum." Let's take a look at what that means.

This graph shows the heating rate on the wing leading edge panel. 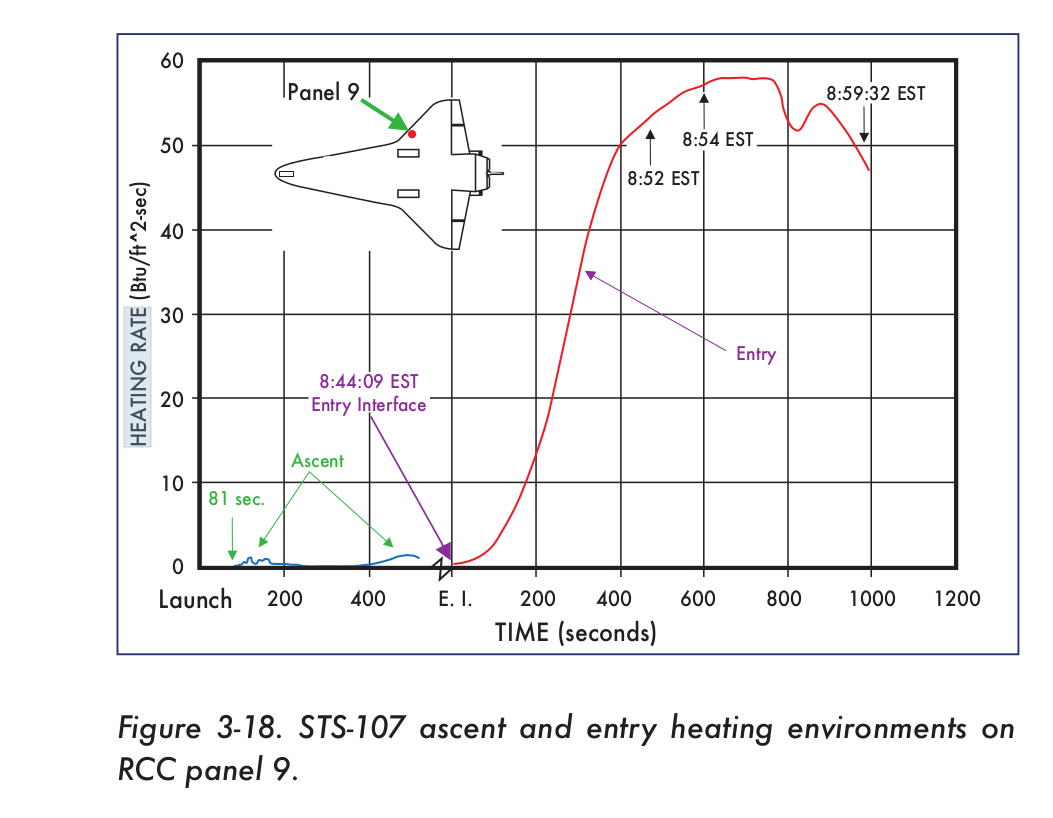 There doesn't appear to be anything special about EI+404 based on this graph. The heating rate continues to increase until ~ EI+620, then plateaus until ~ET+750.

The document records the progression of the damage as the plume ate away at the wing insides:

So to directly address the question: Why did Columbia disintegrate lower into the atmosphere, not during its peak heat phase?:

1 At least for me the pdfs on this page do not work when clicked. I have to download them first to a file, then open them. If I just click them, I get a scrambled ASCII file.

7
What was the design and/or results of the fish experiement onboard Space Shuttle Columbia disaster mission STS-107?
14
Was the possibility of damage to the SS Columbia made public before it reentered on Feb 1, 2003?
14
Any imagery from Shuttle Columbia's SILTS pod on the internet?
10
Challenging the Kármán line from above
43
During the Space Shuttle Columbia Disaster of 2003, Why Did The Flight Director Say, "Lock the doors."?
3
Could DOD earth observation (i.e. spy) satellites have photographed the Columbia Orbiter on STS-107?
4
Did the Apollo Command module really "skip" within, or off of the atmosphere as a part of its reentry program?