First Ham Radio contact from space; what frequency, what kind of antenna, and how did they route the coax out the window?

From Phys.org's Earthlings and astronauts chat away, via ham radio:

NASA astronaut Doug Wheelock was just a few weeks into his six-month mission at the space station when feelings of isolation began to set in. Wheelock would be separated from loved ones, save for communication via an internet phone, email or social media. At times, the stress and tension of serving as the station's commander could be intense. One night, as he looked out a window at the Earth below, he remembered the space station's ham radio. He figured he'd turn it on—see if anyone was listening "Any station, any station, this is the International Space Station," Wheelock said. A flood of voices jumbled out of the airwaves.

The first amateur radio transmission from space dates to 1983, when astronaut Owen Garriott took to the airwaves from the Space Shuttle Columbia. Garriott was a licensed ham who, back on Earth, had used his home equipment in Houston to chat with his father in Oklahoma.

"We thought it would be a good encouragement for young people to get interested in science and engineering if they could experience this," said England, who was the second astronaut to use ham radio in space.

and it goes on to describe "an almost-all-volunteer organization called Amateur Radio on the International Space Station, or ARISS"

Question: For the 1983 ham radio contact mentioned above, what wavelength and what kind of antenna were used, where was the antenna, and how did they route the coax out the window and still keep a good seal? (that last bit is humor)

This happened on the first Spacelab flight, STS-9.

For the 1983 ham radio contact mentioned above, what wavelength...

All ham radio operation for STS-9 will be in the Amateur Radio 2-meter band (144-148 MHz), Dr. Garriott's transceiver will have the capacity to transmit and receive on channels 20-kHz apart. The planned operating frequency range is: Space-to- Earth, 144.510-145.770 MHz; Earth-to-Space, 144.910-145.470 MHz. To simplify procedure, Dr. Garriott will transmit on one or two frequencies only to make it easier to locate him. He will receive on 10 to 20 different frequencies so hams can spread out across the band and not pile up on one frequency. The primary frequency Dr. Garriott will be using when transmitting over the United States is 145.55MHz.

.. and what kind of antenna were used...

The antenna (split-ring on a printed-circuit board) will be placed in the upper crew compartment window on the aft flight deck.

Source, NASA Educational Brief for the Classroom, STS-9 and Amateur Radio This document gives a detailed writeup on the operations.

Garriott is pictured in JSC's Building 9 One-G Trainer with the handheld unit. The edge of the Orbiter starboard overhead window is visible behind him. 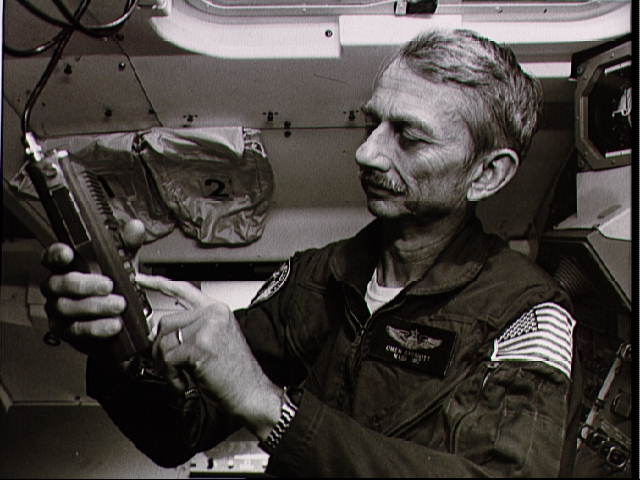 As far as I know, neither the three onboard computer failures, the two auxiliary power units that caught on fire during entry, or the crew mistakes at touchdown were related to the ham radio experiment in any way. (That last bit is humor)

Not the answer you're looking for? Browse other questions tagged space-shuttle history radio-communication amateur-radio or ask your own question.

5
What Soviet-era space-related film is this Nick Stevens tweet referring to?
0
What is the purpose of this cable connecting Astronaut's boot restraint to a robotic arm?
2
Space station Freedom - purpose (specialisation) of pressurized modules
6
When was the ISS's “SPEED LIMIT 17500 MPH” sign originally posted?
3
First radio contact between an Australian and a spacecraft? First voice communications?
1
Does the Juno spacecraft have an “open signal, by design”?
5
What does it take to upgrade a radio antenna to receive from the surface of Mars?